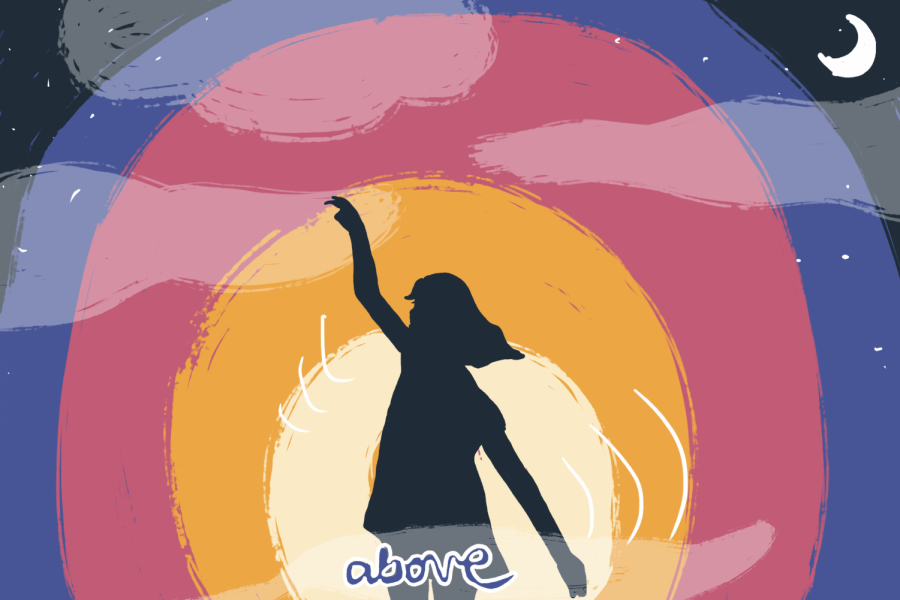 These months weighed on me, but they also lifted a fog — now I’m starting to witness the world with more clarity.

When the world shut down, I became obsessed with the sky. It’s not that I’m an astronomy nerd, but I could stare at a sunset until someone yanks me away (this has, quite literally, happened). I don’t get why I didn’t notice the infinity above me before March 2020; I guess life was fogging up my vision. But a pandemic — one we’ve carried for more than a full spin around the sun — had me looking in several directions at once. One of them was up.

In the second week of quarantine, I stepped outside one evening to find the sky a deep magenta. A crisp rainbow split the clouds in half. Our family of four gathered on the back patio, in awe of the colors, saying “Maybe it’s a sign. Maybe the pandemic will be over soon.”

But even during those calls I would sit on my driveway, admiring the shapes of clouds against deep blue.”

It wasn’t over soon. In spring, three-hour phone conversations became a substitute for seeing my friends. But even during those calls I would sit on my driveway, admiring the shapes of clouds against deep blue. When I got my driver’s license that summer, I became free to seek the sunsets on my own. The spectacle of watching the sky turn shades of salmon and rose served as an anchor. When life took a turn for the worse, the sun was still up there, and the moon was still my friend.

What did I learn from the past 14 months? A lot changes, people leave and dystopian situations aren’t forever away. But despite those difficult shifts, there are still places to look. I find them by craning my neck or sitting on rooftops. There’s beauty in the parts of life I could so easily gloss over, and I intend to notice it now.

There’s beauty in the parts of life I could so easily gloss over, and I intend to notice it now.”

Living looks different these days. I’ve only hugged my best friend twice in the past year, I can’t feel the adrenaline rushes of concerts, dance recitals or pep rallies. This means I’ve been forced to seek “casual magic,” appreciating what I witness around me everyday. The brightness of the moon or the wind in my face when I decide to crack the Prius windows. The peacefulness of crying under a vastness of stars above me or the way morning light hits the trees of my neighbors across the street.

These months weighed on me, but they also lifted a fog — now I’m starting to witness the world with more clarity. I’m starting to feel, and for that, I thank the celestial objects and the rainbows in the atmosphere above. They continue to safeguard my sense of wonder.