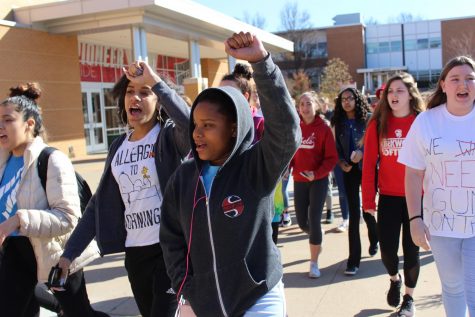 Although every student at KHS sits at the same desks and walks the same halls, each individual does not necessarily have equal educational opportunities. A 2015 KSD task force report, co-chaired by previous school board president Darnel Frost and assistant superintendent Dr. Bryan Painter revealed academic achievement gaps between white and African American students.

“We need to look inside the school and outside the school at how to close [the achievement] gap, one or the other isn’t going to work.”  Michael Havener, KHS principal, said. “Everything needs to be looked at.”

KSD organized this task force in 2015 to address the academic gap, as well as to make  recommendations to the school board for closing it. They did so by listening to the community and members of KSD. The discussions and evaluations were conducted for the purpose of understanding and eliminating the achievement gap.

Within the task force, a diverse group of over 70 community members and faculty met to address the various aspects of the achievement gap. They started with general meetings and breaking into smaller, more concentrated groups, which met and produced a report with a comprehensive evaluation of the gap.

“What we are trying to do is look at it differently,” Frost said. “This isn’t going to be an easy fix, and we have to [take] a hard look at ourselves. That’s what we’ve been trying to do… make it an institutional alignment. How can we make our institution fit every student that we can?”

Havener believes in the importance of pushing minority students, especially African American students, into higher-level classes as a way to close the gap. He also realizes that no one answer will solve the problem, as the achievement gap is a complex issue.

Jim Cibulka, physics teacher, shares this opinion, yet realizes the challenges presented in pushing these higher-level classes, and making them accessible and welcoming for all students. Cibulka is hopeful that the efforts made by KSD to close the achievement gap will pay off.

“I do think that we need to push and support more African American students into higher level classes.” Cibulka said “We need to support them. It might feel strange at first to have maybe a support group for one group of students and not  another group, but I think we need to push through that so we can see the payoff, the light at the end of the tunnel.”

In addition to addressing how advanced placement and higher level classes can be made more accessible for African American and other minority students, the task force also took the approach of evaluating how the buildings themselves can better reflect the diversity of the students through a program called Equity Walks, one of the proudest accomplishments of the task force. Individuals of various races and ethnic groups participated in walks throughout KSD buildings to evaluate them. Walk participants evaluated the representation of minority and African American students in photographs and decorations throughout the building, as well as other aspects.

“One thing that is really important when you’re talking about minorities is, are they seeing themselves?” Frost said  “Not only as far as the staff, books and curriculum, but on the walls and things in your building . Are you representing all minorities? When someone walks into your building, they may be a Hispanic or an African American person, are they seeing themselves reflected so that you show that what’s important to you is the same as what’s important to them? We’ve had different races walk through some of the buildings and they tell you what they see and what they don’t see.”

“I cannot really pinpoint exactly why we were pretty unsuccessful.” “There’s a lot of things you can look at, you can go to class issues, you can go to so many things,” Frost said.

Cibulka expressed a tone of hopefulness for the future of racial equity in  KSD and at KHS. According to him, KSD has taken steps to look at and address the issue, some more successful than others, but has attempted to address the underlying problems

“ I learned from a principle many years ago that actually Looking at data and achievement is an important thing that a lot of school’s were not even bothering [to do].” Cibulka said “they just let kids flunk, they let kids not achieve, they didn’t worry about them,They did nothing for those students by letting them politely fail. I expect a lot out of all of my students, and I think that holding high expectations for everyone is a form of, and it may look tough and it may look mean, but its a form of being not bigoted.”