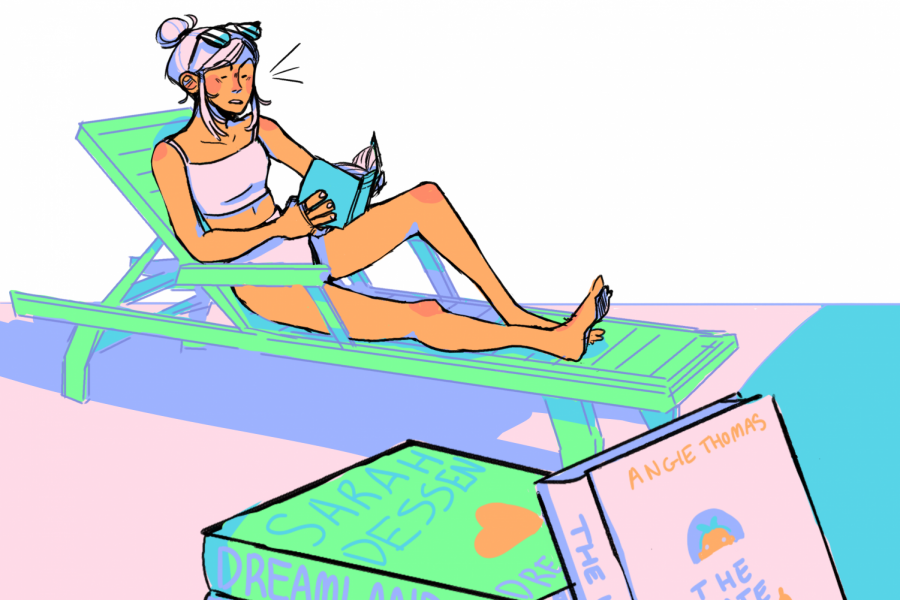 Since students do not have assigned reading this summer, the have the chance to read books they might find more interesting.

You may not have any summer homework this year, but that’s no excuse to stop reading. While some of you may have camp or vacations planned this summer, those of you who will be sitting on the couch for three months straight need a book, or five, to spice up your break. It might even slow down the “summer slide,” when students forget months of material during summer break.

If you’ll be reading anyway this summer, the books below will be great additions to your TBR (to be read) list. If you weren’t planning on picking up a book, then it’s time for a change of plans. The books below will give you a better understanding of many issues affecting teens today, in addition to hours of fun and relaxation. So, without further ado, here are five books you should read this summer.

This story follows Caitlin, a cheerleader struggling with the news that her sister has run away from home. Later on, she meets a drug dealer named Rogerson at a party, and gets into a relationship with him, one that turns abusive. Caitlin doesn’t know how to leave and get help. “Dreamland” teaches high schoolers to recognize signs of abusive behavior, but avoids sounding preachy by telling the story through a high schooler’s perspective.

The Hate U Give

While driving home from a party, Starr and her longtime friend Khalil get pulled over by the police. Just minutes after, Starr witnesses the tragic, racially motivated shooting of Khalil, which greatly impacts her community. Throughout the book, readers see Starr decide to speak up about her experience in a testimony before a grand jury. All the while, she maintains a balance between her home life and life at a predominantly-white private school. “The Hate U Give” is a powerful story about race told from a teen’s point of view.

“Some Boys” portrays the aftermath of sexual assault through the perspective of Grace, a high schooler who was raped by the most popular boy in school, Zac. Grace faces friends and teachers who don’t believe her, and even confronts the rapist himself while rumors circulate through the hallways at school and social media. The story switches between Grace’s perspective and the perspective of Ian, who has a crush on Grace but is also Zac’s best friend.

The Memory of Light

“The Memory of Light” is a story about a teen named Vicky who has just woken up in the hospital after a failed suicide attempt. The doctor decides it would be best for her to stay in the hospital for a couple weeks before returning to her normal life. So, Vicky joins group therapy, where she makes friends who help her heal. Over the course of the book, Vicky learns to confront her depression in both her therapy sessions and eventually her return home.

After her best friend Cassie dies of an eating disorder, Lia struggles with grief, guilt and an eating disorder of her own, anorexia. “Wintergirls” tells the story of Lia’s life after Cassie and her journey from anorexia and self-harm to the start of her recovery.