After 785 days of waiting, our prayers have been answered. Frank Ocean released an original single, “DHL,” at the end of the first episode of Ocean’s Beats 1 radio program, “blonde Radio.” Although this song came as a surprise, according to Genius, Ocean hinted at this song through an Instagram post of a DHL plane on August 1, 2017 and a teaser for “DHL” on his Instagram story on December 18, 2018.

Along with the release of “DHL,” Ocean released a teaser for two more singles, “Dear April” and “Cayendo,” during his PrEP night club event, an invite-only party for creating safe spaces for queer people. According to Genius, this could be a part of a new album titled “FO4*” expected to be released in 2020. “Dear April” and “Cayendo” are both going to be released on vinyl on blonded.co.

Although “DHL” holds that classic dreamy Frank instrumental and lyrics that blend with the beat to sound nearly inaudible, this is a new era. It took me a couple listens to dig it and understand the lyrics. According to Genius, this song describes Ocean in a same-sex relationship, which is evident from lyrics refering to a “boy-toy” or “BF.” Since posting a letter on Tumblr about his sexuality in 2012, Ocean’s sexual orientation has been mentioned subtly in his songs, however in this song it’s more bold.

Ocean is puzzling. Everything from his periods without releasing music to his Instagram shows there is no doubt that he is a genius. Ocean has a large fan-base and is constantly questioned for the way he disappears from the music scene, but honestly it could be all planned out. Ocean released “channel ORANGE” and “Blonde,” four years, seven months and 19 days apart from each other. It’s been three years, two months and one day since the release of “Blonde.”

Ocean is an artist that stays off the radar. Every interview he does is called “rare” and articles are constantly written about where he could be. He has never gone on a full world-wide tour, and although Ocean has collabed with extremely popular artists like Beyonce, he tends to keep to himself. The genius of Ocean is that he’s able to build up the momentum for his return because of the way he runs his career. There’s a constant state of wonder about Ocean, and that’s what makes him likeable. “DHL” was a surprise single with no promotions, and those lucky enough to have been listening to the radio program got to hear it. The release of “DHL” is a reflection of Ocean. He’s mysterious and surprising.

I can continue my 2019 in peace due to this surprise drop. The time between albums and hint drops allude to his strategy. So, Frank, feel free to release your album earlier, but I expect an album by April 8, 2021.

Don’t think you can wait for another album? Check out unreleased Frank Ocean on his Soundcloud 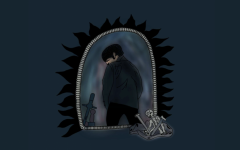