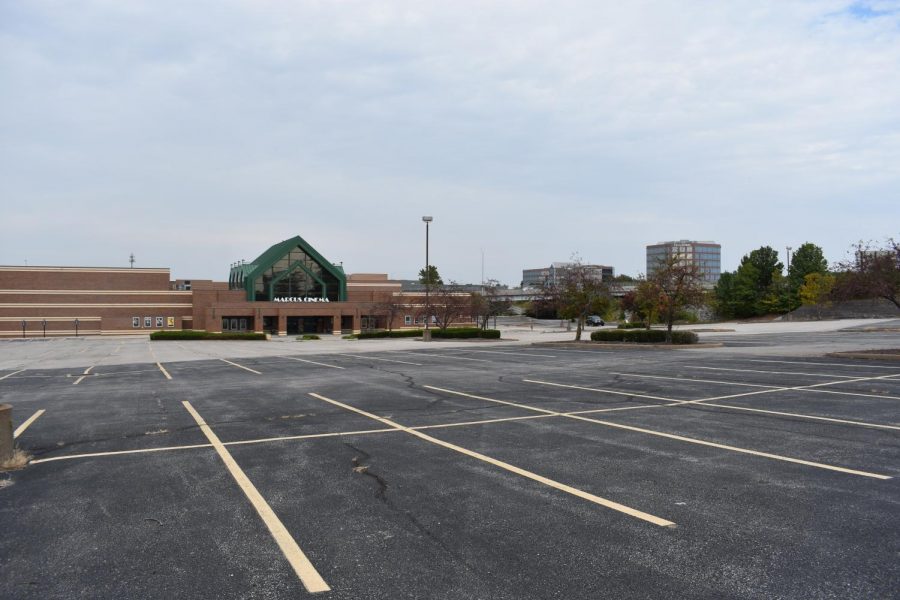 Marcus Des Peres Cinema is temporarily closed during the pandemic.

You find your seat in a dimly lit cinema. The scent of buttered popcorn wafts through the room as the previews roll. People come shuffling in as anticipation builds for the feature presentation. You’re settled into your recliner, ready to escape into a new and exciting world for a few hours. For most of the pandemic, experiencing that movie theater magic has been something out of reach for many. Now, Hollywood is having to learn how to keep creating art in a less than convenient time.

It is a streaming world, with Netflix and Prime Video frequently earning award nominations for their original films such as “The Irishman” and “The Big Sick.” In April 2019, there was a rule implemented by the Academy Awards that in order to qualify for Oscar nominations, a movie must run in theaters for a week. The beginning of the COVID-19 pandemic in March, however, showed cinema box office numbers plummeting nationwide. Between March 13 and 15, America saw its lowest recorded weekend box office revenue since 1998, at only $58 million. Movies like “A Quiet Place 2” and “Onward” were a few of the earliest movies affected in America, with “A Quiet Place 2”’s showing delayed until April 2021, and “Onward” being moved to Disney Plus after being in theaters for a month.

Video on Demand (VOD) releases started to become the new normal over time, with titles like, “The Invisible Man” and “Birds Of Prey” being released to VOD earlier than originally planned. Several highly anticipated pictures have been delayed because of COVID-19, mostly due to the delay of ‘Black Widow’ from May to November, which created a domino effect within the Marvel Universe. Production for shows like “Falcon & The Winter Soldier,” “WandaVision” and “Loki” halted in March 2020, lasting until early August.

“I was looking forward to ‘Black Widow.’Everything’s pushed back now in the entire franchise and it hurts,” Hailey Heaps, junior, said. “Onward was really good. It’s really sad that it had to go onto a streaming service because they do a lot better when they have them in theaters first.”

However, there’s still a way to go to the movies: the drive-in. Drive-ins are a rarity that were popular in the late 1940s-1960s in smaller towns. When movie theaters first closed, people didn’t know if drive-ins would be a safer option. But as with most businesses, drive-ins adapted to meet social distancing guidelines and still provide movie magic. They made a comeback this summer, as people looked for a way to get out of the house.

Before the pandemic, Jeannie Smith, senior, would go to the Des Peres Cinema every Tuesday and see a movie with her dad, but usually attended two or three times a week. Since then she hasn’t gone, but has turned to the alternative option of drive-ins.

“[At the drive-in], you had to park at least ten feet away from each other in your cars and no one was [moving] around, during the movie at least,” Jeannie said. “I didn’t feel like we had to go near people because there was [enough] space.”

Although most local drive-ins seem to be pretty far from Kirkwood, Skyview Drive-In Movie Theater is only a 30 minute drive to Litchfield, Illinois. Jeannie went to Skyview in June to see “Indiana Jones” with Sophie Smith, senior. They had a mattress in the bed of a truck to lay on while watching the movies.

“It was my first time [going to a drive-in] so I didn’t really know what to expect. They had a concession stand and snow cones,” Jeannie said. “They had on their website two different screens that they had set up, and you had to choose from those two.”

Jeannie said that since going, she’s had more people wanting to go with her. Only 12.9% of KHS students (20/258) have seen a movie at a drive-in in the last six months.

“There’s been a couple movies that I’ve seen come out that I want to see, like ‘After We Collided’ or ‘Tenet’,” Jeannie said.  “I want to see both of those and I’d rather do it in a movie theater than at my own house, because I like going to movies and being with friends when I do it.”

Heaps is one of the leaders of the Film Club.  She said the club is a little upset about the pandemic’s disruptions, since they had to postpone production on the club’s movie.

“Right now, everyone is working on little individual home movies, if they want to anyway, that was optional,” Heaps said. “We do plan on continuing it if we get back to school.”

Heaps said she would like to make a home movie if she could. Her brothers and family make home movies on their iPad and show it on a projector.

“There’s not a lot of filmmaking passions these days and I think there should be, because it’s actually really fun to do.” Heaps said, “I wasn’t really into filmmaking until we started the club but it’s super fun.”

Heaps said she would not go see movies in an actual theatre. Heaps said that it’s because it’s not well ventilated and in an enclosed space.

“I would 100% go to another drive-in, any day of the week. They’re so fun. You can go when it’s late at night, it’s nice and cool outside and you can go with your friends and sit in the trunk of your car and eat snacks,” Heaps said. “The snacks are the best part. The movie doesn’t even have to be good. Plus, then you’re not at a theatre, so you can talk without everyone judging you.”