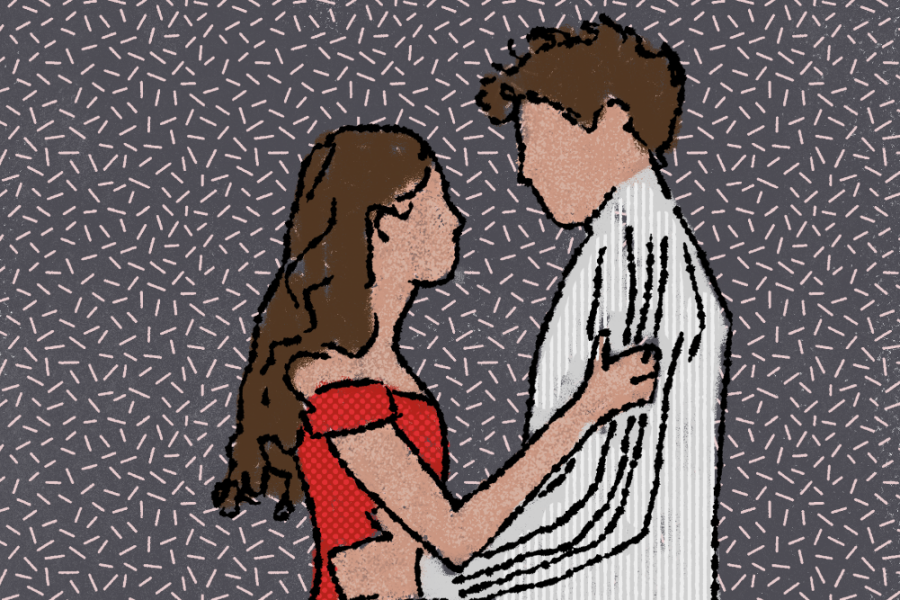 Is Olivia Rodrigos debut single, "drivers license," about her costar Joshua Bassett? And how did Sabrina Carpenter get involved?

Olivia Rodrigo, 17-year-old singer, songwriter and actress, has received tons of attention over her debut single, “drivers license” since releasing it Jan. 7. The song has all the traits to become the next teen heartbreak anthem: painfully relatable lyrics, strong vocals and a catchy bridge. It has already made its way around TikTok and has held the number one spot on the Spotify and Apple Music charts since its debut. The song even broke Rolling Stone’s Top 100 record for the biggest debut. But more alluring than the song itself is all the celebrity drama it revolves around.

The lyrics and music video for “drivers license” depict Rodrigo driving past her ex boyfriend’s house and thinking about their breakup. Fans immediately jumped to the conclusion that the song is about Joshua Bassett, Rodrigo’s costar and love interest in the Disney Plus original, “High School Musical: The Musical: The Series” (HSMTMTS). This theory makes sense, considering that Rodrigo and Bassett have a rumored relationship on and off camera. The hit show follows the rocky relationship between Nini (Rodrigo) and Ricky (Bassett), culminating in an epic declaration of love from Ricky, which was actually improvised by Bassett.

The endearing scene, first aired Jan. 11, 2020, led fans to think there might be romantic interest between Rodrigo and Bassett, not just between their characters. Though the two never confirmed or denied that they were dating, many fans have speculated (and hoped) that it might be true. This led to the large success of “All I Want,” a song by Rodrigo originally written and recorded for HSMTMTS, which also circulated on TikTok for many months. Rodrigo and Bassett drifted out of the limelight as no news emerged, until Bassett was spotted with singer-actress Sabrina Carpenter in July 2020.

Bassett posted a TikTok of him and Carpenter dressed as Sharkboy and Lava Girl for Halloween, which got over 16 million views. This was all the proof fans needed to assume the two were dating, but they didn’t think much of it until the release of “drivers license.” The song hints at Bassett and Carpenter’s relationship, especially with the lyric “You’re probably with that blond girl / who always made me doubt / she’s so much older than me / she’s everything I’m insecure about.” Carpenter, 21, is four years older than Rodrigo and blonde, so she fits the description. Rodrigo has not clarified who the song is about, but that didn’t stop millions of fans from turning on Bassett in a heartbeat out of sympathy for Rodrigo, going as far as filling his Instagram with hate comments. Many fans are now in a desperate hunt for clues to figure out the love triangle between the three celebrities.

To add even more drama, Bassett released a single of his own, “Lie Lie Lie,” on Jan. 14, one week after the debut of “drivers license.” Bassett claimed the song is calling out a close friend of his who has been spreading rumors about him, which is apparent in lyrics such as “So you’re telling them it’s all my fault / You’re the victim this time, oh-oh-oh.” It is important to note, however, that both “drivers license” and “Lie Lie Lie” were originally written during or before filming for HSMTMTS. Neither Bassett nor Rodrigo have confirmed if the songs are related, but fans are sure that “Lie Lie Lie” is a personal call out to Rodrigo.

But it doesn’t end there. Carpenter released her own single, “Skin,” on Jan, 22, teasing the song on her Twitter the night before. In the song, Carpenter claims she won’t let anyone get “under her skin” for “telling her side of the story” about her relationship. The lyrics are vague enough that tagging it as a response to “drivers license” is a stretch. Th

at is, until the line “Maybe you didn’t mean it / Maybe ‘blonde’ was the only rhyme.” This lines up all too well with Rodrigo’s own lyrics to deny the song’s relation. Now fans are really torn; some are furious at Carpenter for writing a call out song in response to a minor. Others claim it is her rightful place or that Carpenter has been teasing “Skin” for a while before the “drivers license” drama. Following the pattern of Rodrigo and Bassett, Carpenter still has not commented on who the song is about. All the ties between the three songs are solely fan-based.

At this point, the “drivers license” saga is just too good to be true. Because the three songs line up so perfectly, some fans claim that Rodrigo’s heartbreak in the song is inauthentic. Why would Rodrigo intentionally start drama between herself and Bassett when HSMTMTS has been confirmed for a second season and they will surely have to work together again? Fans also noticed that Bassett promoted “drivers license” on his Instagram story, either oblivious or apathetic that the song may be about him. These fans claim Bassett and Carpenter are in on it and that they worked together with Rodrigo to stage the perfect heartbreak story for their singles.

If this is the case, they certainly knew what they were doing. “drivers license” already has over 125 million streams on Spotify and over 41 million views on its music video. Whether or not the song was staged, or whether it was even about Bassett and Carpenter in the first place, Rodrigo succeeded in causing millions to feel her heartbreak with her. Despite the drama it created, or maybe thanks to it, “drivers license” launched Rodrigo’s career out of its childhood Disney star phase and into a new era of classic, relatable songwriting.