Movie Review: Shang-Chi and the Legend of the Ten Rings 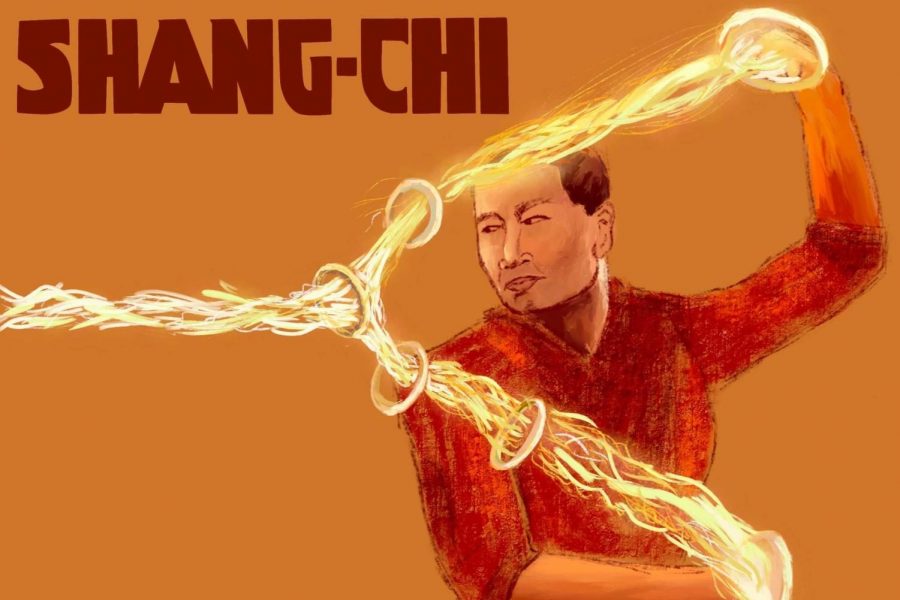 In Shang-Chi, Marvel offers more Asian representation than ever before, but fails to live up to fan's expectations.

Dragons, ninjas, flowing silk garments; all stereotypical markers of Asian culture, and all used in Shang-Chi and the Legend of the Ten Rings so that Marvel can gain its diversity points without actually delving into a beautiful culture. The movie, starring Simu Liu and the beloved Awkwafina, is the newest installment in Marvel Studios’ cinematic universe. Full of underdeveloped characters with vaguely explained backstories, stale one-liners and fight scenes oozing with CGI, Shang-Chi matches all of Marvel’s hallmarks.

Shaun Chi, your typical lazy, content-with-mediocrity millennial, is satisfied with his life working as a valet driver alongside his similarly-minded childhood friend Katy. He wakes up each day in his tiny, messy apartment and dresses for a long day of parking fancy sports cars for wealthy businessmen, then returns home to repeat the routine the next day. Until he is attacked by a group of ninjas on the bus, forcing him to reveal his true history to Katy.

Shaun Chi explains that he is actually Shang Chi, and that his father, Wenwu, discovered ten mysterious rings that grant him immortality and godlike powers. These weapons have enabled him to topple governments and gain incredible wealth over the last few millennia. Wenwu had been lying low for the past decade, but it becomes clear that he has come back for his estranged son.

Shang-Chi was marketed as Marvel’s first film with Asian representation, stirring excitement and praise among fans. While the cast is made up of Chinese actors, and a portion of the movie is in subtitled Mandarin, this is the extent of the effort Marvel Studios put toward portraying Asian culture in this movie.

I appreciated that the cast offered significant Asian representation, and many Asian fans have been pleased to see themselves represented in the MCU for essentially the first time. Awkwafina, as always, offers a welcome break from the nonstop fight scenes in this movie through her charmingly obnoxious humor, but it seems as if she has become Hollywood’s token funny Asian actress — she also played comedic supporting roles in Crazy Rich Asians, The Farewell and Raya and the Last Dragon, movies that marked major steps in Hollywood’s crawl towards sufficient Asian representation. While she performs these parts flawlessly, I wish Marvel could have found fresh faces to represent Asian talent in this movie.

Much of the movie is set in China, and many scenes revolve around martial arts, dragons and ninjas, but at no point does the plot delve further into Chinese culture than this. It seems as if Chinese culture is used as a plot device in place of actual story. The talent of the only character to ever defeat Wenwu is chalked up to an unexplained form of martial arts. Characters receive directions from a shower of water that shoots from the nose of a wooden dragon, twists into a map and then is never mentioned through the rest of the movie. While the diverse cast and addition of Mandarin into the film is progress for Asian representation in Marvel’s oeuvre, the effort is surface-level and I wish they had done more to incorporate a rich culture into the actual plot of the film.  Marvel delivers a thrilling action packed film with more representation than ever before in Shang-Chi, but fails to live up to fan’s hopes and expectations.