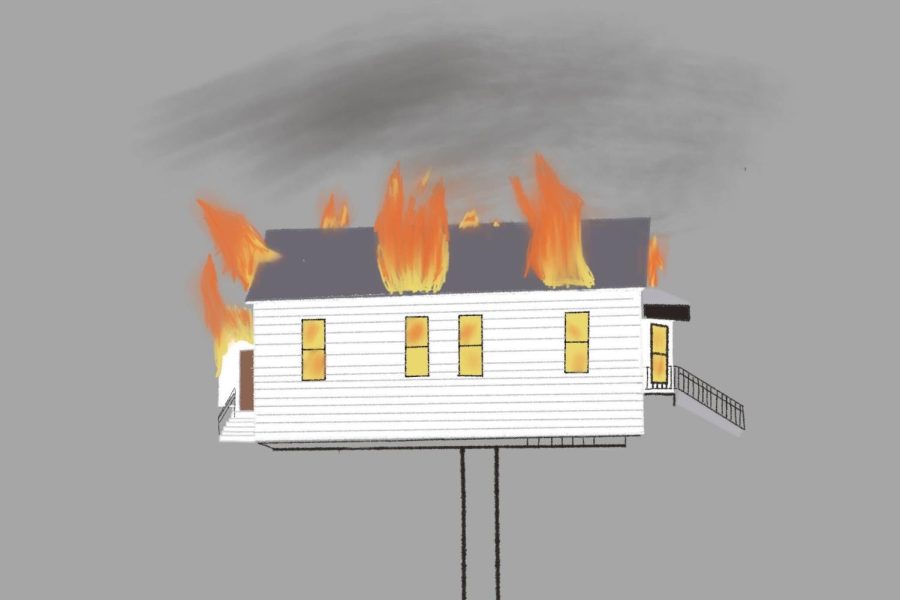 This burning house has been in many posts on Kanye West's Instagram. The house represents his childhood home in Chicago.

A mysterious photo of a house engulfed in flames plastered with the numbers “2 22 22” was posted on Kanye West’s Instagram account. The house in the photo represents Kanye’s childhood home in Chicago, and is the same house that was flaming in Kanye’s third listening party promoting the release of “Donda.” This photo, posted on January 27, reveals the release of “Donda 2” on Feb. 22, 2022.

“Donda 2” is executive produced by rapper Future. Kanye has also been seen working with artists like Mike Dean, Travis Scott, A$AP Rocky, French Montana, Big Sean, Moneybagg Yo, Blueface, Pressa, Fivio Foreign, The Game, will.i.am., Cardi B and Scarface for “Donda 2.” Clues for possible features on “Donda 2” were scattered throughout his Instagram before he deleted most of his posts. Kayne deleted a photo of him, Fivio Foreign and Alicia Keys, and another with Travis Scott, Baby Keem, Yung Lean and Drake for a studio session in Los Angeles.

You may be surprised that Drake might be featured on the album. After a long feud between the two, Kanye and Drake finally made up around mid-Nov. 2021. Around this time, Drake invited Kanye over to his Toronto home where they agreed to perform on stage together the next month in Los Angeles.

An artist that is not on the album, surprisingly, is Kid Cudi. In an ugly internet argument, Kanye went as far as removing Kid Cudi from “Donda 2” because “he is friends with you-know-who,” referring to Pete Davidson. Kanye’s hatred for Davidson began after his divorce with his ex-wife, Kim Kardashian, who is now dating Davidson.

According to Pitchfork, Kanye will host a listening event for “Donda 2” the same way he did for the original “Donda.” On February 12, Kanye shared a post on Instagram of a house engulfed in flames, captioned, “DONDA 2 2 22 22, LOANDEPOT PARK STADIUM MIAMI, On sale Monday @ Noon,” announcing another listening event in Miami leading up to the release of “Donda 2.”

Feb. 22, 2022 may not be the official date the album drops. Kanye might push back the release of “Donda 2” the same way he did with his other projects, such as “The Life of Pablo,” “Ye,” and “Jesus Is King.” Not to mention, Feb. 22, 2022 is on a Tuesday, which is a strange day to release music. Most artists drop music on Fridays to maximize their chart potential. Whether or not “Donda 2” gets released on Feb. 22, 2022, the day still marks importance in Kanye’s music legacy.