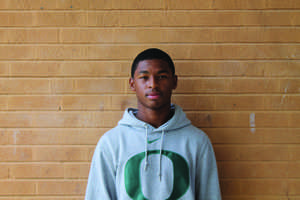 There are 145 new students at KHS this year from all different places. The Kirkwood Call chose five students at random and asked for their stories.

For Jerod Alton, becoming a Pioneer meant bringing home the state championship for a second time.

Alton, sophomore, went to Pattonville High School his freshman year but his parents suggested he transfer to Kirkwood. He was not nervous to come to KHS because his older brother had previously attended. So far Alton said he has made strong relationships with his teachers and his peers. And after two weeks of attendance, Alton said he loved everything about KHS.

“The teachers are great here, they spend time with you and just help you with your work,” Alton said.

Alton plays football as a running back/defensive back on the varsity team this year and has high hopes to help KHS win the state championship two years in a row.

”I think they’re wonderful,” Alton said. “The coaches are really in tune with you, and they really try to get their players off to college and prepare them not just for football but for being a man and growing up and taking full responsibility in what you need to do.”

Christie Killeen, junior, felt she had an advantage over other new students transferring to KHS her this year.

Since middle school she has hung out with her Kirkwood friends on the week- ends.

Killeen said she left the Kirkwood School District because her parents wanted her to attend Rosati-Kain. She chose to leave Rosati-Kain, however, because she wanted to be with her friends.

Five of her older siblings attended KHS so her family knew what to expect. She is most looking forward to trying out for swim team because she enjoyed swimming at her old school.

So far KHS has made a good impression on Killeen.

When Lisa Kerchherr moved to Kirkwood this summer, she was no stranger to the new-kid drill. Although Kerchherr moved from Pennsylvania, over the course of her life she has lived all over the world, from Alaska to Hong Kong.

“Out of all of my switching schools experiences, [KHS] has been the easiest,” Kerchherr, senior, said.

Kerchherr said KHS has an overall better atmosphere than the high school she attended in Pennsylvania. She said the people are more open, and the student body is less competitive.

“If you’re not super into AP and honors [classes] you don’t get crap for it [at KHS],” Kerchherr said.

Kerchherr started running with the girls’ cross country team this summer and said knowing a group of people before school started helped her adjust to KHS.

“My first day would have been hell,” Kerchherr said. “Cross country has been really helpful.”

“It’s been pretty easy, thanks to the team,” Kerchherr said.

Paulina Pennanen left her home in Finland this summer to live in Kirkwood through the foreign exchange program Council for Educational Travel, USA (CETUSA).

“Everything’s bigger [in America],” Pennanen, senior, said. “[But] everything works the same. Someone asked me if we have escalators in Finland, and we do. It’s all the same.”

According to CETUSA’s website, the motto of the exchange program is “Founded on Friendship.” CETUSA strives to make the world a smaller, friendlier place by building bridges across cultures. The program requires participants to stay with a host family to better immerse themselves in the foreign country’s culture.

“[Staying with a host family] is not that different,” Pennanen said. “You just don’t have your own family around. I think it’s normal.”

Although Pennanen believes Finland and America have many similarities, she said KHS is different from her high school back home.

“There is a lot of school spirit here,” Pennanen said. “No one at my school in Finland had any spirit.”

Pennanen is enjoying her time at KHS, saying the people make it a wonderful place to be.

“Everyone has been really nice and really friendly,” Pennanen said. “It has been fun so far.”

Booth has family in Kirkwood so she was not nervous to come. This year she is looking forward to football games and meeting new people.

She is also planning on trying out for cheerleading her sophomore year.

Booth had mostly positive comments toward KHS, but her only complaint is having to wake up so early for school.

“I like it so far. It’s way better than my old school because we learn more and the classes are able to be taught,” Booth said.

Booth has been able to adjust to the quick transition from Riverview to Kirkwood and feels welcomed as a new Pioneer.