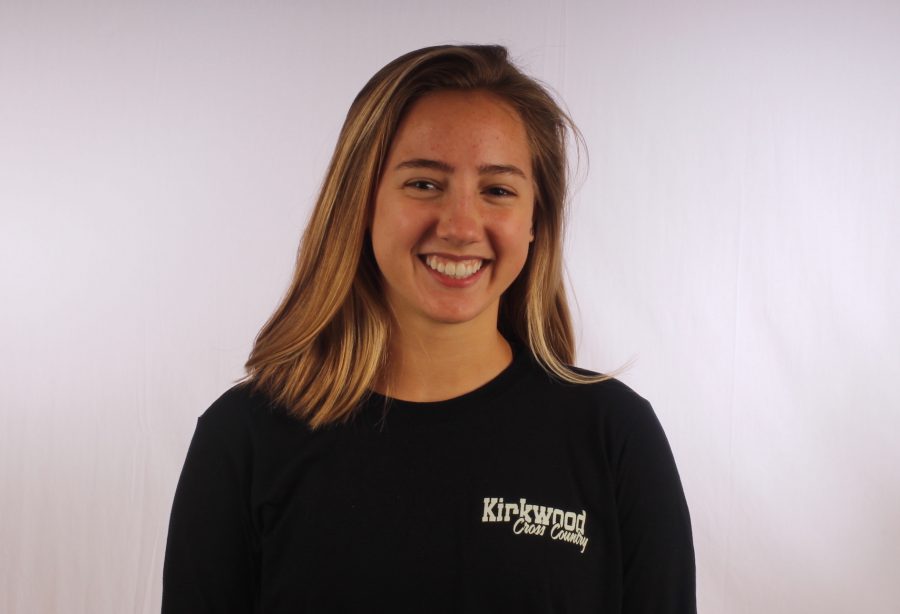 As hundreds of people begin to stretch, jump and retie their shoes, Molly Hooks feels the familiar nervousness that comes before any race, but today is different. The starting gun will not begin a 3- mile cross country race. Instead, it will send Molly on a 26-mile trek through downtown St. Louis.

Molly has been running 5Ks since she was 5 years old but started taking it seriously freshman year when she joined the girls’ cross country team. It started as something expected of her since both of her older brothers ran for KHS cross country, but running quickly turned into something she loved.

“[Cross country] provided me with great friends, great memories and it forced me to exercise,” Molly said. “I know it was good for my physical health along with my mental health.”

During Molly’s junior year, life became hectic. Her day consisted of cross country, AP and honors classes and a job. The time spent running each day was important to her, despite the voice in her head telling her to stay home and work.

“I just need to keep reminding myself that once I get to the driveway, I’ll be good,” Molly said.  “But it’s the getting out part that’s hard.”

Molly said her mom, Sue Hooks, is her biggest supporter. Sue helps Molly find balance in all parts of life but also understands how taking time to run each day can be beneficial.

“There are some people who think while they run, they set out to solve problems or difficulties in their life and running helps them come up with a solution to it,” Sue said. “Other people might be feeling stress in their life and they want their run to be an escape. Whatever you’re experiencing at that time of your life running can give you what you need.”

Molly ran her first marathon on April 9, 2017, but the 26-mile Sunday morning race was not the only reason she spent countless afternoons training.

“I don’t think the reason people should [run] marathons is just for the one day, the one outcome of the one race,” Molly said. “You should do it because of the training process and the overall marathon experience.”

At the end of the cross country season in October 2016, Molly approached Gina Woodard, health teacher and girls’ cross country coach, asking if a marathon was even a possibility. After positive reinforcement from Woodard, Molly began the 25-week training program.

“High school runners come and talk to me about training for a marathon, and I’nm usually not interested in having a conversation with them about [it].” Woodard said. “It sounds really cool to do it, but sometimes it can be a lonely and exhausting endeavor. You don’t have people cheering you on when you’re running 26 miles by yourself on a Sunday morning. I know she’ll be successful because that’s what she does.”

Molly finished the marathon in three hours and 42 minutes, seven minutes shy from qualifying for the Boston Marathon. Not even this could discourage her. She finished the marathon which was her only goal.  “I definitely feel accomplished, proud and honored to have so many people coming up to me and giving me compliments because at this point I don’t feel like it’s a big deal,” Molly said. “[Running a marathon] didn’t really seem out of the ordinary but now I come back to school and everyone is talking about it, so I guess [that] reminds me it was a special thing.”