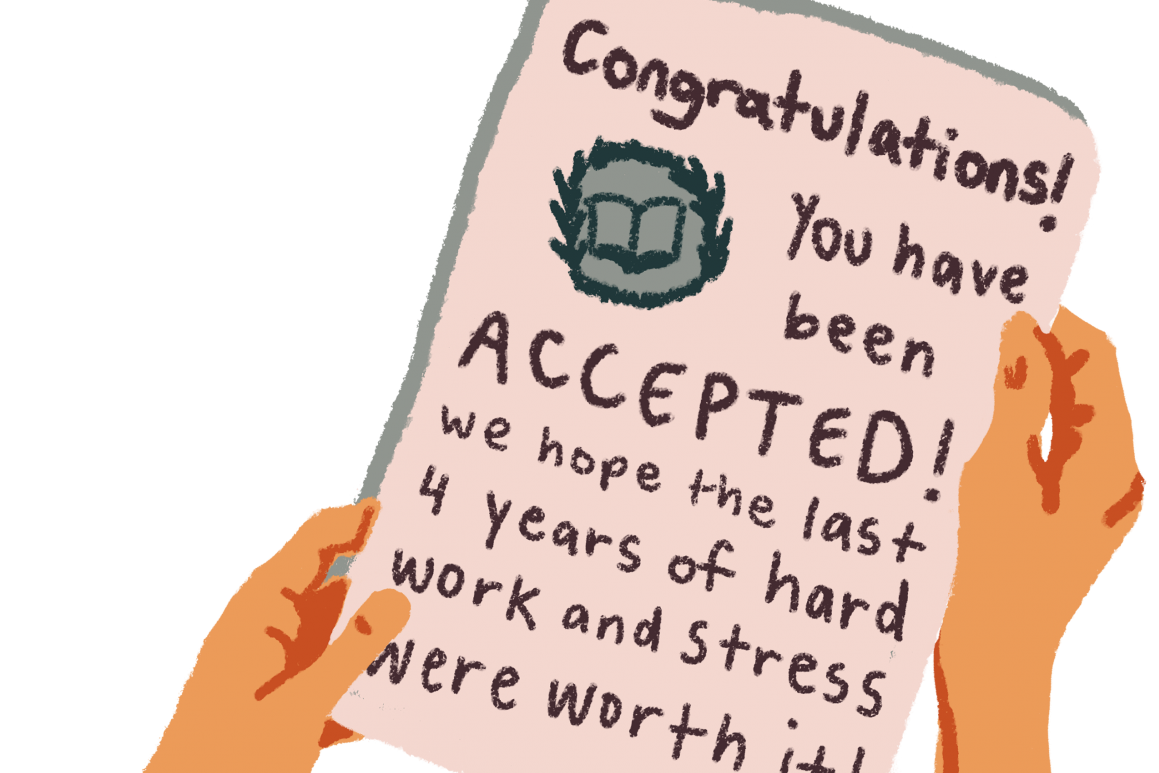 Many students devote their high school years to meeting the requirements for college, only to find another four years waiting for them once theyve been accepted.

London Bielicke, senior, smiles proudly at her high school transcript, recalling the struggles and triumphs of each class. Her 11 AP classes sit like badges of honor in her mind. She’s taken and retaken standardized tests that make AP quizzes look like a kindergarten spelling test. She’s met with her college counselor and her CommonApplication was finished in June.

The first round of early decision and early action college applications are due Nov. 1, but Bielicke said she has been working toward her dream school since middle school. She said although she enjoys learning, she puts a lot of pressure on herself to be good enough to get accepted to Vanderbilt.

“I’ve tried to keep my grades up,” Bielicke said. “I think the main thing that I have is my rigorous course load. I’m trying to raise my ACT score right now, because right now it’s at the lower end of the schools im looking at. I know I [can] do better.”

Even students who are just beginning to consider their college options must go through the detailed application and decision process. According to Abby Peterson, college counselor, one prominent stressor includes forcing students to decide on their futures at such an early age, which can be detrimental to self-esteem and mental health.

“There’s a very large community of individuals that are always asking high school students the same questions,” Peterson said. “You want to provide answers to make it sound like you’re really going big, and it’s a false sense of reality you feel you have to create. You start to feel those burdens and pressures and it just keeps building.”

According to the National Institute of Mental Health, repetitive stress can lead to many physical and mental disorders in students. Dr. Michael Havener, principal said high stress levels can also cause a significant lack of success in students.

“Usually, if you see a negative performance level, it’s because a student shuts down,” Havener said. “[Their work] is just so overwhelming that they almost freeze. And that numbness or freezing just makes everything stop. They don’t know what to do, when to do it and how to do it, so people just do nothing.”

However, according to Helena Verbrugge, sophomore, she is still doing everything she can to set herself up for success. Verbrugge is taking or has taken four AP classes and she is a Girl Scout and member of the Pioneer Pride marching band. She said keeping up with her advanced classes and busy schedule can be difficult.

“I just feel stressed all the time [so] I don’t really notice it anymore,” Verbrugge said. “There are some days when I wish that I could not do any homework, but that’s not possible, because I have to constantly be doing homework.”

Ezra Mendelson, sophomore, says he continues to keep his options open for college. Though he has not decided where he wants to go, he said college is important to him and he understands why many students strive for elite schools.

“When you set a goal, [it’s] your dream,” Mendelson said. “If you don’t achieve your dream then you feel like you did something wrong. So you go to any extent to achieve [it].”

Peterson said though the college process is individualized, many students set goals for the wrong reasons, or choose elite colleges simply because of their well-known name or low acceptance rates. Priscilla Baker, academic advisor at Virginia Polytechnic Institute and State University, said this sometimes causes kids to pick the wrong school for them. 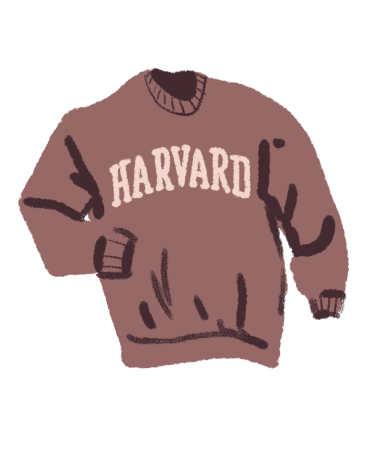 “I think what is unhealthy is the pressure students put upon themselves,” Baker said. “You need to find a balance of an institution that will meet your personal needs and fulfill your career goals. But those can and will change throughout your years in school, so you don’t want to make a decision based solely on what you think you want right now. Big picture is key, but it is challenging to step back and see that when you are 17 years old.”

Rounding out and perfecting a college transcript often brings stress, but this is can be multiplied for teenagers who choose to strive for elite schools due to their long lists of requirements expect high GPAs, excessive course loads, extracurricular activities and volunteer work from applicants, but this might be necessary to select the students they are looking for, according to Baker.

“They can afford to ask [for] whatever they want because their applicant numbers far exceeded the number of spots they have,” Baker said. “Elite colleges have the luxury of being able to be choosy.”

Verbrugge also said she noticed this high-stakes mentality in both high school and college. Verbrugge hopes to earn a scholarship from Missouri University of Science and Technology to study environmental engineering. She said she has chosen her high school schedule based on that dream, weighing heavily in science and math classes so stand out academically.

“The only way they’ll recognize you is if you really excel and do better than most people, which is very unfair,” Verbrugge said. “It’s the stated law of you’re either average or you’re Albert Einstein and you’re not really recognized for the in between.”

However, many experts argue college admissions have not always been this way. Havener said students are pushed to be much more qualified than they used to, making it more difficult to achieve the same number of

spots offered by colleges. The percentage of high school graduates who attend college is also increasing. In 2016, it stood at 69.7%, compared to 50.1% in 1966, according to the Bureau of Labor Statistics.

“I think that we encourage our students to do more than in the years past, which allows them to possibly qualify for other colleges,” Havener said. “It may cause them a little stress, but it also gives them experience. We need to make sure those expectations are reasonable and not pushing kids over the top and causing harm.”

According to Joshua Jaworowski, KHS college counselor, another change in the college process has been the financial factor. He said because institutions charge more today than in past years, students must choose their school based on scholarships and affordability as well as personal preference. 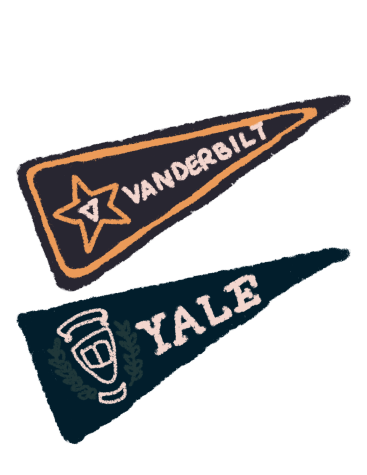 “I think one of the reasons students are applying to more colleges today than they did 25 to 30 years ago is they want to make sure they don’t miss out on a good scholarship opportunity,” Jaworowski said. “That’s a big piece to take into consideration.”

Regardless of their college choice, many seniors have already started working on their applications. For underclassmen who hope to be accepted to elite schools, Baker and Peterson suggest keeping high GPAs, being well-rounded, and taking as many practice ACTs and SATs as possible.

“I would say take a deep breath,” Havener said. “It’s all gonna work out. You may think that there’s only one or two colleges out there for you, but there’s a lot of different choices that are good choices. And in the end, it’s gonna be the college that’s best fit for you and that’s what’s important.”

According to Bielicke, she doesn’t regret pushing herself as much as she did throughout high school. She said that regardless of what happens with Vanderbilt she’s glad she took advantage of learning a lot and working hard. However, her hopes for her dream school are still high.

“[If I got accepted], I would be shocked, definitely relieved because of all the stuff that I’ve done to work up to that,” Bielicke said. “Especially because of how small my chances are, I’m not expecting anything. I’ll just be really excited because I think that I would really enjoy my life there.”