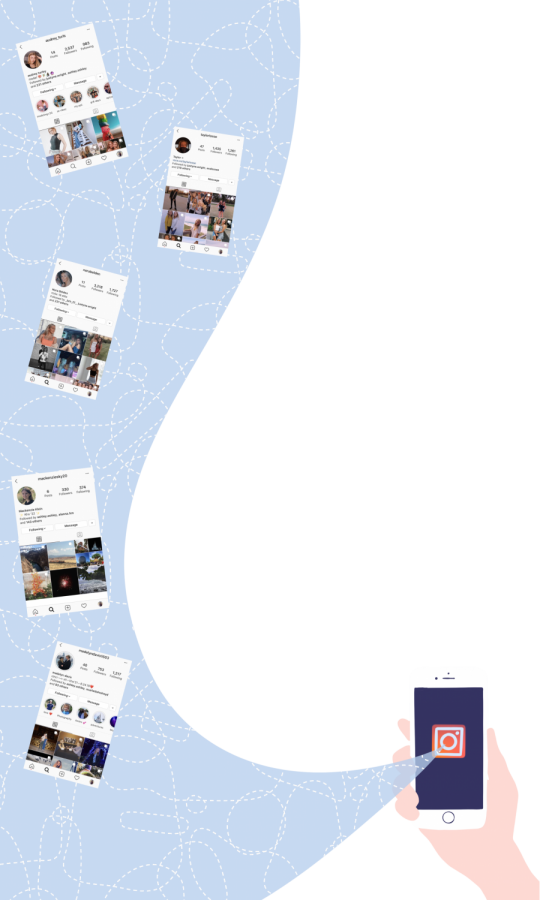 Some KHS students want their Instagram accounts to look perfect.

It’s the weekend. Taylor Losse, junior, is headed to her friend’s farm. While envisioning the flower field she plans to take pictures in, she looks in the mirror and asks herself, “Have I posted in this outfit before?” She double checks her appearance because after adding a VSCO filter, she will post the pictures on her Instagram account.

“Perfection is idolized on Instagram,” Losse said. “You want to get the perfect photo, and you can control what you look like on Instagram, especially with editing.”

Many use apps to edit their face and filters from the popular app VSCO to make their photos look sharper. Losse mentioned why people care so much about their Instagram.

“When you meet someone for the first time, the first thing you’ll do is look at their Instagram,” Losse said. “It’s like a way for people to see you before they meet you. Or get an idea of you, even if it’s not realistic at all.”

Mackenzie Klein, sophomore who rarely posts but still cares about Instagram, said people use popular social media apps like TikTok for posting rapid spams and Snapchat for showing their emotional side because it is temporary. But she said Instagram is about posting “fake” images.

“I follow a lot of people I don’t know well, so whenever I post something I want [them] to be like ‘Oh, look how cool she is,’” Klein said. “Because you don’t want a lot of people, especially those that you are not great friends with, to see the private side of you. You want to put out an image that puts you in the best light.”

Likes, comments and followers on Instagram are all ways for users to see how others accept them. Audrey Turley, freshman who posts modeling pictures, said she used to look at likes as a representation of “coolness.” Losse also said when she was younger she would compare these features with her friends.

“Instagram can really suck you in and make you concerned about how you look to others and others look to you,” Losse said. “It’s basically an app where you compare yourself to others and they compare themselves to you.”

Madelyn Davis also said she would previously compare herself to others on Instagram. Now she said she’s learned to use Instagram positively by writing uplifting captions.

“When I was younger I always obsessed over how many likes I would get on a picture,” Davis said. “But now when I post, that’s not a big deal anymore. It’s more about spreading that positive vibe.”

Forty-one percent (103/254) of KHS students said Instagram sometimes makes them feel negative about themselves. Gina Woodard, health teacher, teaches about these body image comparisons in class by playing a time-lapse video of a model that is Photoshopped until she looks like a different person. She informs her students they shouldn’t look as perfect as the typical Instagram model.

“You’re supposed to have body fat,” Woodard said. “Back in the day, we didn’t know that was something to feel as insecure about as this generation can feel. Which is unfortunate because it can suck a lot of joy and life out of people.”

According to the New York Times, head of Instagram, Adam Mosseri, is considering not displaying likes publicly to help with the comparison issue. But comparisons are not the only issue Woodard said she sees with Instagram. She also said obsessing over Instagram perfection wastes time and promotes self-centered behavior.

“If you spent time focusing on nourishing and caring about yourself, or volunteering and helping somebody else, you would feel so much better and less focused on you,” Woodard said. “There’s some level of focusing on yourself that [is] healthy, but when you spend hours on Instagram that can be detrimental.”

Nora Belden, sophomore with over 3,000 followers, said compliments she gets through comments raise her self-esteem. Davis also said when used positively with encouraging people, Instagram makes her feel better about herself. But she acknowledged there are still times when Instagram can make someone feel bad.

“Social media is responsible for a lot of people’s anxiety because they feel like they have to be this perfect person, ” Davis said. “But if you just be yourself that’s what people like about you.”