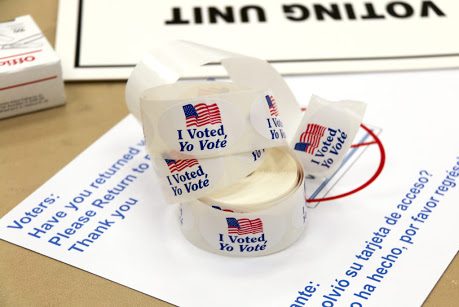 “I voted” stickers in English and Spanish, Virginia, USA, November 2014. (Organization for Security and Co-operation in Europe (OSCE) photo.)

In the eyes of major party supporters, third party candidates are third wheels in American elections: there for the ride but playing almost no role in the elections’ final destinations. Yet Republicans and Democrats alike constantly live in fear of the times when that third wheel begins to steer the outcome. Supporters of William Taft in 1912 knew this phenomenon all too well, when Theodore Roosevelt entered the race with the National Progressive Party, splitting the Republican vote with Taft and allowing Democrat Woodrow Wilson to win the election. Likewise, the names of Ross Perot and Ralph Nader likely still ring in the ears of George Bush voters in 1992 and Al Gore voters in 2000, respectively. In a deeply divided nation, one thing Democrats and Republicans can agree on is those third wheels can sometimes be awfully pesky.

This year, Donald Trump and Joe Biden will be sharing the Missouri ballot with three other presidential candidates: Libertarian Jo Jorgensen, The Constitution Party’s Don Blankenship and Howie Hawkins of the Green Party.

Jorgensen, the Libertarian vice presidential candidate in 1996, will appear on the ballot in all 50 states. She supports smaller government, free trade, fewer immigration restrictions, ending mass incarceration and reopening the economy. The Constitution Party’s candidate, Blankenship is the former CEO of West Virginia coal giant Massey Energy. As the company’s chief executive he was sentenced to a year in prison in 2016 for violating safety standards which resulted in an explosion that killed 29 people. His background has led him to be staunchly opposed to unions and environmental policy. He is also running on reducing the national debt and ending nearly all immigration into the United States. The Green Party’s Howie Hawkins is a co-founder of the party and an environmental activist. As president, Hawkins would support reparations, institute the Green New Deal and work to transition America to a socialist economy.

“I’m going to vote for a third party candidate,” Rowan Burba, senior said. “Howie Hawkins is reliable to be progressive. He was one of the people who helped to found the Green Party. He has been an activist in helping to combat climate change for a while.”

However, based on recent voting patterns, it is unlikely many people will vote like Burba in 2020. Even in 2016, when the Libertarians had a record-breaking year with their candidate Gary Johnson, only about 5% of Americans voted for third party candidates. Some voters, like Jacob Hicks, senior, align with a third party’s views, but would prefer not to vote because of the party’s strategy.

“I agree with the Green Party platform, and I agree with what Howie Hawkins is saying, but I think it’s stupid and naive what the Green Party is doing,” Hicks said. “I don’t want to support the strategy of wasting money on a national election. With the amount of money they’ve raised, they could easily win a governorship, or a local race, or several local races, because there’s just not that much money involved in local races.”

While local elections may indeed be attainable for a third party, election to a state-wide office like a governorship could prove difficult. The 2016 Green Party candidate, Jill Stein, raised just over $11 million for her presidential campaign. In comparison, Republican Josh Hawley had to raise nearly $12 million for his state-wide Senate race in 2018, even though Missouri is predominantly Republican.

Their inferior fundraising power is perhaps third parties’ greatest obstacle to winning. Therefore, many, like Burba, have supported changing the way states hold elections to give third party candidates a better chance.

“My lofty hope is we would do elections and we wouldn’t be voting for the names of candidates or the party,” Burba said. “We would just get a ballot that says each person’s views and policies and voting record. You have no name, no face attached to it, just their policies, beliefs and record. If we could vote based on that, we would end up with a more representative body for what the people actually support.”

Burba also advocates for the abolition of the electoral college, due to its winner-take-all feature. Although this reform has little chance of coming to fruition in the near future, there have been some recent changes to elections that may help the chances of third parties.

Many of the United States’ largest cities like Los Angeles and Chicago have already begun to conduct their elections in a non-partisan manner, whereby political parties play no role. Meanwhile in Maine this year, ranked-choice voting will be in effect for the first time in a presidential election. With this system, voters rank the presidential candidates in order of preference, and if no candidate receives a majority, computers use the voters’ later choices to eliminate candidates and reallocate votes. Additionally, Maine is one of two states not to operate under the winner-take-all system in allocating their electoral votes. This allows third party supporters to rank their candidate first without feeling they have wasted their vote or their vote might spoil the election. According to McReynolds, knowing a third party candidate has the potential to win could influence his vote.

“If I agree with what they’re saying, I’m not opposed to voting for a third party candidate if they have a chance of winning,” McReynolds said.

In this election, however, Missouri will continue operating under the winner-take-all system. Its ballots will still feature the names of political parties beneath the names of the candidates, and voters’ will not be able to rank those candidates in their preferred order. Thus Jorgensen, Blankenship and Hawkins may just be three third wheels in 2020. Still, their voters uphold that those third wheels are integral to our democracy.

“Your vote is your vote, don’t let people talk you out of it,” Burba said. “Vote with your beliefs and we can actually see the change in the country that we want rather than being stuck in an endless cycle of disappointment and pain. We should be excited about the candidates we’re voting for, and excited to support our beliefs, rather than just shaming each other to fall in line. That’s not democracy.”