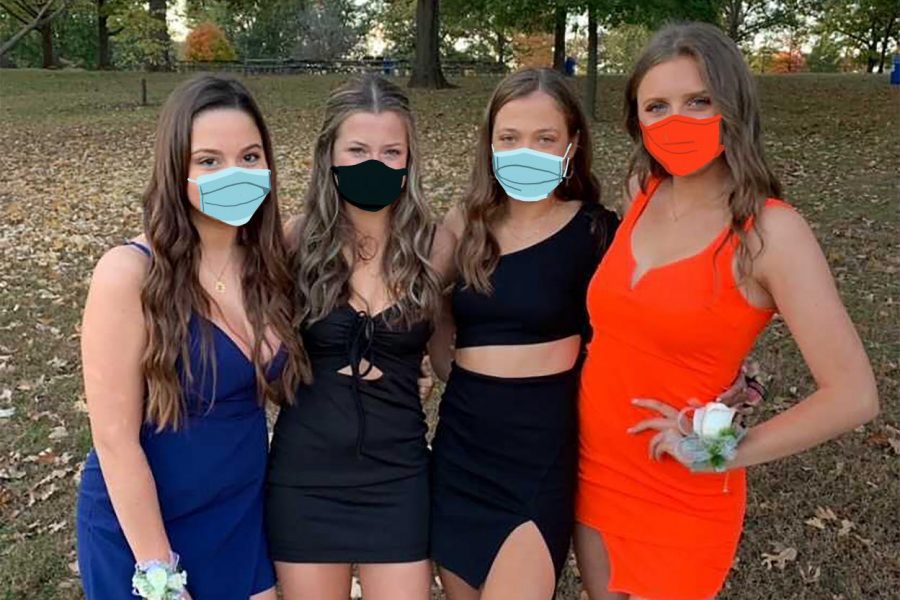 Elise Roettger, senior, will have a "FOCO" with her friends on Nov. 9.

This year homecoming at KHS has a new “F” word. Many students refer to the annual dance between KHS and Webster Groves High School (WGHS) as “Homecoming” or “HOCO,” but it’s officially called the “Friendship Dance.” The dance has another name this year: FOCO (fake HOCO).

On Oct. 6, Dr. Michael Havener, KHS principal, sent an email announcing the cancellation of the Friendship Dance. The dance was originally scheduled for Nov. 7 at KHS, and according to the email, it was cancelled due to COVID-19 restrictions. Elise Roettger, senior, and her friends are having a FOCO.

“Instead of sitting and complaining about it, and focusing on how much [COVID-19] sucks we’re trying to make the most of our opportunities,” Roettger said. “We thought that doing a FOCO would be a perfect way to add fun into this semester and hopefully restore some of the seniority that was lost with COVID-19.”

Roettger said she and her friends will have dates, dress up, take pictures in a park and have dinner together afterwards. She also said they will try to stay outside, wear masks, and be in small groups. Eva Anuhea, senior, is also having a FOCO with her friends.

“Senior year is supposed to be that big year where you can go to sports events,” Anuhea said. “Especially [the] class of ‘21, we got the worst of it because we didn’t have a junior prom. And now we aren’t going to have a senior homecoming. And we probably won’t have a senior prom either.”

Anuhea said she and her friends will get together with a small group or over Zoom. She said she missed the Friendship Dance her junior year, so she is upset that she will not get to attend her last dance.

Roettger said that although she is upset about missing the Friendship Dance, she is more disappointed about not having Turkey Day traditions like hallway decorating and more. As a member of class office, she said she is also disappointed that the whole school has to miss out on a fun year.

“Turkey Day is [upsetting to miss] without the big crowd like we usually have, the tradition of ringing the bell for the seniors, and the pep rally,” Roettger said. “That is the most devastating for me, not being able to experience such a well-known Kirkwood tradition that has gone on for so long.”

Roettger also said she is disappointed about missing the Friendship Dance because it is an essential way to socialize including with WGHS students. The socializing is something she said she has missed during the pandemic.

“This year, especially for me and my friends in the senior class, has shown us that you can’t take anything for granted,” Roettger said. “We went to school on March 13 kind of celebrating that we had an extra week of spring break. I definitely have taken for granted the social aspect of school.”

Seniors are not the only ones having FOCOs. Gabrielle Cannon, sophomore, is also planning to have a FOCO with five of her friends. Although Cannon said she is upset about missing the normal homecoming activities, she pointed out a positive of the situation.

“The most positive thing is that my friends and I [are] wanting to do all the stuff that would normally happen [even though] we can’t do the social events because of the lockdown and because of COVID-19,” Cannon said. “It shows how close I really am with my friends. I’ve moved friend groups a lot, so it’s nice to be able to be with my friends and know that they want to do these things too and it’s not just me.”

Cannon, Anuhea, and Roettger said they plan to celebrate homecoming on Nov. 7, when the Friendship Dance was originally scheduled.  Cannon is thankful for the opportunity.

“If it would be back in March and April I probably would’ve been pretty sour about [homecoming being cancelled],” Cannon said. “But since the time we’ve done online school and been in quarantine, I’ve tried to look on the brighter side of things. I’m just thankful that my parents are letting me get together with a few of my close friends to [have homecoming].”