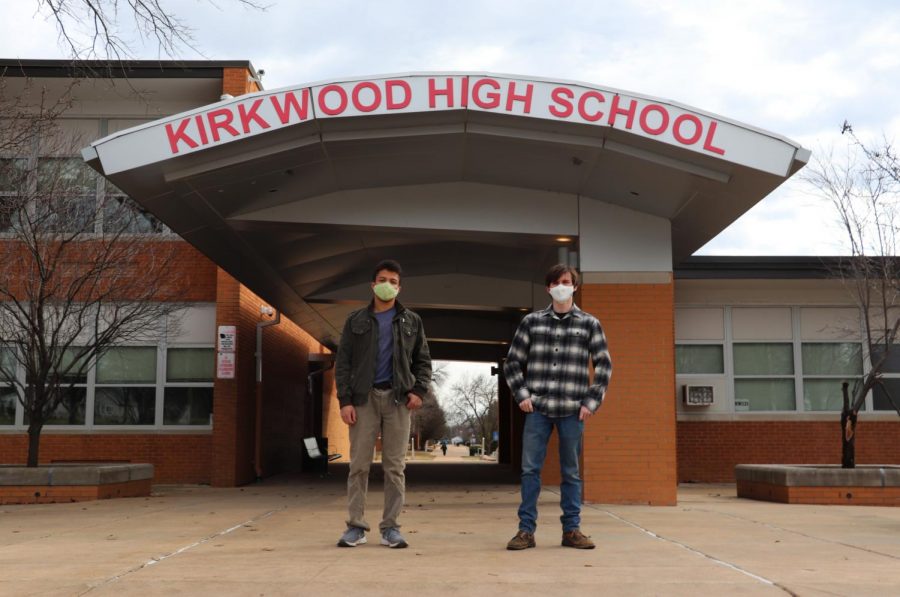 Four days per week, four weeks per month, for three months of training: Seniors Joey Bourke and Toby Munson are taking this time to train for their future professions. Both are participating in training for the Boeing Company in Florissant Valley, MO, about 30 minutes north of Kirkwood, and the seniors stumbled upon the opportunity by happenstance.

“[The advertisement] was on a poster in the metalworking shop,” Bourke said. “Quite frankly, it seemed like the best [career] option out of anything that I had seen, including other colleges that I had been looking at. I can enter the workforce a month after high school with a starting salary of $40,000 per year, and if you work at the company for three years, they’ll fully pay [for you to] go back to school.”

Although the decision to pursue this course was easy for Bourke to make, there was some apprehension from Munson. He was concerned about the impact the commitment would have on other future possibilities.

“I saw the poster in Mr. Bensinger’s room, and that didn’t have me completely sold,” Munson said. “I wasn’t sure if it was what I wanted to do because it was going to be a lot of work. It would require me to go to two schools [at once], basically. But I go, I meet the people there, and they’re all masters of their craft. I learned more [in the first week] than I learned throughout most of my senior year. It just took me a little bit of getting used to it.”

According to Bourke, the course involves such tasks as drilling and riveting, among other undertakings. The training team receives a book full of guides, steps, and other information to ease the students into the material.

“Basically, we take a three month course,” said Bourke. “After the three months, we get an interview with Boeing, and then they hire us, or they do not. The entirety of the last class that took the course got hired, so from what I understand, the interview is more of a formality, but also [is used] to see what kind of person you are.”

Mr. Bensinger, an engineering teacher at KHS, said that several courses similar to this training are offered every year, but few contemplate the offers seriously. He attempts to make all of his students aware of these opportunities so that a good opportunity doesn’t slip past them.

“A lot of times what happens is that our college career counselors receive an email,” Mr. Bensinger said. “They read what the email is about, and then they send it on to the individual teachers that they apply for. This was particularly for people who were wanting to train for the assembly piece, which is like a machinist. Since that applies to the classes that I teach, I received an email. Any time I do, I always look it over. If I think it’s a good opportunity, I always make sure to mention it to my students.”

Both Bourke and Munson remain optimistic about the decision to pursue this over the standard college trajectory that is encouraged at KHS, while blue collar careers are discouraged in today’s social climate, according to Munson.

“I really want to hone this point in — [everyone] should be looking at these types of opportunities,” Munson said.“It’s a lot of work, it’s a lot of commitment, but it pays off if you pass. Even if you fail, you still have a ton of metalworking skills. And if you fail the program, you can [take] it again. You can work [at Boeing] for thirty years and you’ll be set for life if you want to go down that route.”