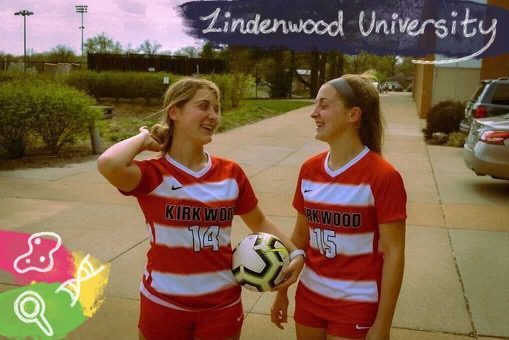 Art by Laurel Seidensticker. They have been playing soccer together since they were 4. Throughout their lives, they have helped each other both on and off the field.

They have been playing soccer together since they were 4. Throughout their lives, they have helped each other both on and off the field. Now, twins Emma and Kamryn Ealey are continuing their soccer journey together at Lindenwood University where they will both major in biological sciences.

The Ealey twins said they both feel strongly connected to one another. Emma said her relationship with Kamryn helps her feel at ease on the field.

“We have a really good bond,” Emma said. “You can definitely see it on the field when we’re playing. [Kamryn] being there makes me feel more comfortable and less nervous.”

The twins are not the only ones who see their strong connection. Rick Ealey, the twins’ dad, said the connection his daughters have gives them an advantage when they are playing.

“There’s a trust factor with [the twins],” Rick said. “Because they have confidence in each other, they’ll trust each other [when they are playing] so they’ll make a quick pass without second guessing it.”

According to Kamryn, soccer has impacted her greatly. She said she has been able to experience several benefits from the sport. When playing, she is able to take a break from stress in other areas of her life.

According to Emma, both have always known they wanted to play collegiate soccer. While they shared this dream, Emma said they had no plans of attending the same school, but were offered similar opportunities at Lindenwood through athletic and academic scholarships.

“We actually didn’t [care about whether or not we went] to the same college,” Emma said. “We both got the same opportunity at [Lindenwood], and we really liked the school and what they had to offer. [It] just worked out.”

While neither of the twins nor Rick had any preference of whether or not they attended the same school, Teresa Ealey, their mom, said she did care. She said she would feel better about them being together in college.

“I did [prefer them to attend the same school], just for the fact it would’ve [put] my mind at ease,” Teresa said. “But it wasn’t set in stone. I would not have been upset had they not.”

In addition to the athletic and academic opportunities the twins received from Lindenwood, Emma said there were other factors that appealed to them. She said the proximity to home and social environment encouraged their commitment to the school.

“[Lindenwood is] close to home so my parents don’t have to travel super far to go see [us] play, or if I want to come home [on] weekends I can,” Emma said. “I also know people that go to Lindenwood, [so] I felt comfortable knowing that there were people there that I knew.”

Lindenwood University is located in St. Charles, about 30 minutes from their home in Kirkwood. Teresa and Rick said they wanted the twins to attend a school no further than a five-hour drive from them so they would be able to attend their games. Teresa said when she found out that both of them would be attending the same school close to home, she was ecstatic.

“[Their proximity is] going to enable us to see them much more than we previously thought,” Teresa said. “I’m excited to see them play at the next level.”

According to Kamryn, she is looking forward to continuing her soccer career with Emma. She said she is excited to experience everything college has to offer with her twin sister by her side.

“I’m excited to build relationships with girls on the team [and experience] college life,” Kamryn said. “Getting to go through the same experiences with [Emma] and just having her there with me is going to be more comfortable for me.”