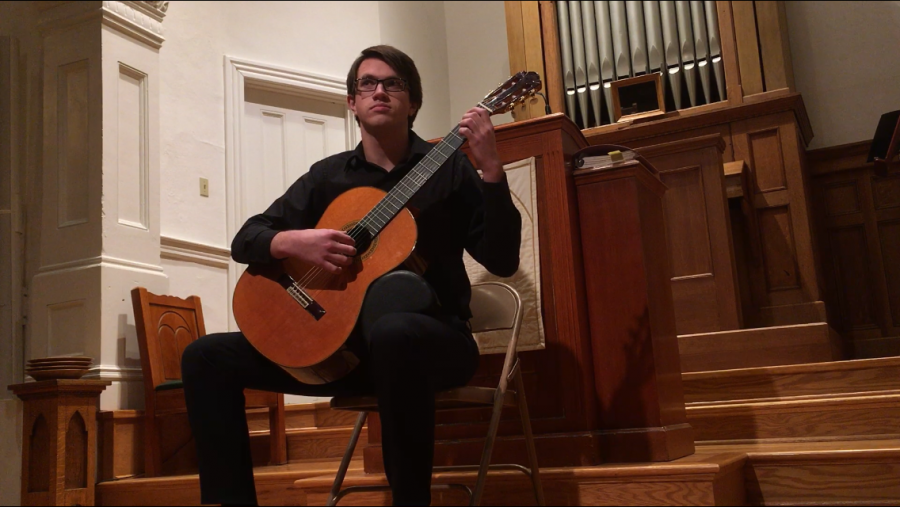 The hands that grasp a pencil while solving a Calculus problem are the same hands that dance across the surface of guitar strings, crafting both an impeccable equation and a musical masterpiece. Mat Coble, senior, skipped from second to fourth grade math in elementary school, allowing him to take AP Calculus BC as a junior, contributing to his perfect score on the ACT. He said his father, Mike Coble, initially sparked his analytical side during his childhood, when he would ask Mat to calculate the tip at a restaurant, pick out the best cereal bargain based on box size or solve puzzles drawn on the corners of church programs.

“You never really hear people say they love math,” Mat said. “But I’ve always enjoyed problem-solving and I like being able to see the whole process ahead of me, like when we find the area under a curve or derivatives in calculus.”

Mat’s parents also immersed him in music at a young age by dropping their first grader off with a guitar at private lessons through the Childbloom Guitar Program. To participate in the KHS band program, Mat picked up the bassoon and spent the 2017 marching season as the saxophone section leader. This year, Mat has played with about nine other guitarists in competing ensembles and spent five months preparing for his senior recital on Feb. 24, which was an hour-long solo performance for his friends, family and teachers. In the audience Mat’s father, said he watched his son on stage with a strong sense of pride for his accomplishments.

“He has always been very good at guitar technically, but in the last few years I’ve observed him grow in expressiveness and musicality,” Mike said. “In his college essays, he wrote about how he’s not generally emotive in normal life. But with a guitar, he lets the emotions come through the music.”

In all facets of his life, Mat has never been known to quit. He never abandoned his passion for math, gave up his drive to succeed in music or separated from his best friend, Osman Noueiry, senior.

“The thing most people know about Mat is how smart he is, but they’re only scratching the surface,” Noueiry said. “I love his dry sense of humor and he always has something hilarious to say. We’ve had lots of other friends, but Mat and I have always stayed together.”

When planning for college, Mat said he only wanted to apply to schools with a guitar ensemble and a strong math program. While he is still undecided, he is certain that he will double major in his lifelong passions.

“Every time I go to a college interview, they ask me how I’ve connected math and music, and I always tell them that I haven’t,” Mat said. “They’ve always been completely separate parts of my life, but I’ve loved the process of pursuing both.”