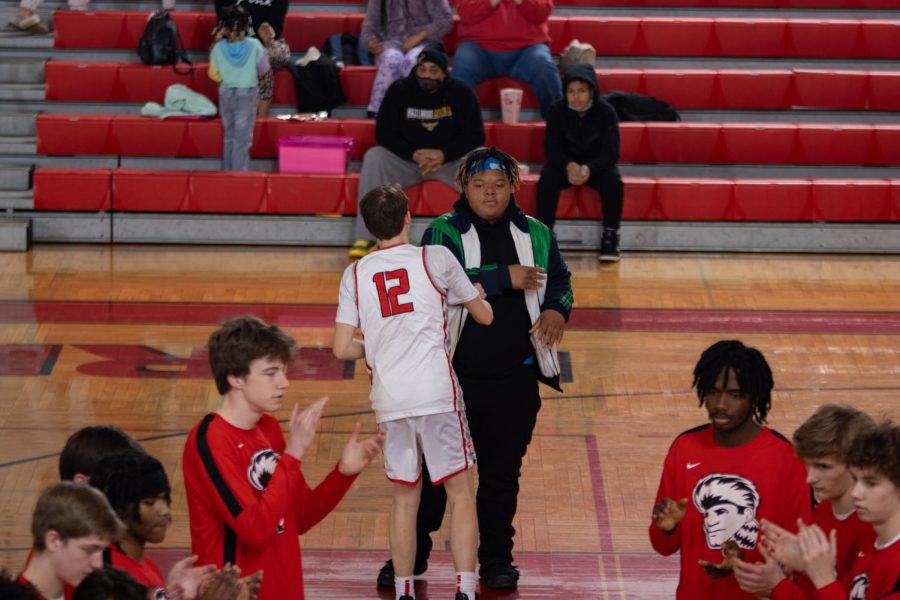 His friends on the team know him as “Big Mike.” He does the behind the scenes work along with cheering on the athletes and most importantly, filming.

Rolling up in his notorious white Chrysler sedan with his music bumping, Mike Wallace, senior, is hard to miss. Wallace is manager on the KHS varsity boys basketball team. His friends on the team know him as “Big Mike.” He does the behind the scenes work along with cheering on the athletes and most importantly, filming.

“My brother was playing for a nationally-ranked football team and his coach asked me to record a game,” Wallace said. “He liked how I did it and then he started paying me to do all of the games, play-by-play.”

Wallace films for teams of all ages throughout St. Louis, mainly running his business through his Instagram account, @masterstatustv. He goes live on his social media, not only to get film for the teams, but also for fans to watch the game online.

“[Mike’s filming] helps [get] outside people to join us,” Jimmy McKinney, KHS varsity boys basketball coach, said. “It gets our kids out on social media [so] college coaches [can] see them. It is a really big thing that he is doing for us. Mike is everything. He’s the backbone of Kirkwood basketball.”

Christian Hughes, junior on the KHS varsity boys basketball team, said although Wallace is not playing on the court with them during games, he is still an essential part of the team. Hughes said Wallace hangs out with the team and is always there with them at practices and games.

“He gives you a reason to come to practice,” Hughes said. “He’s a relatable person who doesn’t play basketball [and] contributes a friendship. He’s fun to have around.”

Wallace said one of his favorite parts about filming is getting to build relationships with the team. He hopes to continue creating and making connections with the athletes even after graduating from KHS. Wallace said he plans on going straight into his videography business full-time as soon as he graduates high school.

“Being a cameraman, you get more access,” Wallace said. “Instead of just coming to the game like a regular person and sitting in the stands, I get to be on the field. I’m down there with the players. It makes it more fun.”