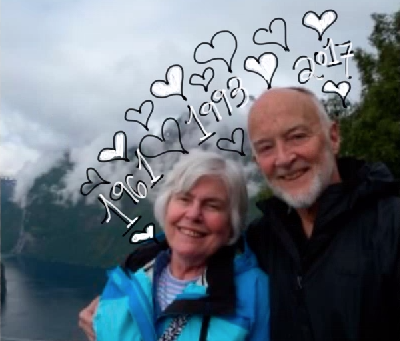 Where are they now: Mike McGill

1961 KHS Graduate, Mike McGill, did not have a set plan. After KHS, McGill set out to learn, not just to get his education, but to find what he wanted to do with his life. McGill was unaware of the influential path his life would take before his retirement in Virginia.

McGill knew for a start that he wanted to get a college education, and decided to major in business and continue exploring his options. He attended Northwestern University for one year before transferring to the University of Kansas.

“When I went to college I wasn’t exactly sure what I wanted to do,” McGill said. “I had an ulterior motive for majoring in business. At the University of Kansas, I could avoid taking a foreign language and take a minimum amount of courses in math and science. I had the maximum flexibility to take the courses I liked.”

McGill said early in his life he focused on educating himself on anything he found interesting until he found what he wanted to do. McGill’s exploration of political science prompted him to attend The University of Texas on a university fellowship, a merit-based award which supports a student’s education, after receiving his bachelor’s degree in business. McGill ended up earning a master’s degree in political science.

“When I was growing up, I was always intimidated by the examples of  [men] who would say things like ‘I knew from the time I was a teenager what I wanted to do and I did it,” McGill said. “I [told] myself that as I go through life and look at job opportunities I’m going to apply four criteria: Is it located in an interesting place? Is there a component of social responsibility to the work? Is it intellectually stimulating? and does it pay a reasonable amount of money?”

After college, McGill worked as a foreign service officer, but two years into the job he said it was not as interesting as he had thought it would be. He sought out a new job and began working for Marshall Kaplan, Gans & Kahn, an urban planning and consulting firm.

“I discovered, to my delight, how exciting and stimulating urban policy and urban problem solving could be,” McGill said. “So essentially for the rest of my life, in one way or another, I worked on advocating solutions for urban problems.”

Kerry McGill, Mike ’s brother, said even as Mike worked in San Francisco for San Francisco Planning and Urban Research Association, a non-profit citizen-business coalition, he never truly stopped his education. Jeff Parsonage, KHS classmate and friend of McGill said McGill’s drive and determination for learning throughout his career is his most admirable quality.

“He would ride the bus to work every day and the people on the bus would refer to him as ‘the man with the big book’.” Kerry McGill said. “He always had some sort of biography, history or non-fiction book he was reading.”

Although McGill hasn’t lived in Kirkwood since graduating from KHS, he still managed to make it to the 30-year reunion in 1991 where he was reintroduced to Mary Marsalek, his high school sweetheart.

“Both of our marriages [at the time] were coming to an end,” McGill said. “We clicked again, and we got married in 1993.”

“[Growing up] Mike lived in the house in the middle of the cul-de-sac,” Parsonage said. “The house that Mike and Mary [later] bought is very much like the house in that neighborhood two blocks south of [KHS]. What strikes me about life and people’s behavior is that everybody goes home in a sense.”

Where are they now: Mike McGill