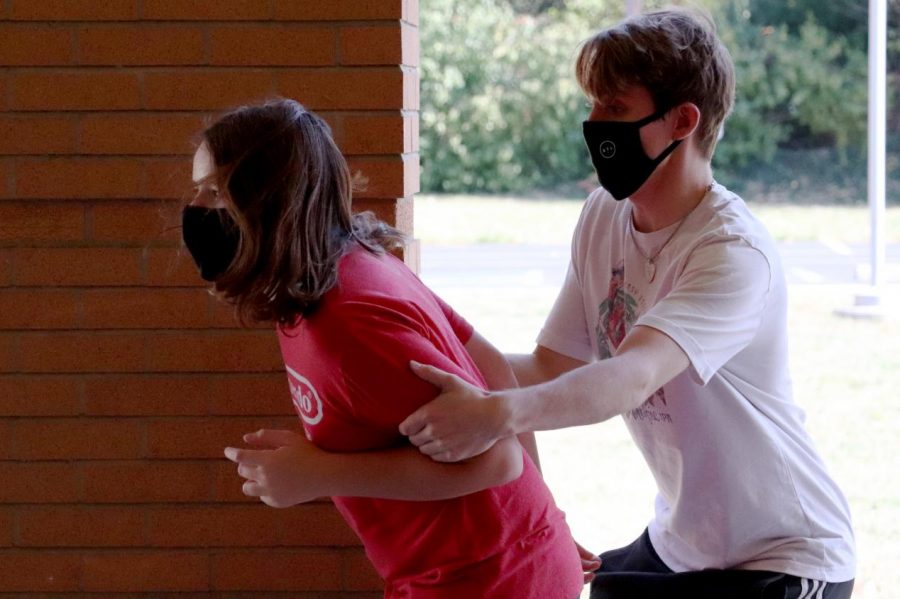 Xander Piskulic, senior, holds back Cooper Menne, sophomore, in a scene at a cast rehearsal outside KHS.

If you’ve strolled past the amphitheater at Kirkwood Park lately, you may have noticed a group of students running across the stage while screeching human-generated bird calls. This is the KH Players drama department in rehearsal. With transparent masks, artificial feathers and a script featuring Greek gods, real-estate agents and talking birds, the cast and crew of “The Birds: A Modern Adaptation” will soon soar into opening night.

“The Birds: A Modern Adaptation” is a revamped version of “The Birds” originally written by Greek playwright Aristophanes. The story follows two men who, fed up with their petty lives in Athens, travel to a kingdom of talking birds with hopes of a better life. Once there, they make a plan to use the birds to destroy the power of the gods, then overthrow the bird kingdom in order to achieve ultimate power over the universe. According to Gigi Feltmann, junior and cast member, the play is as ridiculous as it sounds.

“[The play is] a comedy, so it’s stupid and over the top,” Feltmann said. “Hopefully the audience will find it amusing, because we’re not [dressing up as birds] to not be funny.”

As well as the actors, the production’s crew plays a crucial role in making the story come to life. Sound and light technologies will be adapted to the outdoor environment, and after the set is built at KHS, it will be transported to the amphitheater stage. In addition to this, the costume crew is responsible for transforming the actors into talking birds.

“We weren’t too focused on making the actors look exactly like their birds, because we know the audience knows what they are,” Natalie Kaufmann, junior and costume crew member said. “The costumes match the color of the birds, and their headpieces have feathers that reflect which bird they are, but we were trying to resemble Greek mythology while also incorporating modern themes. It’s really complicated overall.”

During cast rehearsals and crew meetings, participants are required to wear a mask, practice social distancing and complete a temperature screening upon entry. The KH Players fall play would normally be on the Keating Theatre stage at KHS, but due to COVID-19 restrictions, the production will be at the Lions Outdoor Amphitheater at Kirkwood Park. The show will be performed live on Oct. 29 and 30 at 6:30 PM. For these performances, while actors will wear clear masks that allow a better view of their facial expressions, audiences of up to 150 people will be required to wear masks and maintain social distance. A recorded version will also be streamed on Nov. 6 at 6:30 PM. All ticket information can be found here for the live performances or here for the virtual performance.

“Overall, it’s been completely different [from every other production I’ve done at KHS] because of corona,” Jess Cohen, senior and cast member said. “But even so, I love getting out of my house and being able to see people every day. It brings a sense of normalcy that we really need right now.”