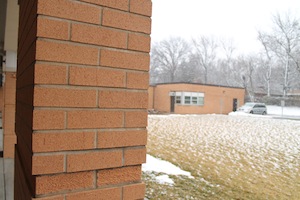 Kirkwood High School has had two lockdowns this year, one resulting from a light bulb incident and another by a ksdk reporter

For information about the events discussed in this article, see “KHS goes on lockdown.”

I have a shocking confession. I kind of agreed with Kanye West when he said Beyoncé deserved the Best Female Video award at the 2009 MTV Music Video Awards. Taylor Swift’s “You Belong With Me” was good, but not nearly on the same level as the iconic “Single Ladies” music video. Even though I agreed with what he was trying to get across, he ruined any chance I would side with him when he stole the microphone from Taylor Swift before she accepted her award and said she did not deserve it. “Imma let you finish, but…”

As I watched the beginning of KSDK NewsChannel 5’s 10 p.m. broadcast Thursday, I felt like I was rewatching the Kanye-Swift catastrophe. “We have heard you [Kirkwood community members], and we are sorry,” the reporter said, before an extended clip demonstrating everything wrong with KHS’s security. KSDK’s sorry if you’re offended, but here’s evidence that they are right and you are wrong. “Imma let you finish, but…”

The problem with undercover reporting

“Where did we go wrong?” KSDK must be asking themselves. Doesn’t the Kirkwood community understand the importance of the message? Don’t they understand we’re trying to save lives? We’re just doing our jobs.

And from their perspective, they certainly were, but from an outside perspective, it’s clear that they were only interested in making the story more intriguing. According to the Society for Professional Journalist’s (SPJ) Code of Ethics, journalists should “avoid undercover or other surreptitious methods of gathering information except when traditional open methods will not yield information vital to the public. Use of such methods should be explained as part of the story.”

KSDK could have easily avoided undercover methods. They just used the footage of the reporter walking into the school with a hidden camera. He could have walked to the office and identified himself as a reporter, avoiding the ensuing lockdown, and still acquired the crucial footage that showed KHS’s security isn’t up to scratch. The result of KSDK’s choice to use undercover methods exemplifies why those methods are discouraged in the SPJ’s code.

According to CNN, there were 25 school shootings in 2013. The Daily Beast reports that over the course of the year after 20 first graders were shot and killed at Sandy Hook Elementary, school shootings took place in the U.S. every two weeks on average. Just three days ago, a widely-covered school shooting occurred in Roswell, New Mexico. In today’s charged atmosphere surrounding school shootings, and the greater likelihood that one will occur, the result of KSDK’s decision to go undercover- the lockdown- triggered even more panic and fear than it may have several years ago.

Although I personally wasn’t rattled by the lockdown, my mom was. She texted me soon after the event, asking if everything was alright, rattled by the mandatory call to parents by the school during a lockdown.The St. Louis Post-Dispatch reported that Stacey Woodruff, KHS parent, said she wept when she received the call, and talked to her daughter over her cell phone throughout the lockdown. Caroline Goff, freshman, told the Post-Dispatch that students in her class “were scared that something was going to happen to [them], like at Sandy Hook.” KSDK’s apology failed to address the emotional impact such a terrifying experience can have on a community. I only hope they addressed as a staff the potentially devastating effects of undercover reporting.

Journalists face a blurry line between great reporting and inappropriate conduct. What’s OK and what isn’t OK? The simulation was OK. Walking into the building was OK. Asking to interview a security officer was OK. Seeing if someone would guide a visitor to the building to a bathroom was OK. Pretending to go to the bathroom and wandering around the school instead was not OK.

An absent perspective
As KSDK smudged KHS’s reputation, they did not think to include KHS’s admirable recent response to a potentially dangerous intruder in the building. They did not think to add that KHS has attempted to implement an updated security plan this year. They did not think to mention that walking counselors guard most entrances and walk the hallways, specifically watching for intruders. KSDK chose to withhold information that pertained to the story to try not to look bad, and it only made them look worse. They tried to enhance the important angle they had– that KHS’s security needs work– by leaving out what KHS’s security is doing right, and it only deafened the ears of the people who need to hear the message most.

I have never, not once during my four years at KHS, felt unsafe. Based on the explosion on my Twitter feed after the KSDK broadcast, a great deal of KHS students agree. The fact that KSDK chose to omit this perspective entirely, to not even interview students about how safe they felt at KHS, is why so many people are so angry. They are angry, irritated and resentful because they know KSDK didn’t tell the whole story. They know about the walking counselors, the new security measures this year and the amazing recent KHS response to an intruder false alarm. Kirkwood lost all respect for the messenger, and KSDK’s goal– to communicate a crucial message– was lost as well. The other side of the issue was not represented, and the horrible result just demonstrates why covering every side of an issue has been pounded into my head since I took Journalism I as a freshman.

So yes, in the end, I find it as hard to agree with KSDK as it was for me to agree with Kanye West’s rude interruption at the 2009 MTV Music Awards. Maybe next time KSDK decides to cover something this important, they’ll ensure the people the story impacts the most aren’t too offended to listen.