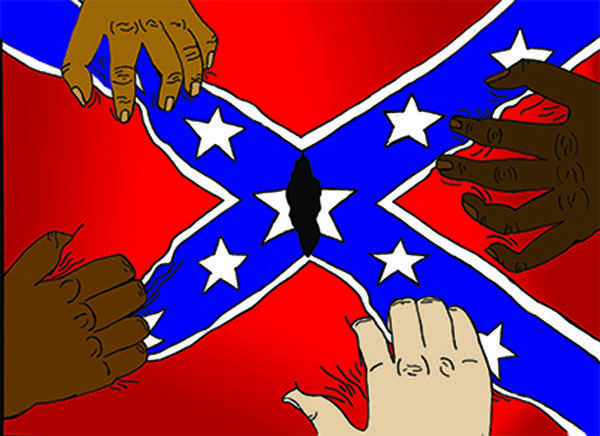 Death.These are the words I associate with the Confederate flag. A flag is meant to symbolize a greater meaning; a country, a belief, a celebration. I can’t help but wonder, who would be proud to fly a symbol of such atrocities? With our country’s history of oppression, what good would come from raising a symbol of hate? The fact it took this long to do away with a symbol that represents racist sentiments dating back to the 1800s is what makes me question the progress we have made since then.

When I first heard of the Confederate flag controversy in South Carolina, I was shocked Confederate flags were still flying, especially over government buildings. What’s even worse is that nine innocent people were killed June 17 at the hands of a hate crime at the Emanuel African Methodist Church in South Carolina which created the uproar over the Confederate flag flying above the Statehouse. It took death to open peoples’ eyes to the hate still rampant in society. The same crimes that were committed during the Civil War against Blacks occurred again in 2015, and this crime caused the removal of a flag that should have been taken down decades before.

The Confederate flag did, however hateful it may be, symbolize the ability of the common people to rise up and challenge the government. It’s a symbol of free speech and the right to assemble. However, the rebels took advantage of this right to support a system that directly contradicts the liberty of America and the sentiment that all men are created equal.

The people who fly the Confederate flag also argue it represents “Southern Heritage” and the men who died fighting for what they believed. Rebel sympathizers should not be proud of what their ancestors caused. Those men died to keep others in shackles. The belief in “Southern Heritage” doesn’t excuse the racism and hatred, the driving forces of the Civil War.

Both the House and the Senate in South Carolina voted the week of July 6 to take the flag down from the Statehouse and the action was made concrete on July 10 when the flag was finally lowered. Fortunately, the flag was lowered, but it doesn’t erase the bitter taste in my mouth.

The Confederate flag was, and forever will be, a symbol of racism and division.