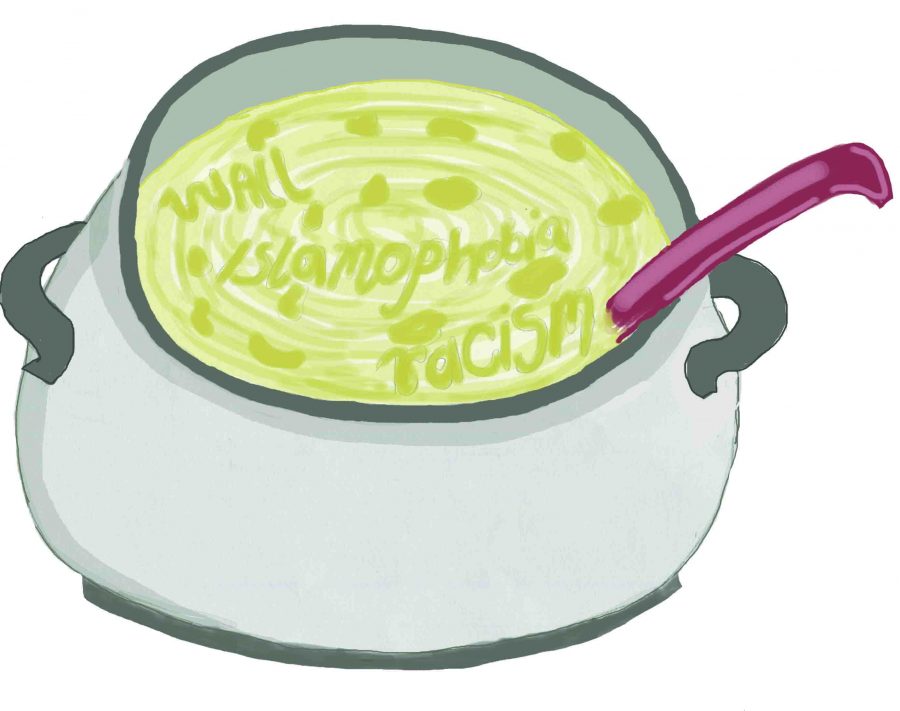 The first thing I learned about immigration was in the song “Great American Melting Pot” by Schoolhouse Rock. I learned America doesn’t have just one race. Almost everyone’s family started somewhere else and immigrated to the United States in search of new opportunities. The lyrics taught me to not judge others by what they look like or where they came from. However, today, immigration is a different story. The inspiring tales about men and women from Europe who traveled to Ellis Island with nothing but $50 in their pocket are long behind us. Today, the once great American melting pot is not so great.

Islamophobia, the prejudice and fear of Islam, is partially to blame for this. According to The Guardian, 62 percent of white Americans have an unfavorable opinion on Muslim Americans. This discrimination causes hate and bigotry among Americans. And with this election it doesn’t look like it’s going to stop anytime soon. Back in December of last year, Donald Trump proposed the temporary ban of all Muslim travel to the U.S. Experts declared this notion unconstitutional and Trump later lightened up on his immigration reform by focusing more on deporting criminals instead of separating illegal immigrants who have been here for years, yet this, the idea of blaming troubles on a religion is absurd and frankly xenophobic.

It’s not just men and women from the Middle East who are being targeted, it’s also Mexicans and Central Americans who are facing the consequences of new immigration reform. With 37 percent of all immigrants coming from these areas, according to Migration Policy, it’s seen as one of the major focus points to keep immigrants out due to negative stereotypes. Yet according to research done by the Annals of the American Academy of Political and Social Science, immigrants have helped economic revitalization and reduced the amount of poverty in large cities.

In fact, America is not worse off economically nor are the streets less safe because of immigration. The regions where immigrants have settled in the past two decades have decreased in crime, grown larger and rebuilt previously poor neighborhoods. It cannot be said for sure immigrants are the reason for this positivity, however, it shows they are often not the causes of transgression. Yet according to the last U.S. census a majority of Americans look negatively upon immigrants. Pew Hispanic reports that when asked what one word comes to mind when hearing the word “immigrant,” 12 percent of U.S. adults think of “illegal.” And that’s a problem.

Immigrants aren’t trying to sneak in and steal jobs or commit crimes. They are trying to start a new life in a land of new opportunities. Sure, there are people accepting of new cultures and ethnicities, but with a presidential nominee who has referred to all Mexican immigrants as “rapists,” we still have some work to do. Because until the lyrics “It doesn’t matter what your skin. It doesn’t matter where you’re from, or your religion, you jump right in.” from “Great American Melting Pot” are true, immigrant discrimination will still be a problem.