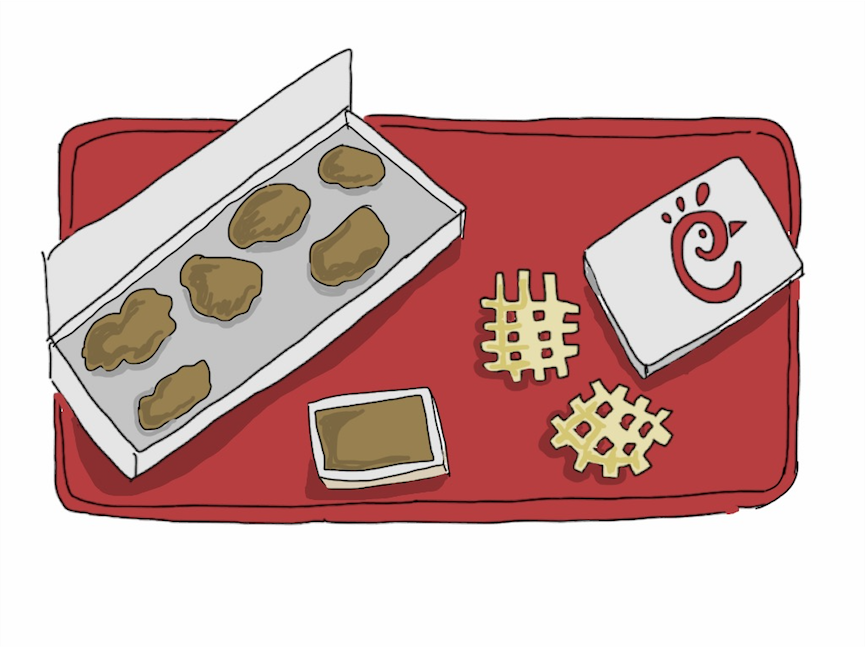 It’s noon and your stomach has been growling for the past hour, begging for a bite of food. All your brain can think about is devouring a dozen delicious chicken nuggets dipped in Chick-fil-A’s heavenly honey mustard sauce, with a side of the crispiest waffle fries you’ve ever munched on. If you’re really feeling it, then perhaps you’ll decide to top it off with a freshly squeezed lemonade or a rich cookies ‘n cream milkshake.

Too bad you can’t get a meal that amazing at Raising Cane’s.

Not only has Chick-fil-A been kicking Raising Cane’s to the curb since day one with their quality of chicken, but it has been offering a superb selection of sauces, dessert, and customer care. Since both restaurants are chicken based fast food chains, rivalry is always on the rise.

Along with quality, Chick-fil-A proves to dominate the chicken industry with their variety. Raising Cane’s lacks diversity in food while Chick-fil-A chooses to display and serve their chicken options in unique ways appeals more to consumers. Consistently cooking their meat to perfection with no trace of a burnt aftertaste is an absolute must for meat lovers. Whether it be grilled or fried, it’ll hit your sweet spot just right.

According to Chick-fil-A enthusiast, Gracie Avery, sophomore, Raising Cane’s’ options are a complete joke compared to Chick-fil-A’s multitude of eats.

“What’s not to love?” Avery said. “From a kid’s menu to a breakfast one, all the way to entrees and desserts, they’ve got you covered.”

Raising Cane’s is notorious for food failure on their menu. As if having to eat mediocre meat isn’t bad enough, you’re left with no other options besides their single watery and flavorless sauce that’s been put on a pedestal. Packing an assortment of foods that’ll blend beautifully with any meal is the key to making tastebuds tingle. Chick-fil-A’s scrumptious condiments include Polynesian, zesty buffalo, and of course, Chick-fil-A’s famous house sauce. Not to burst your bubble Raising Cane’s, but Chick-fil-A has the same number of sauces as you do entrees.

But that’s none of my business.

Now, correct me if I’m wrong, but shouldn’t a restaurant that specializes in chicken provide some premium poultry here and there? Anna Smith, sophomore, believes it should in fact have meat that stands out instead of bland breading that falls off instantly when touched.

“There’s zero flavor to their food items,” Smith says. “The dullness in the sauce is ridiculous compared to Chick-fil-A’s.”

What is ridiculous though is how impeccable Chick-fil-A’s customer service is. Being greeted with a warm welcome every time upon entering the restaurant allows for instant satisfaction. The level of kindness an employee will rise to in order brighten a person’s day never ceases to amaze. What kindness you may ask? Voluntarily refilling your drink, never having your order messed up and taking your trays for you. Their classic ‘my pleasure,’ always added with a with a smile makes for one unforgettable experience.

“Chick-fil-A stands out because they genuinely care about their customers,” Asha Zein, junior said. “Most restaurants typically just want your money.”

Needless to say, Chick-fil-A is nothing short of superior among its competitors. Achieving excellence in each of the essential categories while somehow surpassing the human interaction aspect is no easy task. However, Chick-fil-A manages to succeed every time. Not all fast food industries are this top-notch, which is why Chick-fil-A will always provide you with any mouth watering meal your heart desires most.

While cruising down Manchester Road, you and your friends begin to mistake the rumbling of your stomachs for the sound of distant thunder. As teenagers, you need something that requires little to no effort to get: fast food. You sift through a mental slideshow of nearby drive-thrus and settle on two popular chicken chains within a mile of each other. As you call out to the group, “Cane’s or Chick-Fil-A?” what you are really saying is “Would you prefer a heavenly, mouth-watering meal hand-crafted by Jesus himself, or a mediocre hunk of misery between two soggy pieces of bread?”

Louis Garr, sophomore, firmly believes that Cane’s is the best choice. Garr visited Cane’s almost every other Friday in middle school, and by the end of the year, the employees knew him by name.

“It’s not even close in my opinion,” said Garr. “Cane’s is more authentic. [The chicken] is more crispy, tender and juicy. How it tastes with the sauce in your mouth is just superb.”

Sandelman, a food service consumer research firm, rated Cane’s as the best quick service restaurant chain in America every year from 2007-2012. Cane’s earned the number one spot in the following categories: taste or flavor of food, quality of ingredients, temperature of food, accuracy in filling orders and the highest quality chicken chain. Chick-Fil-A has a greater variety of entrees, but focusing efforts into only chicken fingers, texas toast, crinkle fries, coleslaw and secret-recipe sauce allows Cane’s to produce higher quality products, superior to anything endorsed by some illiterate cows. The fresh, tender chicken fingers and other essential elements of the meal work together in beautiful harmony.

The final shimmering gem of Cane’s is their signature secret sauce. Keyon Eversgerd, junior, has worked at Cane’s for almost a month and confirms the sauce is just as fresh as it claims to be.

“I’ve only made it once,” said Eversgerd. “But I know that we mix it fresh every morning until it tastes perfect.”

The ingredients of the sauce aren’t open to the public, which only adds to the rarity of this delectable condiment. Pre-packaged Chick-Fil-A sauce is loaded with preservatives, proving to be as fake and unauthentic as the phrase “my pleasure”.

One step into any Cane’s location is a step into a familiar, home-like environment unlike most fast-food chains. Polly Rekittke, junior, finds that posters from the 1980s and framed pictures of dogs lining the walls only strengthen the restaurant’s fun, approachable vibe.

“Everyone working [at Cane’s] is so friendly and welcoming,” Rekittke said. “It’s my favorite part about going there.”

When asked to pick between Cane’s and Chick-Fil-A, 64 percent of the KHS graduating class of 2017 voted for Chick-Fil-A. They left Kirkwood without truly appreciating the underrated glory of Cane’s, but it’s not too late for you. Between the nationally acclaimed chicken quality, irresistible side options, a top-notch condiment recipe and calming ambiance, there’s no way to go wrong. Of course there is always one advantage Cane’s will have over Chick-Fil-A, one critical asset that will never fail: Sunday.