Is breakfast truly the most important meal of the day? (Tatum Shore-Fitzgerald)

Is breakfast truly the most important meal of the day?

Should we eat breakfast?

We can all agree that food is fuel. But depending on how much of a foodie you may or may not be, your primary source of fiber won’t always come from the “most important meal of the day.” Read this yes-no column to decide whether breakfast is necessary.

You wake up. With a sigh of relief you realize it’s the weekend, you don’t have to rush to get ready for school. After laying in bed for an hour watching “Friends” on Netflix (for the millionth time), you begin to smell the sweet, sizzling scent of bacon coming from your kitchen downstairs. Eager to fill the empty void in your stomach, you rush down the stairs to see a buffet of eggs, bacon, fruit and juice all ready for your morning feast. If this isn’t an ideal weekend morning, we seriously need to talk. Breakfast is, without a doubt, the best meal of the day. Whether it’s The Shack, First Watch, Denny’s, or simply your kitchen, what’s on the menu for breakfast will always top lunch or dinner.

We all grow up eating breakfast, but at some point in our busy, chaotic teenage lives some people begin to see breakfast as unnecessary. A recent NPD survey on the effects of breakfast showed that nearly 31 million Americans do not eat breakfast. This means there are nearly 31 million people in this great country are being deprived of the most flavorful meal of the day.  It would not be a stretch for me to say I pity those who skip breakfast.

Although I understand that breakfast is the easiest meal to skip (shoutout to everyone who sleeps past noon), starting the day with no calories to burn simply doesn’t prepare you for whatever it has in store. I’m tired of hearing the excuse of not having time for breakfast. By eating a complete meal in the morning, you are giving your body protein and nutrients you can thrive on, and providing your taste buds with true euphoria.

Sharon Collisson, University of Delaware dietary nutritionist, encourages all people to eat a balanced breakfast every day. She said in an interview with Time Magazine, “People who consume breakfast regularly often have increased physical activity. They have better dietary profiles and lower intake of snacks.” Although no study has proven the urban legend that eating breakfast leads to weight-loss, it does promote a healthier lifestyle.

Putting aside the benefits of eating breakfast, one thing stays true: breakfast food is delicious. I don’t mean just the basic combo of eggs, bacon and sausage–I’m talking about the various creations you can make with the ingredients breakfast food. Avocado toast, yogurt parfaits, breakfast burritos- the options are truly limitless. Although not all breakfast foods are healthy, treating yourself to a short stack with a side of bacon every once in a while is nothing to be ashamed about. Breakfast is breakfast, and it is truly a gift.

Come to think of it, this morning meal is the only meal that receives any hate from our society. Have you ever heard the words “I hate dinner” or “I’m just not a big lunch person,” come out of any of your friend’s mouths? Probably not, and I’m here to say the hate needs to stop.

From bringing people together over coffee cups and stacks of pancakes to giving athletes and workers a kick start bright and early in the day, breakfast is truly the most important meal of the day. 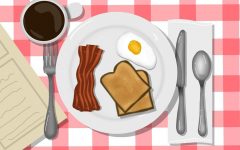 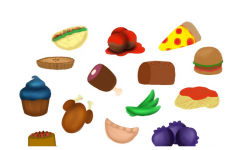 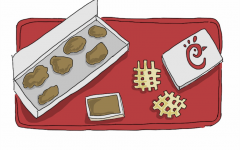 It’s a text from my dad. The last way I’d like to spend a Sunday morning is by getting dragged out of bed for the “most important meal of the day.” But do I have the heart to tell him? Absolutely not. He’s just a simple, sweet Midwesterner who has a fondness for food like any other. Instead, I force a smile on my face, suffer a 45-minute wait and endure the nauseating aroma of steak and eggs.

No pun intended, but I’m fed up with the hype over breakfast.

Unlike the majority of people my age, I am among the 20-30% of adolescents who choose not to eat breakfast, according to the American Academy of Pediatrics. I opt for an alternative called intermittent fasting: a dietary process that cycles between periods of fasting and periods of unrestricted eating. Supported by one study found from Harvard’s School of Public Health, it decreases not only body fat, but high blood pressure and cholesterol.

Truth be told, none of this appreciation makes sense. Call me crazy, but never once has something as absurd as breakfast in bed crossed my mind as appealing. People act as if eating in their pajamas makes them royalty. News flash: you’re no princess, just a fool. Dear God, the thought of spilling chocolate milk on my sheets while trying to finagle the remnants of an omelette makes my skin crawl. Surely, the wafting trace of sautéed onions belongs in a kitchen, not in my bedroom.

What else boggles my mind? Eggs. Hard-boiled, over-easy, scrambled, poached, basted, it doesn’t matter — each form fills me with disgust. You name it, I hate it. Perhaps it’s their brain-like texture or the way a relative tries to pass off deviled eggs at a family gathering as if they don’t have the word “devil” in them for a reason. Who else would be behind a stench so foul other than the infamous Lucifer himself ? Once and for all, let’s stop putting eggs on a pedestal as if they’re some end-all-be-all and classify them as what they are: crap.

Next, let me tell you how much of a stickler my family is in regards to your first meal of the day containing variety. Of course, I know by now that I need my fiber, carbohydrates, proteins, fruits and veggies, Mom. I just don’t exactly have time to dilly-dally during a grand breakfast every morning before school. Nonetheless, my mom is also a firm believer in putting something in your stomach as opposed to nothing, no matter what. However, last time I checked, she hasn’t seen my friends scarf down a stack of blueberry flapjacks from iHop or slurp a Venti Iced Vanilla Latte from Starbucks within seconds. Yeah, not exactly what I would deem as heart-healthy either. The fact of the matter is that you should consume 2,000 calories in one day — via Dietary Guidelines for Americans — not in one sweetened or salted sitting.

As ironic as it is, I work at a brunch cafe. By no means am I here to dismiss the food industry, rather my aim is to touch on the culture of breakfast itself. On one hand, it makes my day when two elderly ladies catch up on each other’s lives over a Cup of Joe or when a weekend regular sits down for an order of our Lox Avocado Toast. On the other hand, I wouldn’t mind not having to scrape off cold mounds of half-eaten fried chicken livers into the trash or deal with the hangriness of entitled customers. A personal favorite of mine is when I overhear post-brekkie conversations about how one is going to “destroy the porcelain” after shoveling down biscuits and gravy. Even Aunt Jemima wouldn’t be too pleased with that potty mouth.

Finally, for those of you thinking, “We get it, this chick hates breakfast,” there are in fact exceptions to when I will eat it. Before standardized testing, I stay on the lighter side by consuming foods such as yogurt, nuts, a scoop of peanut butter and sometimes toast with jam. While I would much rather munch closer to lunch, research from the Developing Human Brain points toward a correlation between eating and higher test scores. Then again, I won’t go out of my way to chit-chat al fresco and see no reason as to why someone should drop a Benjamin on breakfast food when they can instead save their hard-earned money for a superior meal.

So the next time your waitress asks, “Links or patties, dear?”, do yourself a favor, flip the question and ask for the check instead.