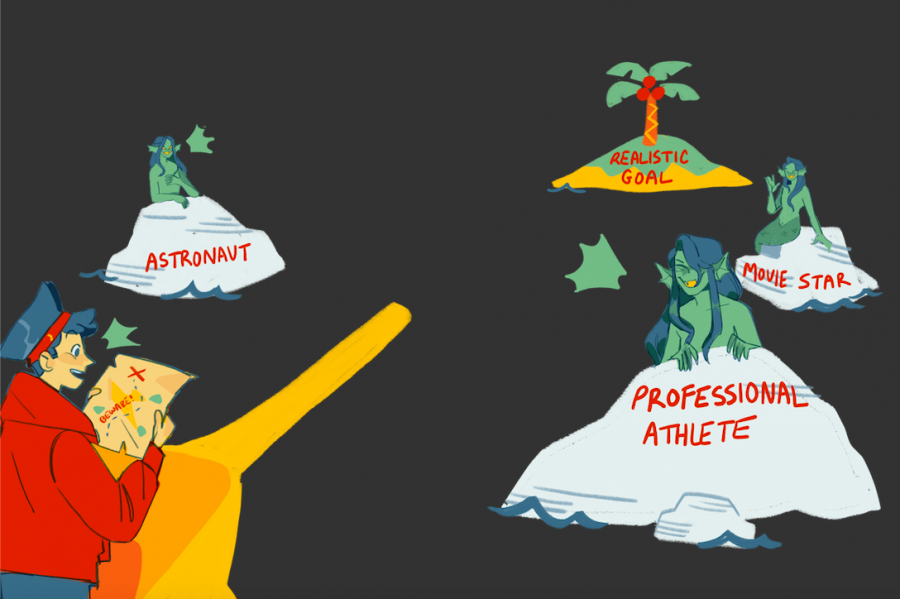 We need to reconfigure our internal compasses to help us avoid the allure of unattainable goals and instead find contentment in reality.

We’ve been robbed. From Disney, to Apple, to Gatorade to Nike, the swindlers are overt about their work. What they’re doing, though, isn’t illegal; they’re not defrauding us. They’re robbing us of reality.

According to the consumer advocacy organization New Dream, children can begin establishing brand loyalties at just 2 years old — and corporations, as you might expect, pounce on these loyalties. After all, most companies are in the business of selling a dream. Of spoon-feeding people the timeless, entrancing adage diffused so extensively throughout the world it feels almost axiomatic: that you can be whatever you want to be.

But that couldn’t be further from the truth.

You can’t, in most cases, be whatever you want to be. In his 2009 speech at a ceremony celebrating the 100th anniversary of the NAACP, then-president Barack Obama echoed as much, saying, “[Kids] might think they’ve got a pretty good jump shot or a pretty good flow, but our kids can’t all aspire to be LeBron or Lil Wayne.”

The problem, though, is not with kids — it’s with society. The over-saturation of exclusive jobs’ depiction in media — especially in movies — distorts the realism of kids’ dream job choices; data from a 2015 Fatherly survey, for example, showed boys’ and girls’ dream jobs as professional athlete and doctor, respectively. While it’s important kids formulate their aspirations unencumbered by others’ expectations, we — societally — can’t continue championing the ‘you can be whatever you want’ rhetoric. It’s disingenuous — because society doesn’t actually give kids that freedom.

Whether it’s being a professional athlete, a premier rapper, an astronaut, a heart surgeon or any other career located in its field’s respective stratosphere, a job’s exclusivity inherently makes it coveted and idealized. Exclusivity inherently relegates most people to the sideline.

There are, though, other factors impeding the pursuit of one’s dreams. In his book “Outliers,” award-winning author Malcolm Gladwell writes how “it is those who are successful who are most likely to be given the kinds of special opportunities that lead to further success.” This notion applies to the NBA. For example, a 2016 Wall Street Journal study determined 48.8% of players are related to “elite” athletes (athletes who have played professionally, for a national team or collegiately). English sociologists Sam Friedman and Daniel Laurison’s work also illustrates this notion. Their book “The Class Ceiling: Why It Pays To Be Privileged” spotlights another example of this phenomenon in action, explaining how it is simultaneously more inconvenient and less lucrative for English people from working-class backgrounds to secure “elite” occupations (e.g., doctor or Hollywood producer) compared to their middle and upper-class counterparts.

Essentially, the ‘rich’ get ‘richer.’

And it is the world’s businesses facilitating this phenomenon. According to Statista data, Nike spent $1.47 billion and Disney spent $3.15 billion on ads in the United States in 2019. As companies, such as these two, spend outrageous amounts of money to advertise their products, their messages become omnipresent. We’re told to “Just Do It” — but not told how.

These corporations don’t tell us the odds are stacked against us. They don’t lay out any roadmaps. They court us by flaunting the specious benefits of their products, a mirage intended to convince us of their creation’s importance in helping our illusory dreams materialize — thereby reinforcing the misconception that most dreams actually materialize. More importantly, it exacerbates the disappointment we feel when our dream isn’t manifested. Thus, changing the way we think about our future has been left to, well, us.

Oftentimes, when offering advice as to how we should adjust, writers broaching this topic seem to believe the only solution is to accept being average. To accept that the well of untapped potential eventually runs dry.

We’re not doomed to mediocrity (if that’s even a bad thing) simply because most people can’t become whatever they want to become; we just have to be comfortable with change. Comfortable with adaptation. Comfortable with forging onward. You may not become the venture capitalist or rocket scientist you always told yourself you’d become, but that doesn’t mean you have to tether yourself to a passionless, average existence. Shoot for the moon because, as the saying goes, missing it still means you’ve landed among stars.

Obviously, there are people who envision themselves becoming something much more attainable than “professional athlete” and more realistic than “superhero” — and I salute them, as it’s something I’m still working toward. While even they may not actualize their dream goal, they’re closer to the reality of life we all, for better or worse, arrive at.

And nothing can steal that finality from us.