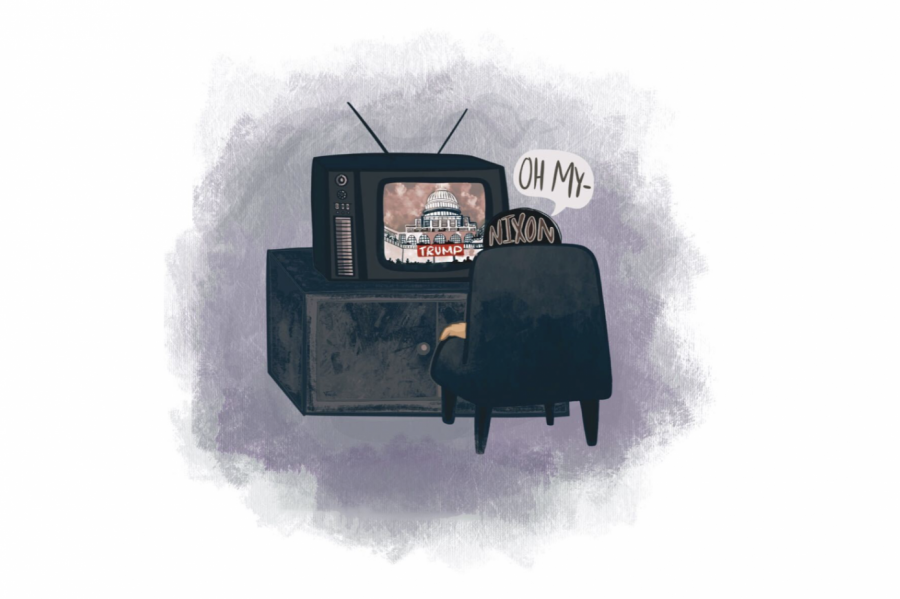 Nixon created an irreparable divide between the White House and the rest of the world. That has never gone away - in fact, it has only gotten worse.

We meet again. I really hate to bother you a year later — I’m sure you’re enjoying a tax-free afterlife — but if you haven’t heard, Congress impeached 45. Yes, for the second time. He keeps making you look better and better.

I wish you could write me back, Mr. Nixon, because I’d really like your thoughts on this one. In your era, would any president have done enough damage to sanction a second impeachment, especially one that has continued beyond his term? I don’t think so. Even you knew better than to reach that point. Unfortunately, the 117th Congress didn’t have the courage that the 39th seemed to — our former president was acquitted of his crimes.

What exactly are those crimes, you might ask? On more occasions than one, 45 gave a blatant middle finger to the election process, to the people, to his co-workers — even to you and all his predecessors. I’d like to think in your time, he would have been shut down even before the election, since that’s when he spread the baseless claims that the election was rigged. It’s obviously different now.

He killed five people as well as endangering House representatives and senators after encouraging the most violent coup on our nation’s capital since 1814, when British troops sailed into Chesapeake Bay and burned the Capitol and other government buildings. I’m not sure if you have CNN in the afterlife, so I figured a short synopsis was appropriate. But even more than a month later, those words are still hard to recognize as reality.

Here’s the thing, Mr. President. Here’s where the two of you differ. The punchline to your who-done-it — where the world finally realized you had a sneaky hand in an attack on democracy — came at the end of your story. After Haldeman, Mitchell, Colson, Ehrlichman, Dean, Butterfield and more had given their testimonies and had their secrets unveiled, the pot of gold at the end of the rainbow was you.

This time, we could already see where the colors touched the ground. We knew he incited the attack — the speech was broadcasted on live television only a few hours before the soon-to-be criminals were banging on the doors of the Capitol. We didn’t have to look far to know that the then commander in chief held responsibility for this. Now we are in the process of working our way down from the Oval Office, uncovering House representatives, other lawmakers and conspiracy theorists in their aim to take down our government.

Because of this, I think we are desensitized. People weren’t surprised on Jan. 6. Shocked, yes. Angry, yes. Some were gleeful, even. But no one had the same slacked jaws as they did on Aug. 8, 1974. And that’s why I’m scared for us.

Yes, we have a new president now. But I don’t think his oath of office solves the problem of senators raising their fist in solidarity with mobs of people screaming for Nancy Pelosi’s blood. His election didn’t stop Americans voting for people who mock the disabled and hallow the racist. When Democrats sing praises for former Vice President Mike Pence and Senator Mitt Romney, you know we still have a lot of work to do.

A few days after the siege on the Capitol, I was watching CNN (how liberal of me). A reporter asked the guest speaker how exactly we fix this dangerous divide. The speaker said it was the GOP’s job to step toward middle ground first, since they gave 45 a platform and bear responsibility for his power. He started fumbling his words, however, when asked how exactly that will happen.

I’ve thought about this reporter’s question a lot since listening to that exchange. Sometimes I expect the perfect solution will pop into my head, ready to fix it all. (It hasn’t happened yet.) I asked you in my last letter if you see any remaining remnants of your less polarized world, but I’ve grown a lot since then. It’s with a heavy heart, but a lot of thinking under my belt, that I say: Mr. President, if there is a bridge to be rebuilt and recrossed, we do not possess the tools to do so. Until the wounded Republican Party, your safe haven, can begin to make reparations and take humble steps toward the rest of us, we in blue must do our best to forge ahead and do right by the people, with or without the GOP. Thanks to the America you started, that is the only option we have left.