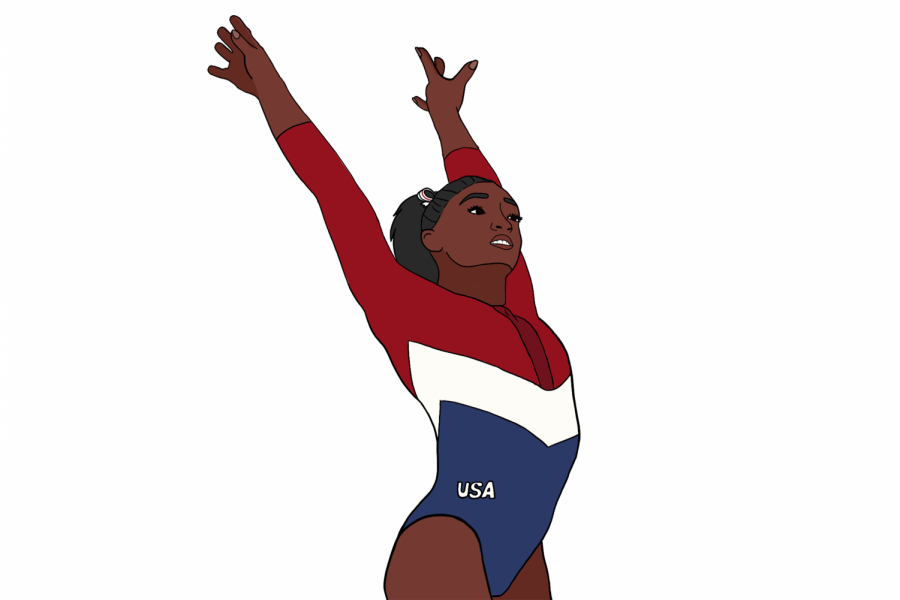 Even though 11,656 athletes competed in Tokyo, one girl was the face of it all.

That’s how many people came to my mind when I thought about the 2020 Olympics. Even though 11,656 athletes competed in Tokyo, one girl was the face of it all. From life-size cutouts at the grocery store to what seemed like every Olympic commercial, it was impossible to not be excited to watch her compete. Rarely did anyone mention the Olympics without saying two words: Simone Biles.

On Sunday July 25, women’s gymnastics kicked off with the qualifying round. Although Biles finished with the highest score, she looked “off” at moments with frustrated facial expressions to prove it. Afterward she wrote on Instagram, “I truly do feel like I have the weight of the world on my shoulders at times.” Based on the months leading to the Olympics and all the expectations we had for her, I was not surprised.

Two days later, many of us woke up to the news that Biles had withdrawn from the team finals for mental health reasons. We found out that Biles was experiencing what gymnasts call “the twisties:” a dangerous sensation where gymnasts can’t recognize what they are doing in the air, affecting their ability to land safely. On Instagram, Biles wrote that it feels like “not having an inch of control over your body.”

Biles’ description on social media came after people were accusing her of being “a quitter” for withdrawing from the competition. Like Charlie Kirk, conservative activist, who called Biles a “sociopath” and “shame to the country.” And Aaron Reitz, Texas’ deputy attorney general, who although later apologized, initially called her a “national embarrassment” in a tweet. He also compared Biles to Kerri Strug, former USA gymnast, by posting a video of Strug helping her team win gold in 1996 with an injured ankle.

Reitz’s comparison of another gymnast competing through an injury to Biles’ withdrawal shows a problem our country has: mental health isn’t treated seriously, especially in sports. We expect athletes to always push through pain. Never give up. Yes, athletes absolutely must be tough. Sports are not easy. The challenge is what makes them so great. But when an athlete is struggling physically or mentally, to what extent should a sport sacrifice someone’s well-being? Athletes deserve enjoyment and safety in their sport. And when that’s not the case, they should do whatever it takes to get healthy. Biles made the tough decision to listen to her mind when it meant stopping something she’s been working her whole life for. But some non-gymnast, non-Olympians think it’s OK to call her weak?

Fortunately, many have also praised Biles for her decision. Like her old teammates, Laurie Hernandez and Ally Raisman who commented on the pressure put on athletes at that level and Biles specifically. “She has pains like all of us, she has stress like all of us,” Raisman wrote in an effort to remind the world that Biles is human, too. Other celebrities outside of sports, like Michelle Obama, Justin Bieber and Taylor Swift, have also supported her. Biles responded to the praise on social media writing, “The outpouring love & support I’ve received has made me realize I’m more than my accomplishments and gymnastics which I never truly believed before.”

Biles’ withdrawal isn’t the first time a world-class athlete has put mental health in the spotlight. In May, Naomi Osaka, tennis player currently ranked number two in the world, dropped out of the French Open due to mental health concerns. And in 2020, Michael Phelps, 23-time Olympic gold medalist swimmer, narrated and co-produced “The Weight of Gold” where he spoke about his mental health journey.

It’s time for the world to learn that sports – or anything else – should not come at the cost of happiness. Biles took care of herself, as she should, and no one should be angry at her for that. A 24-year-old, four-time Olympic gold medalist, survivor of sexual abuse, championship-title-winner while passing a kidney stone, most decorated gymnast in the world is not a “quitter” in any way. Instead she is a role model. One who stays to cheer on and hug her teammates while inspiring them to win medals even after making one of the hardest decisions of her life.

Even though Biles owed us nothing, she taught us something. We learned that even the best in the world have a hidden opponent. Pressure affects them. They have “off” days. Sometimes they have to walk away. But that doesn’t stop them from being the “biggest cheerleader” for their teammates. And even coming back to win bronze. Biles inspired us in a way she never could have on a podium with a small piece of gold. She showed us that “the G.O.A.T.” is human too.