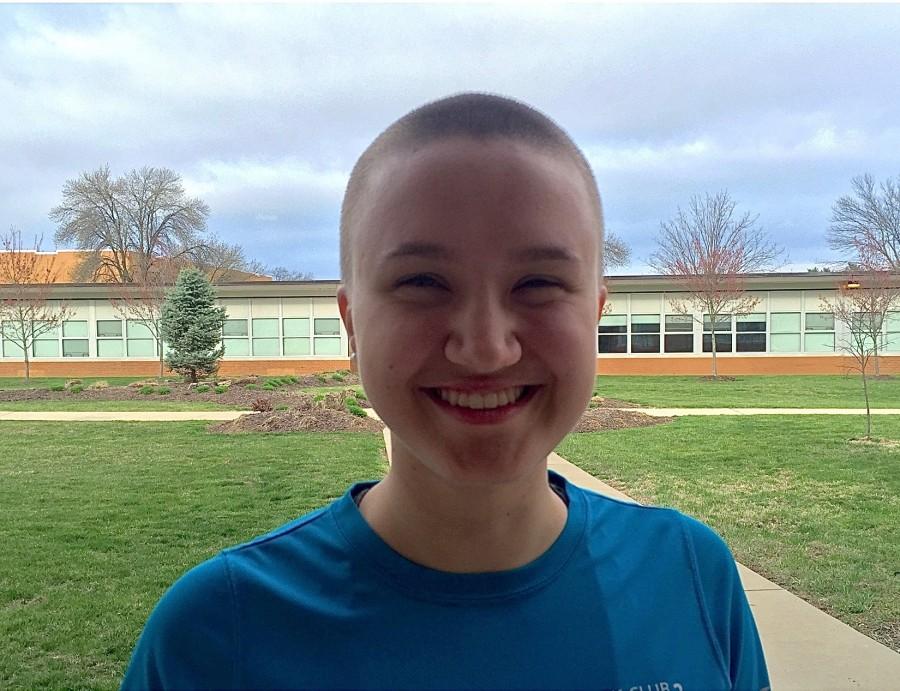 She sat on a stage in the middle of Helen Fitzgerald’s Restaurant and Pub, her friends and family cheering below her and an electric razor buzzing in her ear. As she watched tendrils of her hair drift towards the ground, her face broke into a proud smile.

Sophia Roth shaved her head March 5, 2016 in memory of her YMCA swim team member, Jacob Swiderski, who passed away from brain cancer at age 9. Sophia raised $2,125 to support childhood cancer research through the St. Baldrick’s Foundation.

“I’m passionate about kids and making sure everyone is given equal opportunities,” Sophia said. “I know a lot of government funding doesn’t go toward childhood cancer research, so [St. Baldrick’s gave] me the opportunity to help pay for the expenses of helping someone survive, and I think that’s essential.”

Christina Koch, senior and close friend, went with Sophia when she shaved her head. She said she is inspired by both Sophia and the St. Baldrick’s Foundation.

“Experiencing people shaving their heads for kids with cancer is very powerful because they are willing to take away a big part of themselves for other people who are unable to make the choice,” Koch said. “Sophia is someone who is willing to stand up for what she believes in and, most importantly, stand up for other people. I think she is different from other people in the sense that she is the type of person to put other people before herself without even giving it a second thought.”

Sophia said that because she is bald, she sometimes receives lingering glances from strangers. However, she said this does not bother her in the slightest.

“I get some weird looks outside of school, but mostly inside of school people are [okay] with it, and my friends have been my biggest support system,” Sophia said. “But, when I do get weird looks, it’s not a big deal because I feel like I did something really good.”

Krisi Swiderski, Jacob Swiderski’s mom, said she and her family were deeply touched by Sophia’s decision to shave her head in memory of their son. She described Sophia as a kind spirit who lifts up those around her.

“Jacob was bald several times during his battle [with cancer], and bald kids get stared at by kids as well as adults,” Swiderski said. “The fact that she would willingly put herself in that position in honor of Jacob shows you what kind of person Sophia is. We are so proud of the young lady she has become.”

Sophia plans to eventually become an officer in the Navy, either through the Naval Academy or a Naval program while at Christian Brothers University. She said she wants to make sure other people can have a better life, and shaving her head was the first step toward achieving that goal.

“After [I cut my hair] I was a lot colder, but I also felt really empowered,” Sophia said. “I think if anyone has the opportunity to do it, they should because hair grows back, but lives don’t.”