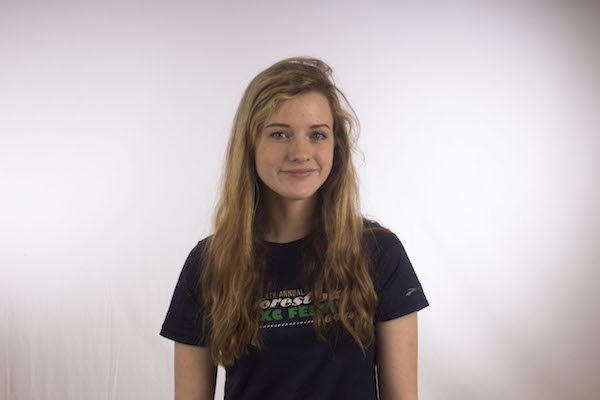 Waking up at the crack of dawn to try and avoid the inevitable heat and humidity of St. Louis summers and run five miles a day isn’t what most people would call fun, but Claire Bradfield started this routine at the beginning of freshman year and has been doing it ever since.

At the beginning of the 2013 school year, Claire had to start all over at a new school with new faces. She attended Mary Queen of Peace for grade school, but only a few of her classmates went on to KHS. Claire’s mom told her that she signed her up for cross country the night before falls sports began so Claire could meet some other students. Claire had never even gone on a run before, but figured she would give it a try.

“Obviously, I was a little mad at first,” Claire said. “I had to get up at 7 a.m. and go running, but after I went and met a lot of nice people, I thanked her for it. In all the races she was really supportive, but not like the other parents were. She would tell me, ‘Don’t be afraid to stop or slow down, [the coaches] will understand, it’s OK if you take a little break.’”

Claire decided that running would help her stay in shape for soccer, which she played in grade school. Once Claire built up her endurance, she began running at a more competitive level and worked her way up to the varsity cross country team by about halfway through her freshman season. That spring, Claire made the JV soccer team, but she realized she enjoyed running more and chose not to try out for soccer the following year.

“It was awesome to have Claire [on the cross country team],” Gina Woodard, girls’ cross country coach, said. “Claire is one of those people that got better and better as the four years went on. She’s awesome and she’ll do great things and I wish her the best.”

Throughout her junior year, Claire was sick and ran out of energy quickly. At the end of one of her races she drank from someone else’s water bottle and came down with mono. However, according to Woodard, Claire is not a runner who gives up and she continued to run at a high level and push through the pain and fatigue.

“It was honestly just annoying because I would always get tired so much quicker than I usually would,” Claire said. “It was a very frustrating experience, because I would barely be moving, but my breath and heart rate would go up really fast. “

The summer before her senior year, Claire attended many of the cross country runs and led the group when the captains, Molly Hooks and Annie Murphy, weren’t there. According to Maeve Bradfield, junior and Claire’s sister, she became a great role model to all the girls on the team. At the end of the summer, Woodard chose Claire as the third captain.

“She really wanted to be captain,” Maeve said. “She loves cross country so much and she also is a great leader. She leads by example, she’s just so nice to people, and everyone loved her.”

Claire’s biggest supporters on the team were Maeve and close friend Tabby Stowers, junior. Claire and Tabby would always do all the workouts together no matter if it was a speed or distance day.

“Having Tabby on the team for my last year of cross country really made my senior year a lot more fun and definitely my best year overall, because I had a good friend that could run my pace and always had someone to talk to,” Claire said. “I remember at [the meet at] Jefferson Barracks, I was falling really far behind and I really just wanted to stop running, but she told me that we would run together and we ran the rest of the race side by side.”

At the districts meet Claire’s senior year, even though the team placed seventh overall, Claire and her teammate Ally Gooden, freshman, placed among the top 30 runners and made it to sectionals. Although, Claire didn’t make it past sectionals, she believes that cross country helped her become more outgoing, and it was one of her favorite parts of high school.

“Cross country definitely helped me to get out of my shell a lot more and I met a whole bunch of really nice people in cross country and it really taught me good work ethic,” Claire said. “I just really loved all the experiences and people I met.”