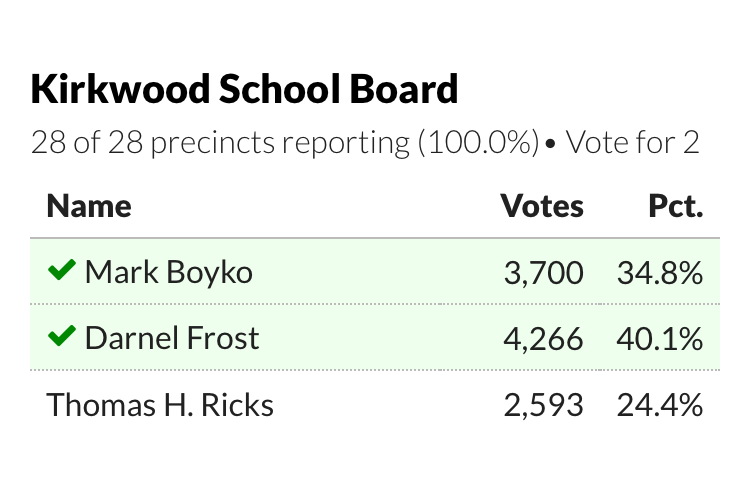 Kirkwood citizens came out to the polls on Tuesday, April 2 to cast their votes in the school board election.

Kirkwood citizens came out to the polls on Tuesday, April 2 to cast their votes in the school board election. Mark Boyko and Darnel Frost were elected. The results were updated throughout the night by the St. Louis Post-Dispatch. TKC compiled the final results:

Below are brief profiles of the two winners by the Webster-Kirkwood Times:

Frost, 912 Woodlawn Ave., is the only incumbent running for re-election. He has served on the board for six years, serving two of those years as the board president.

Frost and his wife, Amy, have three children: A 2014 Kirkwood High grad, a current Kirkwood High student and a Nipher Middle School student.

Frost has been involved in Kirkwood schools and the community in several capacities over the years. He has chaired the district’s task force dedicated to eliminating the achievement gap, and has served on the city’s human rights commission. He also coaches basketball and soccer.

Frost believes his experience on the board and commitment to educational equity makes him the best candidate.

“Our school board needs continuity and my six years on the board provides that,” Frost said. “Equity for all students has been my priority during my time on the board, and I will continue that. We’re working on some big things right now, and I’d love to be able to see them through to completion. I always make decisions using the lens of what’s best for our children.

Boyko, 3 Boxwood Lane, moved his family to Kirkwood four years ago for the school district. He and his wife, Meg, have two children: A daughter attending Robinson Elementary and a son at Nipher Middle School.

Although Boyko is relatively new to the district, he is no less committed to its excellence.

“We chose this school district intentionally, and the sense of community here is stronger than I’ve ever seen,” he said. “Everyone here has a mutual history that is binding whether they’ve been here for a month or five generations, and I think that’s something we should be proud of.”

Boyko believes his work as an attorney and experience managing the finances of a nonprofit with a budget about half the size of the district’s, will make him a valuable member of the Kirkwood School Board.

Boyko said if elected his priorities will be safety and security, helping all children and parents feel welcome, and setting all children up for success, which begins with ensuring that all students have access to preschool education.

Frost and Boyko will take office at the upcoming school board meeting on Monday, April 15.