An olympian is made over seas 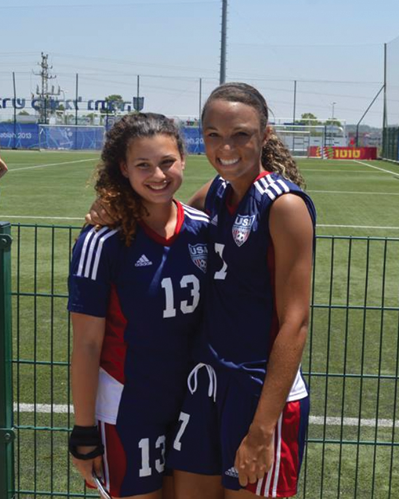 This summer, Sarina Dayan had an experience similar to no other student. After four days of tryouts in Santa Monica, CA last January, Sarina was chosen to be part of the 2013 USA soccer team at the Maccabiah Games hosted in Israel in July.

Although Sarina knew the experience was going to be exciting, she also knew that participating in the Games was not going to be easy.

“In Israel, we had four hours of training every day for a week, which included drills, shooting, scrimmaging and college type workouts,” Sarina said. “After that week, we started touring so we would have one to three games per day and then take time off and then play some more.”

After winning the first six games, Team USA qualified for the finals. “We played Israel in the finals and we won off a penalty kick 1-0,” Sarina said. “It was an awesome game, all the fans were excited and it was such a great atmosphere.”

“No words,” Hannah said. “I cried [when hearing the news]. I love watching her play and to see her accomplish something as big as going international and playing for her country. It was truly something different, and I’m so glad my child got to experience that.”

Although she went to Israel for her athletic ability, there was more to the experience than just the game. One of the requirements in order to participate in the games was being Jewish.

“Going to Israel and sitting in the stands, I got goosebumps. Being in Israel, I was no longer the minority, I was the majority,” Hannah said. “As I looked around, I was surrounded by people of the same religion as me, and to be in a place where our religion was founded–it was a surreal moment.”

After winning gold in the 2013 Maccabiah Games, Sarina hopes to lead the KHS varsity soccer team this spring.

“Getting the experience, the playing time and getting more touches on the ball to bring back to Kirkwood is going to help her and our team this year,” Phil Cotta, varsity soccer coach, said.

Sarina, along with her goals of improving in soccer, hopes to go to more international countries to compete.

“When I am a junior, I hope to play in Brazil at a tournament. It would take a lot of effort and work, but I’m up for the challenge.”