It’s the best kind of season 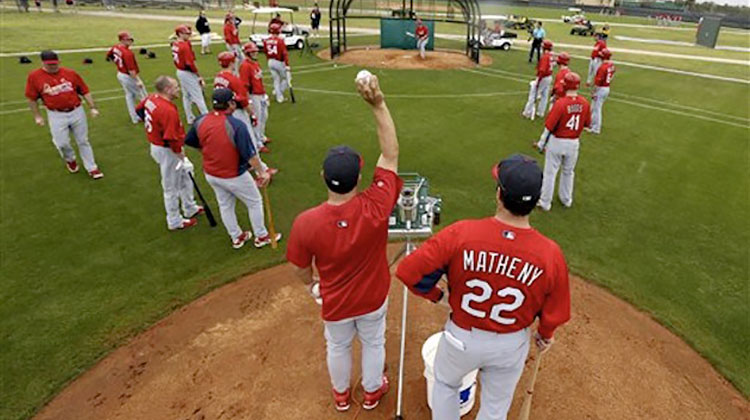 It’s that time of year again. The Earth gets greener, the air gets sweeter and the hibernating sea of red and white comes flooding back into Busch Stadium. It’s the best kind of season; it’s baseball season.

In early February, Major League Baseball players began migrating south to pre-season spring training camps. Spring training serves as a snapshot for the upcoming season, showing glimpses of if the season will end with a bust or with a World Series trophy. Fans clean the cobwebs from their top shelf, dust off the Rawlings glove and get ready for a wild ride full of unpredictable slumps and successes. Stationed in Jupiter, Florida, one of the first St. Louis Cardinals to show up to camp was long time catcher and seven gold glove winner, Yadier Molina. Sporting new arm tattoos and a 20-pound skinnier frame, Molina looks better than ever. His thinner self has spectators wondering if the thinner Molina will move quicker behind the plate and if his reduced figure will leave him fresher and stronger as a hitter. According to teammate Adam Wainwright, Molina knew he needed to slim down in the offseason in order to maintain his knees. He put himself in the gym and did just that.

Old faces such as Adam Wainwright, Matt Holliday, Jon Jay and Matt Adams surfaced later in the week, all with smiles and well-defined tans. Among the veterans, new faces arose as well, some young, some old. During the off-season, one of the newest assets retrieved by the Cardinals was former Atlanta Braves right fielder, Jason Heyward. The ‘Heyward Hype’ has lots of fans excited for what this slugger could do for the Cardinals. With numerous awards such as Rookie of the Year and Defensive Player of the Year thus far in his career, the 25-year-old has the potential to be outstanding, both offensively and defensively. Already, Heyward jokes about how his new teammates are “baseball nuts” and never tire from playing and discussing the game, according to Bernie Miklasz.

Known for their talent-packed farm system, the Cardinals produce some of the best young players in the game, especially pitchers. Carlos Martinez, relief pitcher, has the most skilled arm on the big-league club and will be given every opportunity to clinch a rotation spot this spring. In his company are pitchers, Kevin Siegrist and Marco Gonzales, both with smooth, strong arms, who hope to provide key support for the Cardinals later in the season. However, the pressure and their lack of experience in the Major Leagues may prove to be costly for the Cardinals, when the team needs these young pitchers most.

Aside from pitchers, notable infielders Kolten Wong and Matt Adams are becoming key backbones to the St. Louis Cardinals squad. Wong, upon being fantastic after his return from the disabled list last July, provides the Cardinals with a solid, dependable second baseman with power, speed and agility. Adams, although dazed by left-handed pitchers, was a powerhouse last year, closing the season with 34 home runs and a .283 batting average. With Adams hitting well, the Cardinals gain a key asset to an unstoppable line up.

With the well-known trademark of acquiring new and old players, the Cardinals are set to play fantastic baseball this year. Since 2004, the organization has produced the most regular season victories in the National League and has crowned themselves with more postseason wins than any other team in the majors. As always, with all the wheels and gears turning, the team has the weapons to win ball games against every team they face. With incredible raw talent from young starters to leadership from masterful veterans, the team has potential to be unstoppable and the best team east and west of the Mississippi.