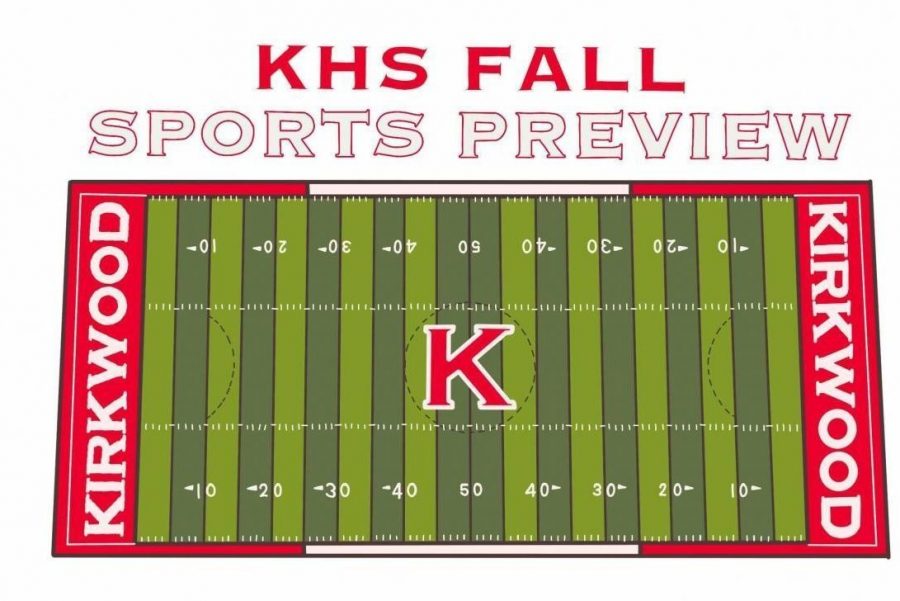 TKC spoke with a head coach or senior athlete from each team about their upcoming season to gain insight on each sport. Art by Mara Mueller.

TKC spoke with a head coach or senior athlete from each team about their upcoming season to gain insight on each sport.

TKC: What is the impact that club games can have on your team’s preseason?

JG: “This is the first summer that they’ve had club tryouts while the high school tryout process is happening. Several high school coaches I talk to throughout the summer don’t like this. We feel like players need a break with high school tryouts already in the summer. Having both [tryouts] puts the girls in a position to work hard to not only make a high school team, but their club team as well, which can be tiresome for them.”

TKC: Do you think that the last season for a senior on the volleyball team could be a motivator for them to leave on a good note?

JG: “One thing we talk about in the Kirkwood program as people, and as a team, is how we want to be remembered when the high school career is over. So, when [seniors] look back at the 2020 season, we improved and competed more than we did [in past years]. During every practice, the message we give the seniors in their last season is to play every single point like it’s their last play.”

TKC: Is there any advice you would give to a new tennis coach, or anyone who is

preparing as a player for an upcoming tennis season?

SW: “To a new coach, my advice would be to never give up on a player. Tennis is a sport that takes repetition and discipline, neither of which come easily. No tennis player is made in a night. It takes months, years to develop your skills. For a player preparing for a new season or any new tennis player, I would say a similar thing: that patience is key. You need patience in tennis, because you might be playing people who’ve been playing the sport since they could walk.”

TKC: What is something that you think the team can use that can fuel their play in this upcoming season?

SW: “It’s something they really already have, which is simply a great atmosphere on the team. I’d say almost a family dynamic, which motivates the entire team because it’s almost like we have a group of older sisters and younger sisters. The great thing about the team chemistry so far is that it’s formed naturally, not even set up all by the coaching staff.”

TKC: Are there any challenging opponents that you think will continue to be a tough matchup?

MB: [The] teams that have given us the most challenge the past couple years have been Parkway West and SLUH. Parkway West is a very solid team that is retaining a lot of their good swimmers from last year, and they gave us a great dual meet when we went against them. It’s definitely a team you have to make sure you’re prepared for. We matched up well against SLUH when we invited them to our invite meet last year, and they’re always a big contender for us when it comes to the state level.”

TKC: Are there any important goals for the team this season that you might not have accomplished last year, or something the team did well  and could repeat?

MB: “My expectation is always trying to get one of those top four places at the state level, that’s always our goal is to bring home hardware at the end of the season. We’ve got guys that are definitely going to have to step up after last year, to try to fill the roles of some of those top senior swimmers we lost after last season.”

TKC: What is the main part about KHS softball that you think any incoming freshmen or any new members of the team will like?

MC: “The community with the girls on the team, such as getting to know the upperclassmen, is very important for the incoming freshmen. Just to have somebody to ask questions to [helps] create a strong team bond. Being involved and getting to know people is definitely important for a successful high school experience.”

TKC: What is something you think the team can use to fuel their play this season?

MC: “About 10 seniors graduated two years ago, and around seven or eight graduated last year, so we’re a young team. But our returning varsity girls this year have a lot of talent. They’ve played a lot of softball over the summer, and I think we can build on their leadership they already have coming into this season.”

TKC: What’s the hardest part about preparing for a cross country season?

MK: “Getting yourself out to run consistently because it’s so hot in the summer. You have to get up early to run so you’re not out in the middle of the day when the temperature goes up. [It’s even harder] if you’re going to run by yourself and not with a group. It’s all about getting past that mental block of not wanting to go and getting your training done.”

TKC: Is there a particular meet or race in the upcoming season you anticipate will be difficult?

MK: “[There is] one race called Sioux Passage that is an extremely hill-friendly course in Missouri, where one of the Hazelwood high school [team] trains. It’s called ‘the hilliest course in the midwest.’ It’s safe to say that race will be one that will challenge me a lot.”

TKC: How does Coach Owens mentally prepare the squad for an upcoming season, including this one?

TKC: What’s a personal goal that you want to accomplish this year on the team that you weren’t able to attain last year?

CK: I definitely would like to lower my scores during each match as much as I can, at least by a few strokes. Every match we play during the season is nine holes, so there will be plenty of opportunities for me to build and better the scores I’ve previously gotten on courses we played on during 2020.”

TKC: How do you think cross country meets will change as a whole now that it’s the season after COVID shortened the 2020 season?

WB: “That’s a great question to which I have no real answer. Last year was a mess and we couldn’t run every single person on our squad, we had multiple meets where we could only take seven athletes in each class — seven varsity, seven JV, and seven freshmen. That was awful since we want every kid to put on that uniform to run and get better every week. However, I don’t really have an answer for what the format of a meet is going to look like. Are we going back to 2019? Or is it going to be similar to 2020?”

TKC: Is this group of guys different from previous years and if there is a state championship, how do you see yourselves in that picture?

WB: “We always go into the season with the notion to compete. We have a senior leadership group that have worked their butts off this summer like Patrick Lee, Sebastian Baker, Trevor Kates and Noah Bronstein and I’m really excited about it. Currently, since we don’t have hardcore COVID-19 restrictions, we are hoping that we can help the up and coming Sophomores and Freshman get up to speed very quickly since their last seasons wasn’t normal. Hopefully nothing changes.”

TKC: What has kept you in shape in order for you to prepare for the season?

DG: “During the winter I wrestle for KHS and I also play club soccer on the side, so that helps a lot. In the summer, I  try to train as much as I can in order to get myself into good physical condition.”

TKC: As a senior on the team, are you told to present a team message or motto to help inspire the younger players?

DG: “It’s the seniors that make the team. If the seniors aren’t into it then the juniors won’t be into it, then the sophomores. I believe the seniors really do have a big role to play since they are older and they really have to show that they are into what they’re doing so that way it doesn’t affect everyone else.”

TKC: How would you describe the typical field hockey tryout before each season begins?

BB: “It’s usually about a week long in length. Last year, every other day we worked on conditioning during the tryout practice. Then we do basic skill drills and scrimmages to see how the players are doing.”

TKC: How is the team looking to rebound after their last year was cut short due to COVID-19?

BB: “ It’s definitely going to be a completely different varsity team this year. Last year we had about ten seniors, this year we have only about three or four. I’m definitely excited and the team is as well for a new season where we can perform more and do well.”

TKC: What do you think Jeremy Maclin brings to the program as the new head coach?

DJ: “He brings a lot to the program—he encourages the players to play better and also to be better off the field like in the classroom and in society. He looks out for everyone on a personal level.”

TKC: Is there anything that you want to accomplish before your KHS football career is over?

DJ: “I wanna finish this year strong because [it’s] my senior season. What’s important to me is doing the best I can to help my team win every week.”