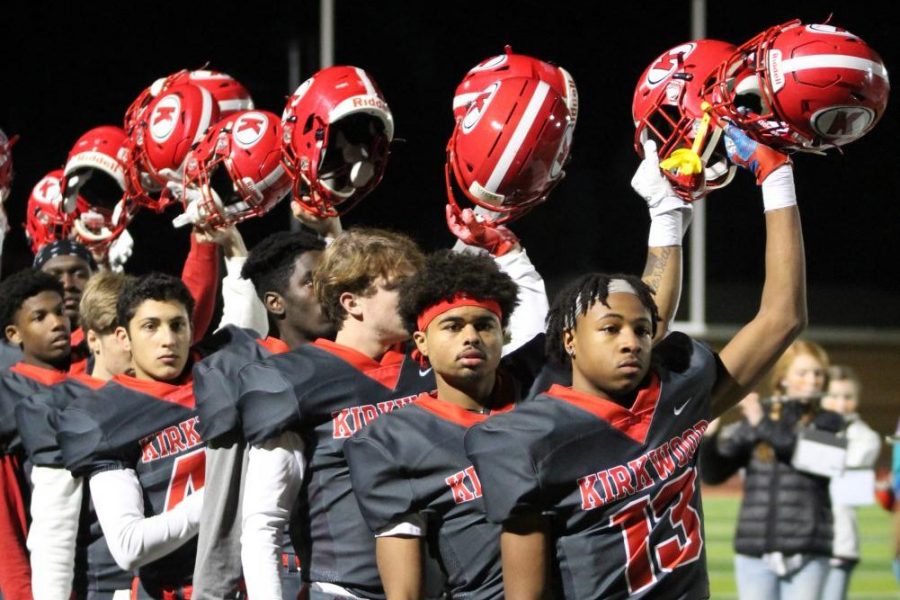 Juniors Mekhi Macklin (13) and Cole Johnson stand at the front of the line as the Pioneers raise their helmets at the end of the national anthem.

“Stay focused,” juniors Will Lee, Kannon Nesslage and Jaylen Phipps each said after the game. These players, along with the rest of the Pioneers, keep this message in their heads to remind themselves that now it’s win or go home. And they don’t want to go home, advancing to the next round of the MSHSAA (Missouri State High School Activities Association) football playoffs. The Pioneers will travel to play at Joplin High School next Friday, Nov. 8.

KHS varsity football (6-3) hosted Northwest (Cedar Hill) High School (5-5) on Friday, Nov. 1, and ended the Lions’ season with a game they will want to forget. The Pioneers poured on an offensive onslaught, with seven different players scoring at least one touchdown to win 54-7.

KHS began district playoffs fresh off a huge comeback win over the previously undefeated Ladue Rams Oct. 25. The Pioneers kept their foot on the pedal since the fourth quarter against Ladue, now having scored 83 points in their last five quarters of football.

“We were hyped about today,” Phipps said. “We just wanted to win and get back into practice and get ready for [next week].”

It took two Northwest possessions and a KHS possession before KHS scored with five minutes left in the first quarter. The Pioneers’ coaches effectively used the screen pass (a short pass to a wide receiver, who has a line of blockers to help) in the first half, as Cole Johnson, junior, started the scoring with an 8-yard touchdown off a screen play. After Tucker Bass, junior, forced and recovered a fumble less than two minutes later, Jay Maclin, senior, took a screen pass for 26 yards to the end zone to extend the lead. The second quarter brought two passing touchdowns from Nesslage to Lee, the first one for 9 yards and the second for 48 yards on a screen pass. Cameron Macon, senior, ran in an 8-yard touchdown in between Lee’s scores. The Pioneers went into halftime with a comfortable 35-0 lead.

“All three phases of the game [were big tonight],” Nesslage said. “Defense shut them down, special teams did their job, [and the] offense did their job, so it was just a great team win tonight.”

Despite the wide lead, the Pioneers kept the pressure on after the half, as Phipps received the Lions’ opening second half kickoff at the 25-yard line and didn’t stop until he reached the end zone. Ryland Irvin, junior, took over the quarterback duties from Nesslage in the second half. Irvin and running back Nate Jones, junior, each had a rushing touchdown in the fourth quarter.

After the final buzzer, fans most likely looked at the score and were impressed with the Pioneers’ 54 points. But KHS’s defense was a bright spot, too, as the Pioneers tamed the Lions, who did not cross the goal line until eight minutes into the third quarter. An interception by Mekhi Macklin, junior, in the fourth quarter capped off the strong defensive performance.

“[The biggest part on defense was] staying locked in, really, because [our coaches] said that [Northwest] would try to get in our head mentally,” Macklin said. “We were there physically, but we had to be there mentally [as well].”

Comprised of five seniors who are all close friends according to senior center Matthew Connelly, the Pioneers’ linemen have received high praise from Coach Shelton and teammates for their contributions over the course of the year. They don’t necessarily fill the stat sheet, but their efforts are imperative to the team’s success.

“My [favorite] part of the touchdown was seeing my O-line block. There was just a big [opening for me], and I love those guys,” Lee said.

KHS’s half-day Friday, Nov. 8, will give the Pioneers time to take a four-hour bus ride to southwest Missouri. KHS, the four seed of eight teams in the Class 6 District 3 bracket, will take on the number-one seed Joplin Eagles, who eliminated KHS from districts last season with a 49-14 win.

“[Joplin] kind of embarrassed us last year, so we’re going there with a little bit of extra motivation and just trying to get the job done,” Nesslage said.