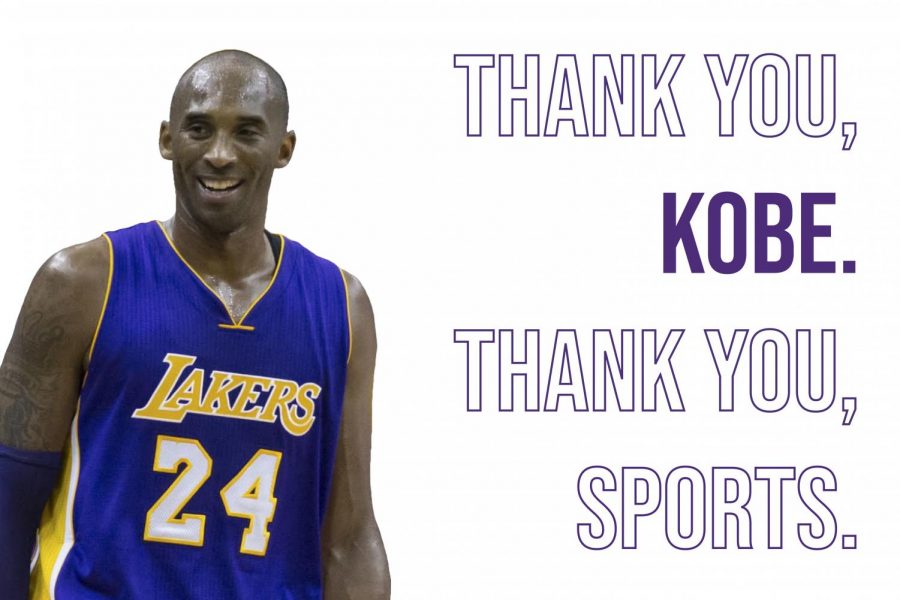 This photo is courtesy of Wikimedia under the Creative Commons License.

Note: This story was originally written by Ryan Davidson and published in the May 18, 2017 print issue of The Kirkwood Call. See the digital print version here.

I sat on Manchester, where Lindbergh becomes Kirkwood Road, when an alert popped up on my phone. Kobe Bryant tore his left Achilles. I rejoiced.

I was sick and tired of his ball-hogging habits and seemingly constant mindset that he was the best player on the court. To an ignorant 14-year-old, sports fanatics were tired of him, and it was his time to hang up the high tops. About to pass through both Kirkwood’s literal crossroads and figurative crossroads of starting high school, I clearly had a lot to learn.

But that October, having yet to practice on his damaged heel, he said something all sports fans can, and should, take to heart:

“Sports are such a great teacher. I think of everything they’ve taught me: camaraderie, humility, how to resolve differences.”

In my mind, these words of wisdom were synonymous with any great religion’s teachings. I was about to embark on a four-year journey that would teach me more about myself than I’d ever imagined.

When Big Papi and the Red Sox snatched the 2013 World Series from the Cards, I learned to lose with dignity. The Red Sox had been through the wringer the previous season, and they played ball with class and respect, the way it should be played.

But when Auburn defeated Alabama in the 2013 Iron Bowl on a 100-yard return from a last-second field goal prayer, I learned it was OK to celebrate a victory, too. I had long hated ‘Bama for their constant knack to recruit the best of the best and win year after year, so watching this unique David vs. Goliath finale (Auburn was ranked fourth in the country, too…) made me realize there is always more than one way to win.

When Seahawks coach Pete Carroll called for a pass intercepted by the Patriots’ Malcolm Butler that sealed Super Bowl XLIX, I learned we all make mistakes. He is one of the most highly touted football coaches of his time, and he paved the road for Devil incarnate to hoist the Lombardi Trophy, but I forgive him. Kind of.

When Villanova’s Kris Jenkins sank an off-balance three at the buzzer to defeat North Carolina in the 2016 Final Four to claim the championship, I learned to appreciate the little guy. Teams like Duke, Kentucky and North Carolina dominate college basketball, so watching even somewhat of an underdog win on such a huge play shook not only my living room, but my perception of what a champion can look like.

And, of course, when the already-planned-the-victory-parade Warriors fumbled away the 2016 NBA Finals, I learned how you finish is just as important as how you begin. Sure, the Dubs won the season’s first 24 games and finished with the best regular season record of all time at 73-9, but the whole year amounted to nothing when the Cavaliers reigned, and that’s what everyone will remember.

When the Cubs came out victorious in an epic battle with the Indians in the 2016 World Series, I learned that there truly is hope for everyone. Sure, the Cubbies had the best record in the majors, and were clearly the best team, but it took them 108 years. Don’t quote me on this, but I’m pretty sure the last time they won the World Series was before Joe Maddon’s hair turned grey.

And on a heavier note, when the baseball world lost young stars Oscar Taveras, Jose Fernandez and Yordano Ventura, I learned not to take anything for granted. Life is precious, and Kirkwood will forever remember three of its young stars who never had the opportunity to show the world their full potential. Aly, Tanner and Hannah: Kirkwood and the Class of 2017 will never forget you.

The date is now April 23, 2017. As I cross under I-44 on the way to return my prom tux, after Kirkwood Road has turned back into Lindbergh, I start down the next crossroads in my life. And, as I do all the time, I think about what the sports world has in store for me today.

The Cardinals play Milwaukee, with Mike Leake on the mound. The first round of the NHL Playoffs wrap up, and the Blues have survived. The Celtics take on the Bulls in the Windy City as they try to even up their series.

As hard as it is for me to say this, thank you, Kobe. Thank you, sports.