The Rink is Alive With The Sound of Skates 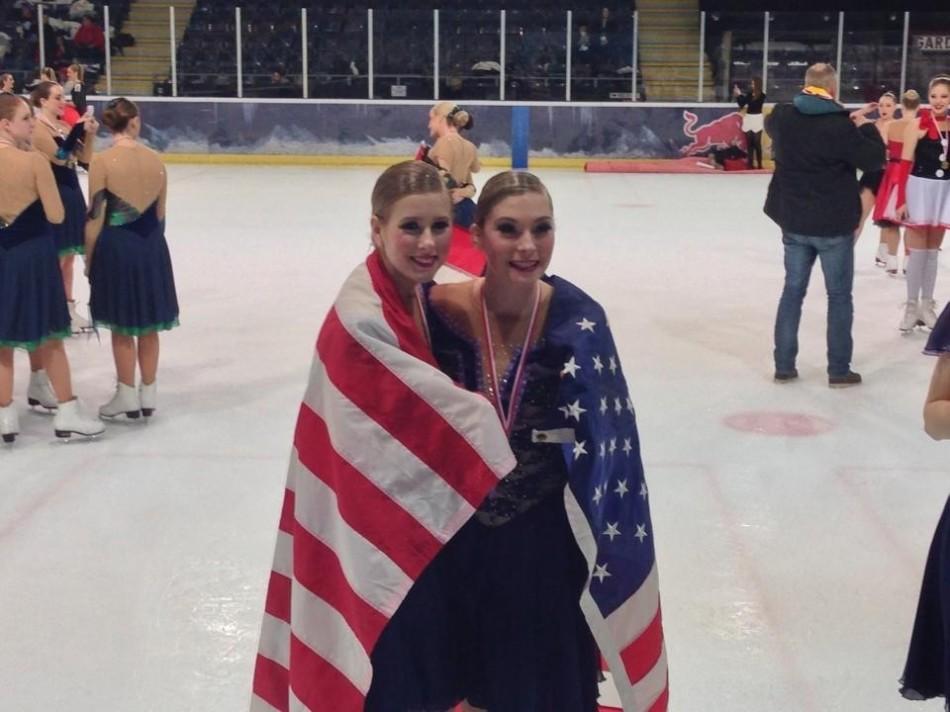 When Ella Foley stepped on the ice in Austria, she was ready. In her head all she could think about was how long she had been waiting for this moment.

In January, Foley and Hannah Blanner had the chance to display their talent on ice in Salzburg, Austria. Both Foley and Blanner are part of the St. Louis Synergy Junior team, which represented the United States in synchronized skating. In order to represent the U.S., Synergy had to qualify at sectionals and place in the top seven at nationals to be nominated for a competition. Since Synergy placed seventh, they knew they were going to get assigned an international competition but they didn’t know where.

“There were competitions in France, Italy and Sweden, but we didn’t know until last August that we were going to Austria,” Foley, senior, said. “I got an email from my coach one night and I couldn’t have been happier.”

Synergy’s Junior team started two years ago, consisting of 19 girls ranging from ages 15 to 20. According to Foley, the team is already leaving a mark at skating competitions.

“Last season was our first season as a team and no one had any expectations of us going to the top,” Blanner, junior, said. “This season, our goal was to put on a really good showcase and do the best we could.”

According to Foley, Synergy has three-hour practices three days a week; two hours on ice and one hour in the gym. After auditions in the spring, Synergy works during the summer on choreography and skates competitively from the fall to the next spring.

“This season was unbelievable,” Foley said. “We had an incredible year and all of our hard work paid off.”

When Foley and Blanner returned to the U.S., they weren’t empty handed. Instead, they carried the eighth place trophy out of 19 teams.

“Eighth place is pretty good considering we were a first-year international team because that was the first time the judges saw us,” Blanner said. “It was special to go to Austria with my team and do well.”

Synergy competed against several teams from other countries including Russia, Finland, Canada, Japan and the Czech Republic. Although Synergy went to Austria to compete, the team did not fail to explore their surroundings by taking day trips to Salzburg.

“In our free time, we were able to walk around Old Salzburg and see the beautiful history the town holds,” Kameryn Truman, assistant coach of Synergy, said. “We went on a Sound of Music tour where we got to see sites used in the movie.”

The team also went on tours in the Alps, ate at the local restaurants and shopped at multiple stores. According to Foley, the mannerisms were especially hard to learn.

“We learned if you ask for tap water, it would be considered rude because it’s a custom to always order sparkling water instead,” said Foley. “Also, if you ask for ice with soda, the waiter would give you a weird look because soda isn’t served with ice.”

Leading up to the days of competition, Synergy was prepared to compete because of all the hard work that was put into practice, according to Blanner. When it was time to compete, Blanner knew Synergy would be ready.

Synergy competed for two out of the five days in Austria. Since this was Synergy’s first international competition, the team didn’t know the competition that well, according to Truman.

“The competition days were surprisingly similar to those in domestic competitions,” Truman said.
“However, it was amazing to see what other countries had to offer in the sport of synchronized skating and getting to meet people from all over the world that share the same passion.”

Foley had been looking forward to going to Austria since the beginning of the season in August. Looking back on the experience, Foley said it was everything she had hoped.

“Austria was beautiful,” Foley said. “And to be competing and going international for the first time with my team, it was truly a special week.”

Foley and Blanner hope that their success as a team will continue.

“I love seeing us grow as a team,” Blanner said. “I can’t wait to see what other accomplishments the future holds.”