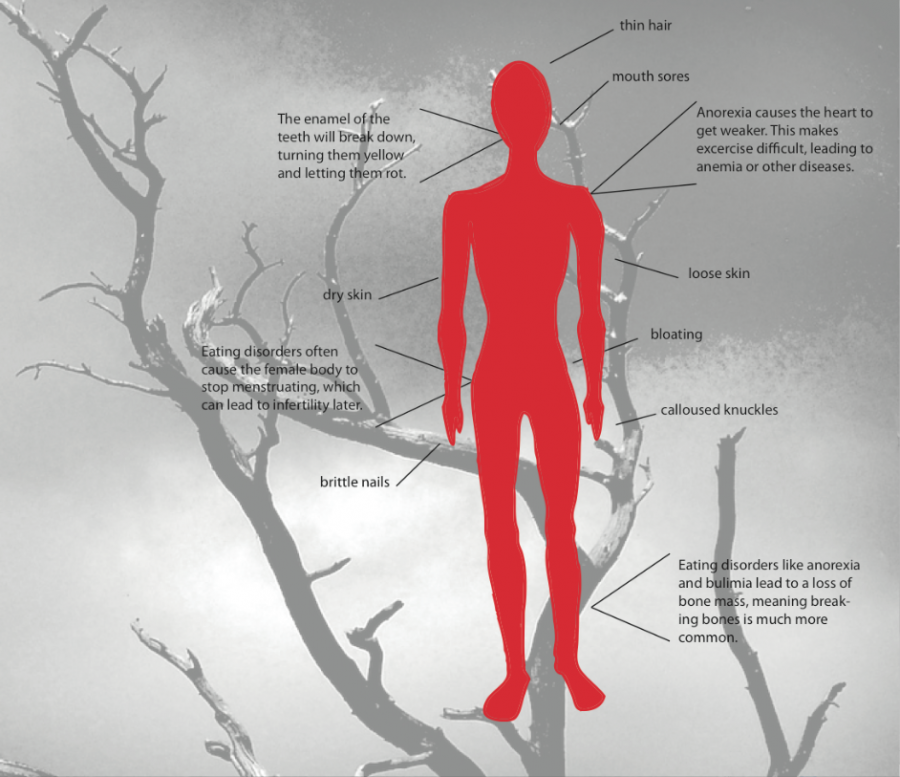 Anorexia nervosa and bulimia nervosa are mental disorders, but they can have many physical affects as well; suffering from an eating disorder can change the way a body works years after the patient it back on track.

Bone loss- During teen years the bones are supposed to be developing, but instead they are losing bone mass. This means later in life those who suffered from anorexia will experience more frequent bone breaks and a significantly longer recovery time, according to the Mayo Clinic’s website.

Heart- Anorexia results in a loss of muscle mass, meaning the heart gets weaker, sometimes actually shrinking, according to WebMD. This lowers the pulse and blood pressure, making exercise difficult and often resulting in anemia. This also makes the body more susceptible to infection and disease.

Reproductive system- One of the first signs of an eating disorder is when the body stops menstruating. Now, putting a pause on your period may sound like a dream, but this has long-term fertility consequences. The National Eating Disorders Association’s website says many women who suffer from anorexia nervosa cannot have children.

Teeth- Things get really serious when a teen (this includes girls and boys) moves on from anorexia to bulimia. ANAD, or the National Association of Anorexia Nervosa and Associated Disorders, says the constant coating of stomach acid will break down the enamel of the teeth and turn them yellow.

Men can also have eating disorders, though they often times present themselves in a different way. Some examples are often trying to ‘make weight’ by wearing plastic clothes, or being overly preoccupied with exercise. These symptoms can be a sign of something more serious than building muscle mass. If you’re worried about your own or someone else’s health, you can call: 800-931-2237 (National Eating Disorders Association), or (630) 577-1330 (ANAD helpline).