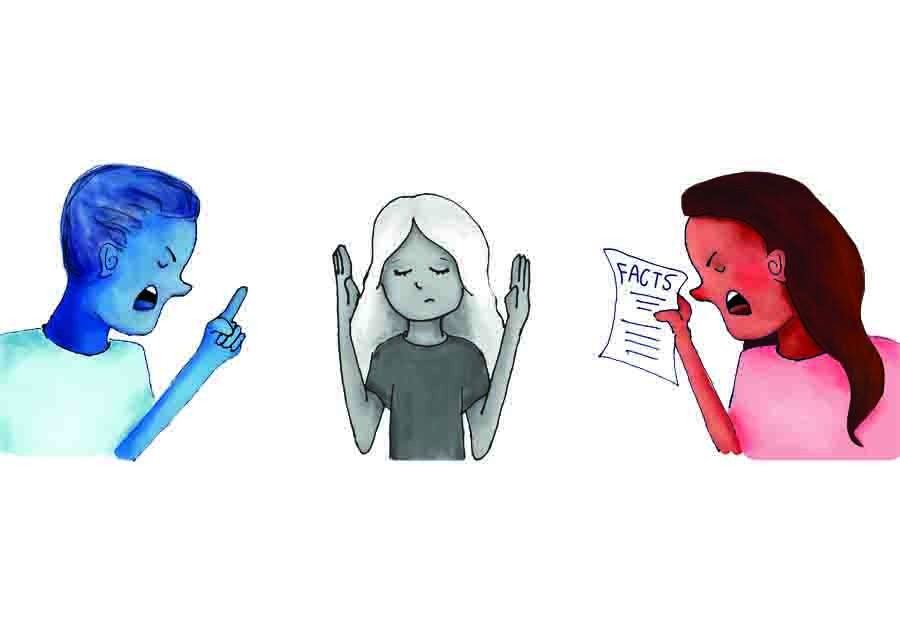 Politics are complicated. I don’t know much about them, or the platforms of the Democratic and Republican parties, but I am aware of the polarization they’ve caused in American culture. My first account of this was growing up with a conservative best friend while I came from a liberal family. Several years later, our differences caused a debate, and the friendship dissolved. Looking back at this event, I’ve decided to refrain from choosing a side on the political spectrum in order to avoid any other conflicts with strangers or friends. I have chosen to remain neutral as an attempt to promote peace.

As an advocate for compassion, the game of politics upsets me. I’ll watch classmates lash out against each other during socratic seminars, or the anchors on CNN or Fox News bicker. Then I feel confused about the unnecessary competition that has arisen, centuries after George Washington warned us not to form political parties in his 1796 Farewell Address. The disputes seem even more irrational if the competitors aren’t educated on the information and are just repeating facts overheard from their parents, friends or television.

All too often, people distance themselves from others purely based on contrasting opinions. There’s a split in our society; for example the clubs of the Young Democrats and Young Republicans here at KHS. By attending meetings and following them on Twitter, I’ve noticed their subtle prejudice toward each other. Their recent talk of a debate between the two clubs appears to be a thoughtless scheme only conspired to prove one superior. This behavior makes me frustrated because I know these students are much more than their political associations. They have best friends, good days and favorite foods, yet here they are attacking their assumed enemies for nothing but beliefs.

The revival of the Young Democrats club should be celebrated, not labeled as a reaction to the Young Republicans. The views expressed by these parties ought to be praised, if not respectfully disagreed with. Progress starts with the youth, and if American citizens cannot get along with each other at an early age, how are we supposed to make progress in the future, when we are the ones running the country?

The solution may be as simple as respect. It’s alright to have a strong opinion and express it responsibly with an educated voice, as long as that point of view isn’t used to damage someone’s spirit. When I meet new people, I try not to jump to conclusions if they state their political standpoint. I believe this only promotes more intolerance, which in turn damages the dynamics of society, and eventually, government. It’s important to respect the opinions of everyone; respect their morals and ideas unless they directly hurt somebody.

Following such uncomplicated guidelines when discussing politics may save a friendship, reveal new resolutions to dilemmas and perhaps allow two contrasting parties to compromise. Republican, Democratic or somewhere in the middle, we are all human beings who should support and love one another no matter our doctrines.

On the Keystone XL Pipeline:

“As opposed to the oil that we would be getting if we shipped from somewhere else, we wouldn’t be getting that much more oil. I don’t think it justifies the environmental costs”- Democrats

“Our economy and job market is so linked to the military, there needs to be more separation between job opportunities and the military”-On military spending” – Democrats

“It’s good that we spend some money because we’re a target, but some of it is spent unwisely”- Republicans

On the War on Drugs:

“Why would you waste federal money on something that doesn’t need to be fought?” – Democrats

“I don’t think we’re spending too much money because it’s a big deal. Drugs like meth, heroin and crack make people do bad stuff. It’s a danger to the public” – Republicans