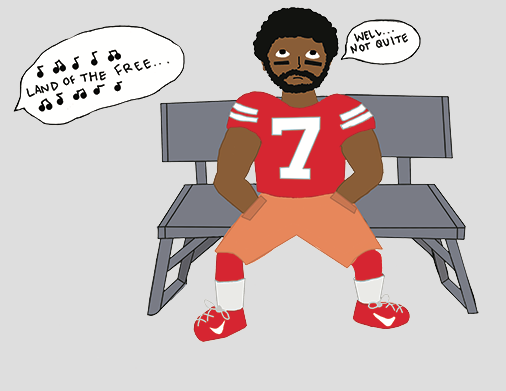 San Francisco 49ers quarterback Colin Kaepernick kneels during the National Anthem in attempt to confront the racial divides in the U.S.

Standing up by sitting down

In Birmingham, Ala., Dec. 1, 1955, Rosa Parks refused to give up her seat on the bus for a white passenger. Now, San Francisco 49ers backup quarterback Colin Kaepernick is taking a stand against racial injustices by kneeling during the national anthem. Though he was not jailed for his protest like Parks, the public took to Facebook and Twitter to post obscene and racist comments about him. Some blew the protest off as a publicity stunt, but others viewed it as an attack on individual rights and on our nation.

In America, standing for the national anthem is considered a sign of respect for our nation’s flag. But our country’s news is dominated by stories of police officers shooting innocent black men based on stereotypes or because of racial bias. Philando Castile was shot for doing what the officers asked him to. Alton Sterling was selling CDs outside a convenience store. Just last weekend Keith Lamont Scott was shot dead by police sparking mass protest and nationwide outrage. It’s no wonder Kaepernick is kneeling.

And Kaepernick is not the only one. Other athletes have followed in Kaepernick’s footsteps by taking a knee during the anthem to protest racial injustice. Megan Rapinoe, a player on the U.S. women’s national soccer team, three Virginia Tech volleyball players, and many other athletes have joined in the protest.

Numerous high school students have also protested by sitting for the anthem. Mike Oppong, a student at Doherty Memorial High School in Worchester, Mass., was almost suspended for a game for kneeling during the anthem, but because of public backlash and because it is unconstitutional for a public school to force a student to stand for the anthem, his suspension was revoked.

San Francisco’s Mission High School’s entire team took a knee during the anthem at a game. A teen was sent home from work at a Kroger grocery store in Springfield, Ohio for wearing a Kaepernick jersey on Jersey Day. A New Jersey private school district even sent a letter to all student athletes stating that sitting or kneeling during the national anthem would result in a 2 game suspension which, though not unconstitutional in private schools, is immoral and unjust to anyone who doesn’t wish to stand during the anthem.

The Beaumont Bulls, a football team of 11 and 12 year olds located in the Bay Area, California, even received threats of death and lynching for a majority of their team kneeling during their games. It’s ironic that an Alabama high school football announcer and Pastor threatened to shoot Kaepernick, a half-black man, for protesting black men being shot and killed unjustly.

It’s pathetic that people say racist things on the internet about Kaepernick because he peacefully protests racism in a way they don’t like. And it’s shameful that people use Kaepernick practicing his civil rights as an excuse to take away those of others.

Though some don’t agree with Kaepernick and those joining his movement, it is not necessary for others steal the rights of people expressing their political freedom in a way that they do not agree with. In a country where the constitution is held so near and dear to so many people, we should be protecting constitutional rights, not attacking them. It makes no sense that Kaepernick is attacked for protesting racism in America and its government, even if it is considered disrespectful toward the flag, because he is standing up for what he believes in and and is abiding by the constitution. Rosa Parks didn’t back down when she received hatred and racism for standing up for what she believed in and Colin Kaepernick shouldn’t either.

In Houston April 28, 1967, Muhammad Ali refused to be taken to Vietnam to participate in a war he didn’t believe in. The Greatest was stripped of his boxing title and his license to box, and he went all the way to the Supreme Court to argue why it was wrong for him to be forced to fight across the globe when there were racial injustices in his hometown of Louisville, Ky.

Now, San Francisco 49ers quarterback Colin Kaepernick refuses to stand and salute the American flag before each game during the national anthem. But there’s a clear difference between the actions of Ali and Kaepernick. Ali wouldn’t fight for his country overseas because his country wouldn’t fight for him at home. Kaepernick won’t respect those who have died to preserve his rights because of… police brutality and racial injustice? This doesn’t add up.

Police brutality exists and is a real problem in the U.S. Some police officers perform heinous acts and never suffer the consequences. But disrespecting the quintessential representation of freedom has nothing to do with a minuscule and misrepresentative portion of the police force that does its best to protect us.

This leads to the question of why, all of a sudden, Kaepernick is kneeling during the national anthem. In 2012, the unseasoned 25-year-old led San Francisco to Super Bowl 47 in only his second year in the NFL. In 2013, he piloted the Niners to a 12-4 record as one of the most versatile and athletic quarterbacks in football. In 2014, he set his career high in passing yards, but the team had a .500 season. In 2015, he was a shell of his former self.

The professional quarterback is one of the most highly revered positions not only in sports, but in American pop culture. In reality, each team has at least one built-in celebrity. So it comes as no surprise that when one of the most electric players in the NFL suddenly tanks, he finds a way to sponge up all the attention he can get from the bench. Is Kaepernick passionate in his protest against police violence? Of course he is. Is it right that a recognizable star in our society speaks out against an injustice? Of course it is. Is it right for him to perform this stunt on the football field? During the national anthem? Of course not.

Don’t get me wrong; I couldn’t be more proud to live in a country where we have the right to protest against the flag. But that doesn’t make it right to do so. When Kaepernick sits during the national anthem, his goal is to protest police brutality, but that’s not what he achieves. In reality, Kaepernick sits for those dying overseas so he and all other Americans have rights much of the world doesn’t have, such as the right to disrespect the American flag and everything it stands for.

Kaepernick sits during the national anthem with good intentions, but while he means to peacefully protest police brutality, he disrespects our nation’s troops fighting and dying overseas, and he disrespects the rights and freedoms we so often take for granted in the U.S. So go ahead Kaepernick, protest all you want. This isn’t Vietnam. This is football.