Glory through the story 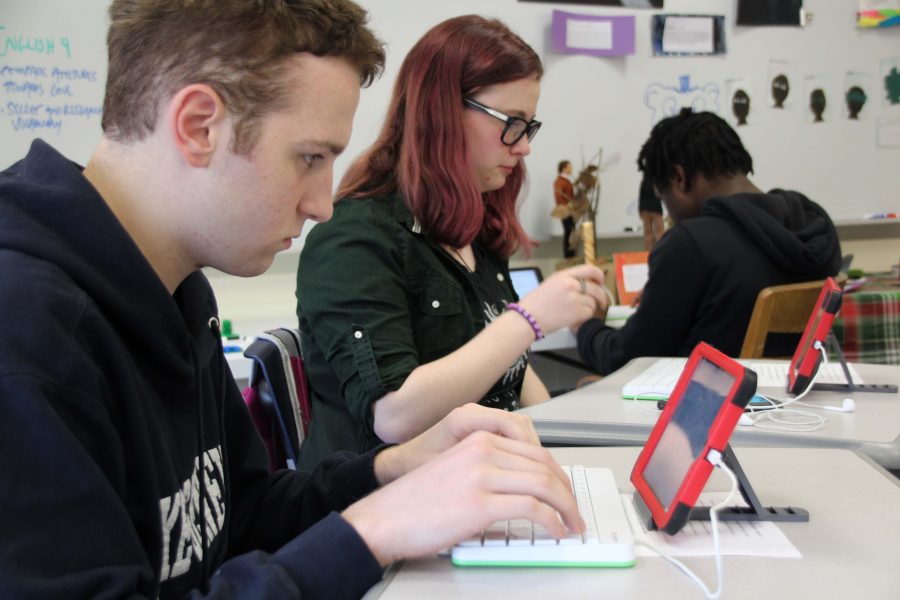 It can be loud, it’s right after school, sometimes it turns into yelling, and Madison Pratt is among the group of people all trying to get a word in. When she first came to Ellipsis, the club was quiet. Over the years she has witnessed the change and the excitement that has developed in what the club does. At meetings, they can work on their own stories and share with their peers to get constructive feedback.
Ellipsis is a creative writing club that give students a freedom to write whether they want to pursue a career in writing or not. It allows them to have the opportunity to put themselves out there and experiment with what they like and what they don’t like, Carson Anich, senior, said.
“My favorite part [of Ellipsis] is getting feedback because I always doubt  my writing,” Gillis Lowery, freshman, said. “It’s really helpful to get confirmation from other people that it is something worthwhile.”
Lowery had first heard about Ellipsis in middle school and knew she wanted to join the club when she got to KHS. She said she not only likes getting constructive criticism on her writing, but she likes how the feedback never hurts anyones feelings. Lowery came to the club with hoping to keep writing the novel she has been working on for two years.
The club meets on thursdays in Mr. Drew’s room who is the club sponsor in the English hallway. The meetings vary as do club members, which depends on how many people show up each meeting, usually that number ranges from seven to eight.
“I like hearing about what other people write because it made me realize that everybody is different in their styles and everybody writes in their own unique way,” Melodie Heaps, KHS freshman, said.
Ellipsis is a club that is dedicated to nurturing the person more devoted to the writing creatively, Simao Drew, English teacher and club sponsor, said. K-word and the journalism program offer opportunities to increase students writing skills, but Ellipsis takes a different approach focusing on short stories, character development, subjects related to formulating a story, Drew said.
“[The essence of Ellipsis is] the community, everyone having the same goal, even though people have their own different projects,” Lowery, said. “We all understand the process and want to help each other each reach it.”
Read an excerpt from Doll a short story written by one of the club members.
“Doll” Carson Anich

“HAUNTED DOLL! ONLY 5$!” The sign over the dog cage said.
It was clearly just a cheap gimmick to earn some money, a cheap gimmick I had seen more
than enough times. But still,it was a nice looking doll. It’s porcelain skin was shining nicely, it’s golden hair long and well curled, and it’s little Victorian era dress was very nicely cleaned and designed. I’m a sucker for adorable things and this doll was no exception.
I took my wallet out and counted my money, figuring that a credit card wouldn’t be accepted at a dinky little garage sale. When I found I had enough I walked over to the purchase table, where an old man was reading an old book. My heels thumping against the driveway alerted him of my arrival, prompting him to push the book away and fold his hands together.
“Good afternoon.” he said. “Can I help you with anything?” “Yes, I’d like to buy that doll please.” I nodded in its direction. “A good choice for any lover of the supernatural!”
I nodded out of politeness and gave him the money.
“Could you tell me how to get it out of the cage?”
He looked at me like I was insane.
“Why the hell would you want to do that? Do you want it to kill you in your sleep?”
“I didn’t know that the cage came with it.” Playing along was easier than arguing.
“Of course it does. I might be making a profit here, but I’m not a monster.”
“You’re a very nice man.”
I walked back and put my fingers between the cages top metal bars.
“Means a lot to hear that from such a nice woman.” He called out. “I almost feel sorry for this,
but I guess you know what you’re doing.”
The cage was light enough to lift with ease. Maybe I could sell it online.
“Have a nice day!” I said. He nodded as I walked to my car.
I put the cage in the passenger side and headed over to the restaurant. I’d been anxious
about this date all day and was stupid enough to spend the hour before out in the summer sun sweating through my dress and making my make up drip.
Luckily, arriving ten minutes before the other party allowed me to freshen up to the level of being passable.
My date being late also allowed me time at the table to keep fixing my makeup to the level of perfection.
Him never showing up made that perfection go to waste.
I ordered a salad and ate a leaf of it. I wasn’t very hungry. I paid and left.
When I reached my small home, I brought the doll cage in with me.
When I got inside I looked for a good place to position the doll. Maybe the fireplace would do.
Oh, a spot by the window could work.
I placed the cage on my large dining room table. It took me a few moments of messing with
the metal bars for the little door to open. Placing my hands over the doll, I gently lifted it up and out, as though it was a newborn baby.
“Now where do I put you?” I asked it. “Do you want to stay in the living room? It’s already got a lot of little figurines in it. You wouldn’t be lonely.”
I swayed a little, and had to sit down, placing her in front of me. “Unlike me. Good god I’m talking to a doll.”