Promising 2 trillion dollars in aid to businesses and workers, the stimulus package went out on April 6. Some feel that the bailout meant to help mom and pop stores instead disproportionately helped big businesses, causing some public controversy. Companies such as Shake Shack responded to the public’s outcry by promising to return the 10 million dollars they received from the bailout back to the government funding which ran out in the first two weeks.

As unemployment rates have risen to an estimated 13 percent this April, many states, such as Georgia and South Carolina, are discussing opportunities to reopen their economies  which has come with concern that this is being done prematurely. With unemployment taking a toll, food pantries around the country say they are struggling to keep up, with Feeding America’s chief operating office’s Katie Fitzgerald saying there has been a 40 percent increase in demand.

These economic developments come with new discoveries over the symptoms of the virus. he CDC said there are six newly discovered symptoms :chills, repeated shaking with chills, muscle pain, headache, sore throat and new loss of taste or smell. Along with the discovery of new symptoms there has also been development with a plasma treatment that, in a study of ten patients, showed an increase in antibodies that improved recovery from the virus.

President Trump came under fire for his statement in a White House briefing saying, “And is there a way we can do something like [using disinfectant]  by injection inside, or almost a cleaning? Because you see it gets inside the lungs and it does a tremendous number on the lungs, so it would be interesting to check that,” in a statement recorded by the Washington Post. Addressing the controversy, Trump has said that he was “asking a question sarcastically,” in a statement made April 24 during a bill signing in the oval office.  In a response to the recent events, Trump did not take questions in last Friday’s White House briefing. The current national coronavirus statistics have 957,875 cases and 53,922 deaths as of April 26. 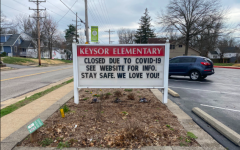