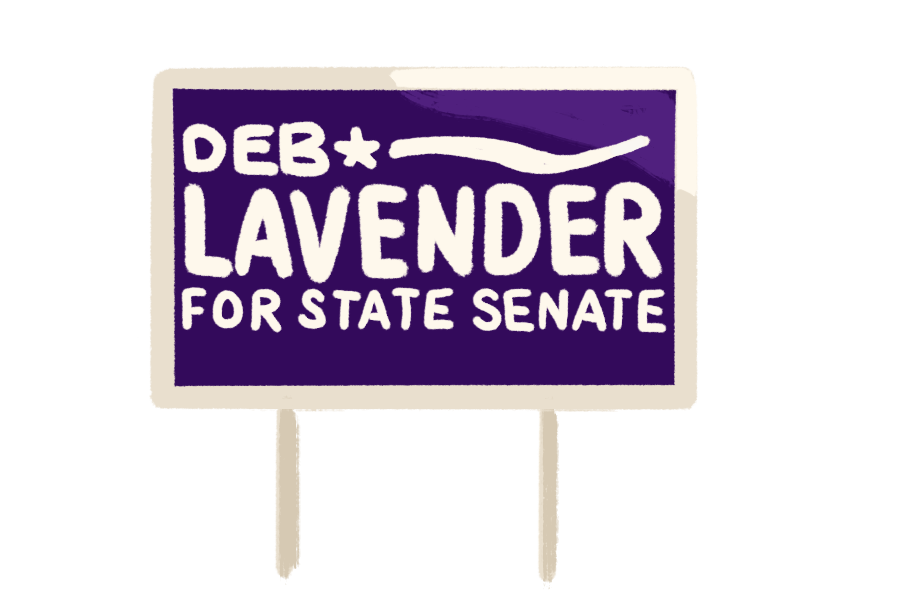 From campaigning for a local representative to utilizing their social media platforms, TKC was able to highlight a few ways KHS students participated in politics.

“DEB LAVENDER IS RUNNING FOR STATE SENATE” was written in purple letters on the large, white sign Megan Roche, senior, held in her hands. She stood in Buder Park in Valley Park waving to people as they passed by on Aug. 14. Siena Pack, senior, held the same sign on a street corner in Manchester, MO on Sept. 20.

“With the pandemic, social issues, Black Lives Matter and everything, I became interested in making change,” Roche said. “Since it’s hard to have an impact on a national scale, I wanted to focus more on our local area.”

I have had a few negative experiences while canvassing. [Like] people yelling rude things out of the window or flipping me off. It just shows how divisive politics are nowadays. But [interning] definitely has given me a better understanding of the background of elections and campaigns and all the work that goes into them.”

Lavender’s interns work six hours a week. They said they usually canvas by knocking on people’s doors. However, due to COVID-19 they are doing contactless canvassing by sitting on street corners, holding up signs trying to build Lavender’s name recognition.

“Because of the time we are in right now it’s hard to get the word out because she usually would go to the Greentree Parade [and other similar events]” Pack said. “I go to Fenton and Ballwin a lot, and those are more red municipalities. [I contribute to her campaign by] going to those areas, and being able to explain to people who don’t know about her, since she’s from Kirkwood, and explaining her policies and why she would be a good candidate.”

From high school students to older adults, Pack said Lavender’s interns and volunteers have a large age range. Lavender said she believes both young and old people should care about politics because it affects everyone’s lives.

“Climate change is something that will affect people under 30 way more than it will affect people over 30,” Lavender said. “Those are huge decisions that need to be made by people who are elected to serve our states and our nation. And if the people who this affects aren’t voting for consequential changes, nothing will be different.”

Lavender said her interns learn life skills such as communication, accountability and teamwork. She also mentioned that interning for a campaign looks good on their resumes and will help with choosing a career.

“[Interning on a campaign] is a great way [for interns] to test and see if politics are something they would be interested in,” Lavender said. “A lot of people will take their experience of having been with a campaign and go on to do political science, whether that’s in getting data or international relationships. It’s a nice foundation that could lead to a tremendous number of careers.”

Pack is planning on majoring in political science. She said that the internship gave her an idea of what a job in this field might look like, including the negative aspects of it.

“I have had a few negative experiences while canvassing,” Pack said. “[Like] people yelling rude things out of the window or flipping me off. It just shows how divisive politics are nowadays. But [interning] definitely has given me a better understanding of the background of elections and campaigns and all the work that goes into them.”

Roche also said she is interested in working in politics in the future. She said she is thankful for the ability to get political experience at an early age. She also noticed how interning for Lavender has helped her grow as a person.

“It’s definitely made me more confident to be open [about] my political beliefs,” Roche said. “Even when I first started to canvas, I was kind of timid about sitting there and holding up a sign that said I supported Deb. Now I am proud to know more about politics and be certain in my beliefs, and hopefully make other people learn about them and agree with them too.”