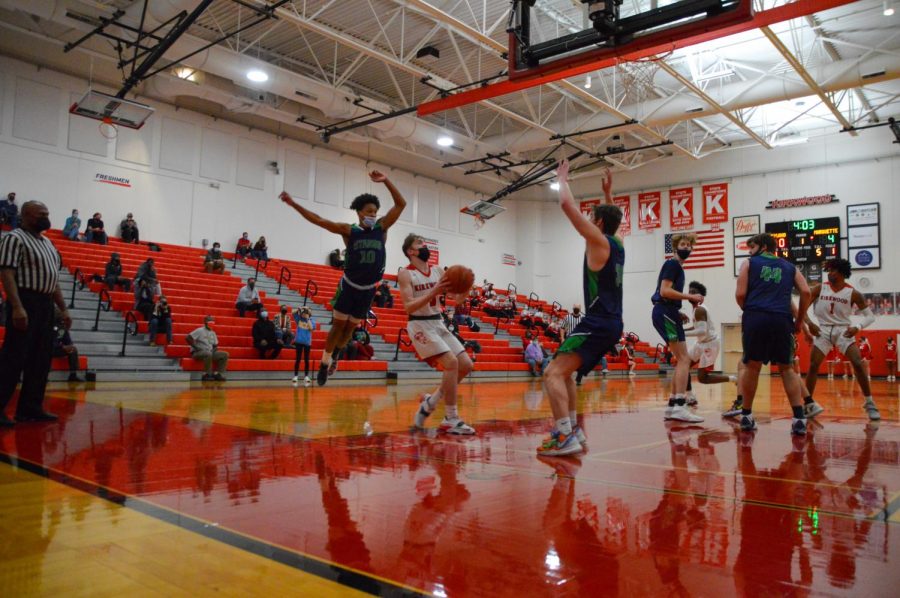 Christian Hughes goes up for a shot in the boys varsity basketball game against Marquette.

At 3 years old, Christian started following in the footsteps of his father, Chris Hughes a former collegiate basketball player, and began learning the game of basketball. As a little kid, he would spend numerous hours practicing in the parking lot. Even then he knew he wanted to play in college. As he got older, he fell in love with the competitiveness and discipline the sport requires.

“One day when I was at the [YMCA], [an older man] walked up to me and said ‘Just keep on working son, repetition is the key to perfection,’” Hughes said. “Ever since then, every time I mess up or I feel like quitting I always think back to what he said.”

Now, as Hughes gets closer to the end of high school, he strives to put in repetitions every day to be the best he can. Hughes, a 6-foot-1-inch sophomore point guard averaging five points and three rebounds per game on the varsity team, has used this year to learn from upperclassmen and focus on the mental game.

“I have learned a lot from the older kids,” Hughes said. “It can be tough, but if you take it the right way it helps you grow as a player. We started off as teammates, but now we’re as close as family. It is more than just basketball to me when it comes to my team.”

Even though he is a sophomore, Hughes looks to continue his basketball career at the collegiate level. He hopes his basketball skills will land him at a Division I school where he can continue to grow as a player.

“At first [playing basketball in college] was a dream, but now I’ve realized it can actually turn into a reality [since] I have been working a lot harder,” Hughes said. “I just want to go to any good school that would make me the best I can become.”