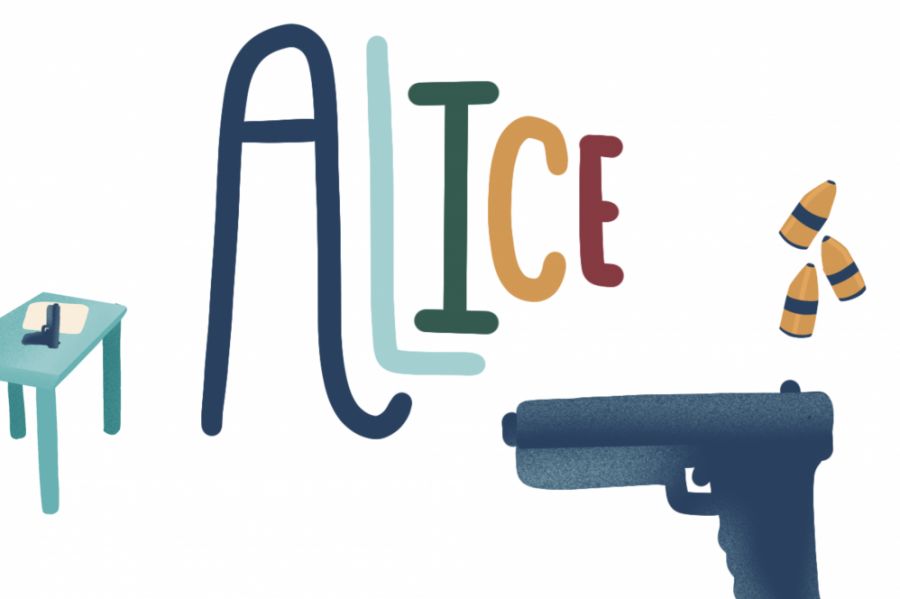 When she arrives at school in the morning, Elizabeth Button, junior, thinks about what her classes are for the day, who she will sit with at lunch and how to defend herself in the case of a mass shooting.

When she arrives at school in the morning, Elizabeth Button, junior, thinks about what her classes are for the day, who she will sit with at lunch and how to defend herself in the case of a mass shooting.

In August 2019, the U.S. saw 38 mass shooting incidents with three or more fatalities according to information gathered from the FBI and local law enforcement agencies by the New York Times. Despite regular intruder drills at KHS, many students, including Button, feel unprepared to defend themselves against an attack.

The things that they ask us to do, like throwing chairs at the shooter and actively involving yourself with the shooter are really scary.”

“Watching those ALICE videos can be traumatizing. We can have all these plans in place but what’s going to happen for a lot of students? For me, I would go blank and think, oh my God, there’s a shooter. You’re asking a kid to do a lot that [they] wouldn’t be able to do.”

ALICE, the procedure on how to respond in the case of an active shooter at school, details five key steps to effectively react to a shooter situation: alert, lockdown, inform, counter and evacuate. All KHS staff and students are trained to implement these steps. While the measures we use today are the universally accepted response, Dr. Michael Havener, KHS principal, said the school’s plan in the case of a shooting has changed as better strategies have developed.

When shooter response training started, the school would go into lockdown and students would hide until help arrived, according to Havener. By looking at past incidents, the professionals at ALICE determined that running and fighting can, in some cases, be far more effective in reducing the risk in an active shooter situation.

“All of our teachers go through training, which is not necessarily practicing, but being aware of your options [during an active shooter situation],” Havener said. “ALICE gives you those options.”

Staff at KHS learns about each option they have during a shooter situation, including running, hiding and fighting. Faculty participate in active training drills with the Kirkwood Police Department, led by Levaughn Smart, KSD safety and security officer. Ken Trump, a leading expert on school security and expert witness in the Sandy Hook and San Bernardino (North Park Elementary) school shooting cases, said this training is essential for an effective response.

Trump said many districts are willing and ready to implement physical safety products such as additional cameras or metal detectors they can show to parents and the school board. However, he said training and preparation are oftentimes more important than extremely obvious physical security.

“Superintendents, principals and school boards must invest as much, if not more, in their people and in dedicating time to safety and preparedness planning as they do in physical security enhancements,” Trump said. “Many of the security and preparedness measures schools really need to do to improve security are less flashy and fad-driven, and sometimes more discreet or even invisible.”

According to Trump, a more holistic approach to preventing shootings can oftentimes be more effective than physical security. Important parts of this include building connections between staff and students, comprehensive counseling, supervision and mental health support. For many schools, these programs are more challenging to implement than physical security due to the resources and training required, but have a greater impact in the long-term. Additionally, Trump said proactive communication between students, parents and the school helps catch red flags and stop shootings before they happen. Many of the policies and programs recommended by Trump have already been implemented at KHS.

“Communication is a key, and that involves everybody: students, staff, parents and community,” Havener said. “One of the benefits of being in Kirkwood is there is a lot of communication between all of those people. There is always a concern that you may miss some [red flags] so that’s why communication is so critical and important from the parents.”

To help catch mental health issues before they intensify into violence, and to provide additional support for students and families, KHS is hiring another part-time social worker in addition to the regular grade-level counselors, along with a social worker in the special education department at KHS. Havener said this addition to the counseling staff can help students and families in a more personal and individualized manner.

“Unfortunately, people know that [shootings are] a reality and that we’re subject to it happening here,” Havener said. “Kirkwood is just like anywhere else; it can happen, and I think it’s more on the minds of people.”

Map of school shootings since Columbine