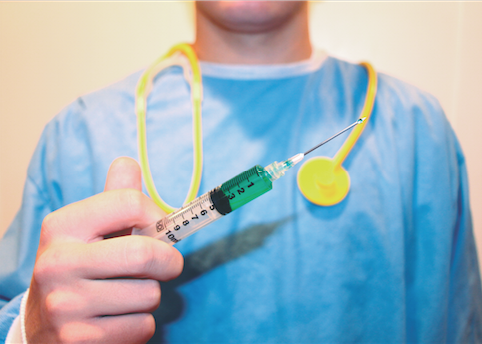 Squirming from the nurse and burying herself under a chair, a small kindergarten girl was seemingly overwhelmed by the idea of a brief prick to the arm. Ultimately being coaxed out of hiding, her shots were administered. This is Claire Neill’s first memory of receiving a shot as a 5 year old. Just a short visit to her physician, and those few moments of opposition would allow Neill to attend kindergarten at Visitation Academy in the fall.

Although Neill, senior, suspects that receiving so many shots in short time periods is overwhelming to the systems of small children, she believes it is in the best interest of high schoolers, along with adults, to be vaccinated for their own health and the well-being of the community.

“Just because you’re vaccinated does not mean you are 100 percent protected,” Neill said. “You are still susceptible to everyone’s germs and [the possible] illnesses they carry. That’s why it’s important for everyone to be vaccinated.”

Vaccines are one of the most effective tools for preventing serious diseases during childhood and later in life, according to Valerie Tribl, nurse practitioner at the Walgreens healthcare clinic in Kirkwood. Getting routine vaccines during childhood is estimated to prevent 322 million cases of disease and 732,000 early deaths among kids, according to the Centers for Disease Control and Prevention (CDC). However, according to the CDC, in 2013 Missouri was among one of the 17 states whose measles-mumps-rubella (MMR) vaccine coverage was below 90 percent.

According to NBC News, earlier this year there was an outbreak of vaccine-preventable measles triggered by an unvaccinated visitor to Disneyland. According to The Journal of the American Medical Association, an unvaccinated person is 35 times more likely to catch measles than a vaccinated person. In this amusement park outbreak, 68 of the cases included unvaccinated Americans, and among those people, 29 cited philosophic or religious objections to vaccines, according to a report done by the CDC.

Although Neill’s first memorable shot was short-lived and subtle, for Ben Backer his experience with vaccinations had lasting consequences. In kindergarten, Ben, junior, received his whooping cough immunization, however, the next evening the shot backfired. He was surprised by a seizure in reaction to the pertussis (whooping cough) vaccine, and according to Julie Backer, Ben’s mother, upon his doctor’s recommendation, he has not received immunizations since.

Julie wishes she could vaccinate her son, but his medical condition prohibits him from receiving immunizations. Ben said he is in favor of vaccinations, however, due to the circumstance of his bad reaction he feels getting vaccinated is not a practical approach.

“For me the fear of having more seizures outweighs the possibility of me getting whooping cough,” Ben said.

Ben said he suffered from seizures several years after his vaccines and the permanent damage from the seizures has affected his memory and ability to retain information.

Although Ben is exempt from vaccinations for medical reasons, there are many people who believe immunizations raise other medical concerns. A 1998 study allegedly showed a possible link between autism and MMR vaccine, according to the British Medical Journal. However, according to the Western Journal of Medicine, later the report was found severely flawed and retracted from the journal it was published. Several studies since then have also debunked the link. According to Tribl, many people still choose to believe false information, exposing them to diseases.

“Unless [the person] had a severe reaction to a vaccination in the past,” Tribl said. “I can’t think of a good reason that [one] wouldn’t want to protect yourself and others from these vaccines that have been eradicated, or at least decreased, due to vaccines.”