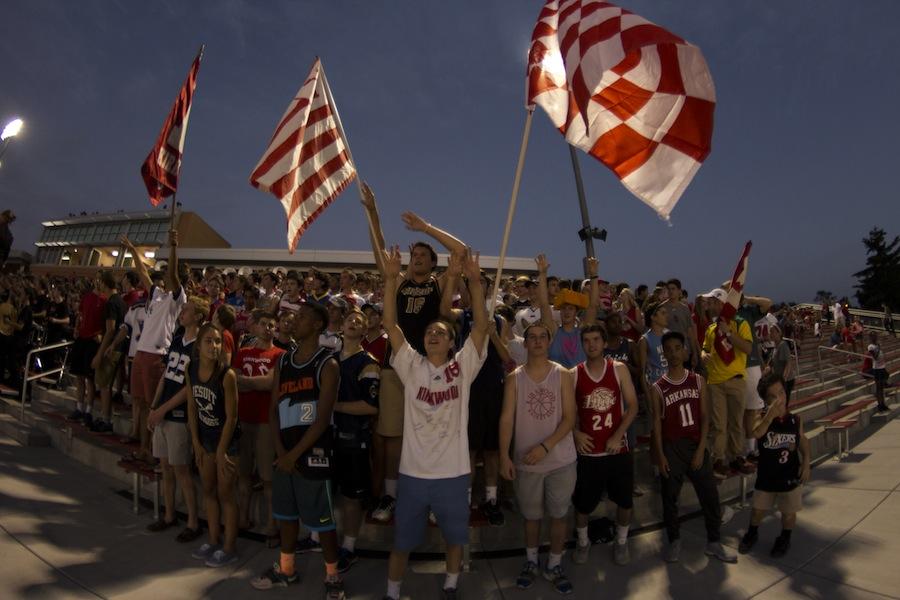 This is Pep Nation, pledge your allegiance

The echo of  hundreds of students filled the air Friday, Sept. 5 at the first 2014 KHS home football game. The sound of students jumping on brand new red bleachers can be heard from the visitors section across the field. Leading the unruly students are two seniors, Adam Ducey and Cole Reinkemeyer, standing in the front row of the section with their massive flags in hand, one with the letters K, H and S, the other with a familiar stars and stripes pattern.

The two, inspired by the enthusiasm of the basketball fan base last year, decided to raise school spirit this fall for big sporting events. This started hours before kickoff at the first game, when Ducey and Reinkemeyer decided to call up friends and tailgate. After this proved successful in terms of student turnout and enthusiasm, with more than a hundred students in the section at the first game, they made it a goal to tailgate at every home football game, as well as some home soccer games, such as the one against Clayton on September 12th. They call this new student section “Pep-Nation.”

Reinkemeyer said, the tailgates include games such as cornhole and hillbilly golf. They take place on the Essex parking lot, where the the sounds of blasting music and the smell of brats and burgers can be heard and smelled as much as two hours prior to kickoff.

The two seniors remained devoted to having a good time at this first game, even after it was rescheduled to 9 a.m. the following morning. They showed up again hours in advance on Saturday the 6 to prepare.

The tailgates are open to any student who wants to come join in the pre-game festivities. They are meant to raise energy for the entire crowd.

“Just show up, bring some food and have fun,” Ducey said.

Not only do they organize the tailgate, but Ducey and Reinkemeyer can also be seen in the front row at each home game. Traditionally, seniors occupy this space in the student section, but that does not mean the student section’s intensity comes only from them. Pep-Nation exists to raise school spirit for everybody at KHS.

“Our goal is to have everybody involved and to be the best student section in Missouri,” Ducey said. “We want to help out the team[s] too.”

Helping the team usually includes student-led cheers from the rowdy section. As designated leaders of the Pep-Nation, the two often lead the other spectators in these. These can range from traditional KHS cheers such as the famous “Where My Dogs At” to cheers made up on the spot that most of the time involve calling out of individual players on the other team.

“It makes Friday nights a whole lot better to look over and see the student section there cheering us on,” Antonio Phillips , sophomore defensive back said. “Whenever we do something good, it helps as a confidence boost when they come in.”

Pep-Nation’s influence has even reached the coaching staff of the football team. Head Football Coach Matt Irvin shares similar ideas as his athletes when it comes to the addition of a rambunctious student crowd.

“Crowd noise can be a big advantage in football when the opponent tries to communicate,” he said. “Our team has always enjoyed the positive, pro-Kirkwood spirit from our fans.

Soccer players, who are not used to larger student sections, also enjoy the presence of a student section at their games. So far Pep-Nation showed up at one of the team’s home games against Clayton, and they plan to attend more.

“It adds an energy with the fans that we never had at any point last year,” Jeff Kuziel, senior captain, said.“That’s what high school sports are all about: competing in front of all your friends.”

Ducey and Reinkemeyer plan on bringing Pep-Nation to home games for the rest of the football and soccer seasons. They have potential future plans of attending home hockey and basketball games in the winter as well.