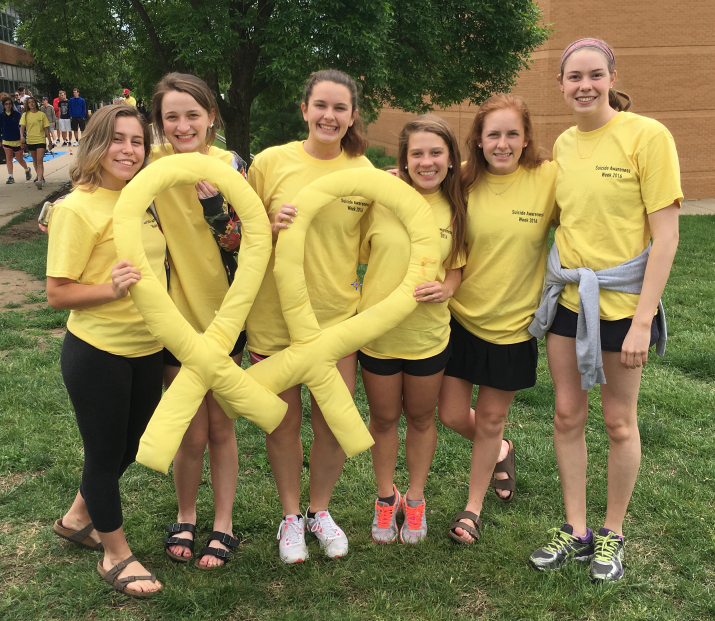 In a given year, it is estimated up to 25 percent of adolescents will experience depression, and two-thirds of these adolescents will suffer in silence without getting the help they need, according to Communities Healing Adolescent Depression and Suicide Coalition (CHADS). To combat these issues, six juniors on TKC organized a week to bring awareness to the issue of teen mental health disorders. They called it Suicide Awareness Week (SAW).

“I think people [who] don’t have a personal struggle with mental illness don’t see it as a problem within our school, and I thought that was a problem because even if you aren’t struggling with it you should be aware that it is a problem and it needs to be addressed,” Cece Hensley, SAW committee member, said. “It does make people uncomfortable, but being uncomfortable is the only thing that’s going to help us make a change.”

SAW consisted of five days: April 25-April 29. The SAW Committee has been developing it since last summer and went to a camp in October to learn about signs of suicide and how to assist those in need. The SAW committee compiled a press kit for other schools to follow in the case they wanted to do their own version SAW. Some members of the SAW committee also wrote articles about students dealing with depression in the April issue of TKC.

Each day, a different event was scheduled to bring positive energy and awareness to campus. Monday, students were encouraged to write messages on white boards about who they support and what they stand for. Tuesday, students wrote positive messages on Post-it notes and put them up around school. Wednesday, TKC staffers gave their peers cards with a number to contact in the event they needed to help themselves or someone else, along with a yellow ribbon to wear in support of SAW. Thursday, TKC staffers wrote supportive messages on the center walkway in the middle of campus and a CHADS representative spoke during homeroom to help educate all students, not just students with mental illnesses, about the ways they can help their overall health. Friday, there was a walk after school in support of SAW, food trucks and live music played by Brainwaves, a KHS band.

“Suicide isn’t just a problem in Kirkwood,” Ali Randazzo, SAW Committee member, said. “It’s a problem in America and the world and it’s a growing problem. [We are] creating an open environment in Kirkwood for people to talk about mental illness and know it’s OK to share your feelings with your neighbor and your peers and that they’ll accept everything and do everything to help you.”

Gary Behrman, a CHADS representative and SLU professor who holds a PhD in social welfare, spoke to students Thursday about resilience in the face of change and how resilience helps combat stress. He focused on four main areas: Biological health, psychological health, social health and spiritual health.

“Often we pay attention to one or two or three but not all of those aspects of our life [so] it’s very important that we take a holistic approach to our health,” Behrman said. “Stress is the biggest factor that lowers our resilience.”
Behrman defined resilience as the ability of a person to withstand a significant amount of change in their life. He also stressed resilience is not innate.

“Being resilient is about managing change,” Behrman said. “[Resilience is] not an automatic thing that we grow into. Being able to manage change is something we have to develop. We have to learn how to do it.”

Behrman became involved with CHADS after his nephew died by suicide. Behrman decided to go back to school to get his doctorate and to help others with mental illness.

“The reason I went into this work was to lower the risk of other families [who could go] through what my family went through when my nephew tragically died by suicide,” Behrman said. “He had great potential, a great future, but he got into that dark space and there was nothing that any of us could have done.”

Behrman suggests simple activities such as biking and jump-roping help build resilience. He further states having aspirations for the future helps determination and motivation.

“If you don’t have a spiritual life, a vision and a goal, it’s hard to stay motivated,” Behrman said. “It’s really important to daydream. Daydreaming is very healthy. Your spiritual resilience is based on your ability to dream, and to have a vision. No matter how your dream takes shape, have one. Have a dream, because that will inspire your daily decisions.”

Behrman believes the work done by the SAW committee is a step in the right direction. He hopes it will bring awareness to the issue of teen suicide and depression.

“I was really impressed by the articles and was impressed that [they] have this awareness week,” Behrman said. “[It was] very thorough [and] hopefully very effective.”

Hensley believes SAW will have a positive effect and believes it will help those at KHS who are struggling with mental illnesses.

“This is a real issue, but there are ways we can fix it,” Hensley said. “Even if we just touch one life and it affects one person, that means we are doing a good job, and that’s really cool to see.”