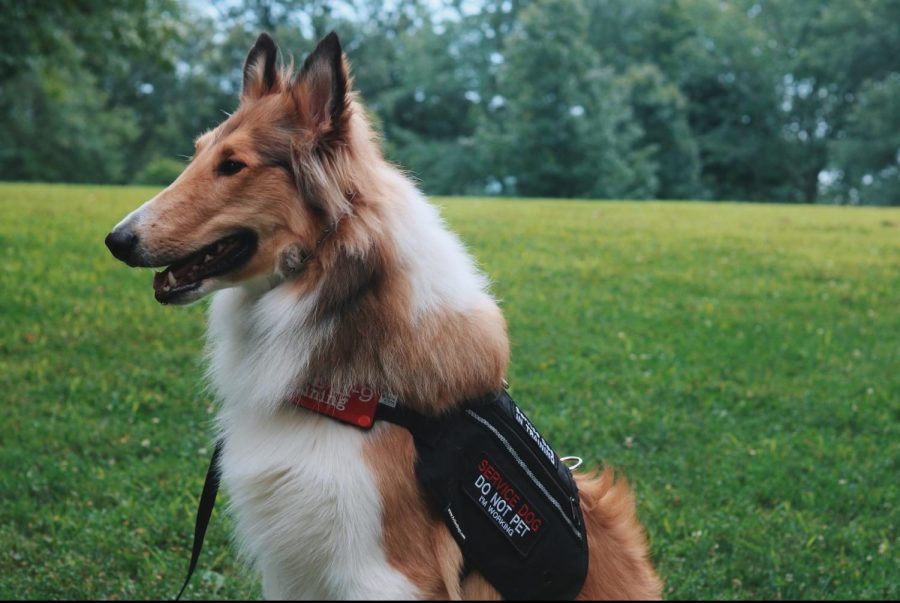 Levi, a 9-month-old Rough Collie, wears his service vest, signaling he is on-duty.

His ears are big. He dunks his full head while taking a drink. His favorite things to play with are socks, and he wants to eat soap–badly. He chases his tail, gets startled by the sound of crumpled-up paper and constantly craves attention. Levi, a 9-month-old Rough Collie, is a dog. However, his purpose strays far from merely chasing a ball—Levi is training to be a service dog.

Sebastian Davies-Sigmund, junior, stumbled upon an advertisement last fall. The ad featured two puppies, the last of their litter, who had yet to be adopted. Diagnosed with Post Traumatic Stress Disorder, Obsessive Compulsive Disorder, anxiety and depression, Davies-Sigmund had been searching for a service dog prospect, a dog with behavioral traits such as calmness and non-aggression. The search lasted months, and no prospect seemed to fit. Originally set on a Golden Retriever, Davies-Sigmund had not entertained the idea of a Rough Collie, however, after seeing Levi’s face, Davies-Sigmund said something clicked.

“My medical team [had] tried medication,” Davies-Sigmund said. “It was so hard to get through school [and work]. I’d been looking at service dogs for a really long time. I don’t really believe in fate, but I do feel it was meant to be. I hadn’t been finding what I was looking for and then [Levi] popped up. He wasn’t a golden, but I felt I had nothing to lose.”

Davies-Sigmund worked for five months at Daily Bread to raise the money for Levi’s adoption expenses. When the time came to bring him home, Levi began training to become a psychiatric service dog. Under the Americans with Disabilities Act, a canine must be trained “to do work or perform tasks for people with disabilities,” to be a service dog. The abilities of service dogs must directly correlate to its owner’s disabilities, such as Levi’s ability to interrupt behaviors.

Levi has been trained to interrupt panic attacks by sitting atop his owner, alert Davies-Sigmund of behavioral ticks such as leg tapping or arm scratching by hitting him with his paw and form a barrier between Davies-Sigmund and strangers in public. However, according to Davies-Sigmund, Levi’s training is far from over.

I don’t really believe in fate, but I do feel it was meant to be. I hadn’t been finding what I was looking for and then [Levi] popped up. He wasn’t a golden, but I felt I had nothing to lose.”

“He’s still very much in training, but it is going quite well,” Davies-Sigmund said. “Teaching him commands has been a complete breeze. He is in the process of learning how to get medications from across the room. Hopefully, when he’s fully trained, he will know how to get another person’s help, so if I’m having an episode or a problem he can go find another person and bring them to me.”

According to Davies-Sigmund, Levi’s training plays the largest component in his service dog abilities, though a somewhat unexpected capability recently revealed itself: Levi’s seemingly untrained intuition.

“He’s recently been naturally alerting me when my heart rate rises, I didn’t teach [him] that,” Davies-Sigmund said. “He’ll come up and put his head on my bed and stare at me until I feel my heart rate [has been rising]. Sometimes when I stand up my heart rate will skyrocket and I’ll get super faint. When I feel it hit he’s always right there [to stabilize me].”

Davies-Sigmund said while his skills, both trained and untrained, seem incredible, they do not fully overshadow his puppy nature either. Just earlier this year Levi ate a 3-foot-long string while crated, and his obsession with licking soap has not dwindled. However, when his vest goes on it means business, and Levi’s training becomes top priority.

“He’s mastered most of the things a basic service dog should be able to do,” Davies-Sigmund said. “He can go out in public, he doesn’t sniff things, doesn’t pull on the leash, he heels properly, he walks quietly next to me. [But] when he is off-duty and allowed to greet other people, he turns into a huge love bug. He’ll run in circles and chase his own tail. He’s a silly boy.”

Get to know Levi:

Dislikes: being told ‘no’, getting his nails clipped, laying down and chilling with other dogs around, when he can’t eat right away, not being allowed to lick soap, newspapers/paper making noise

Who’d play him in a movie: James Franco 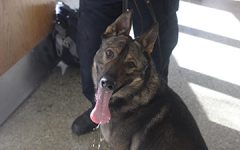 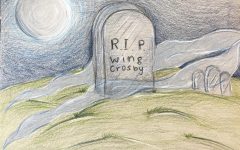