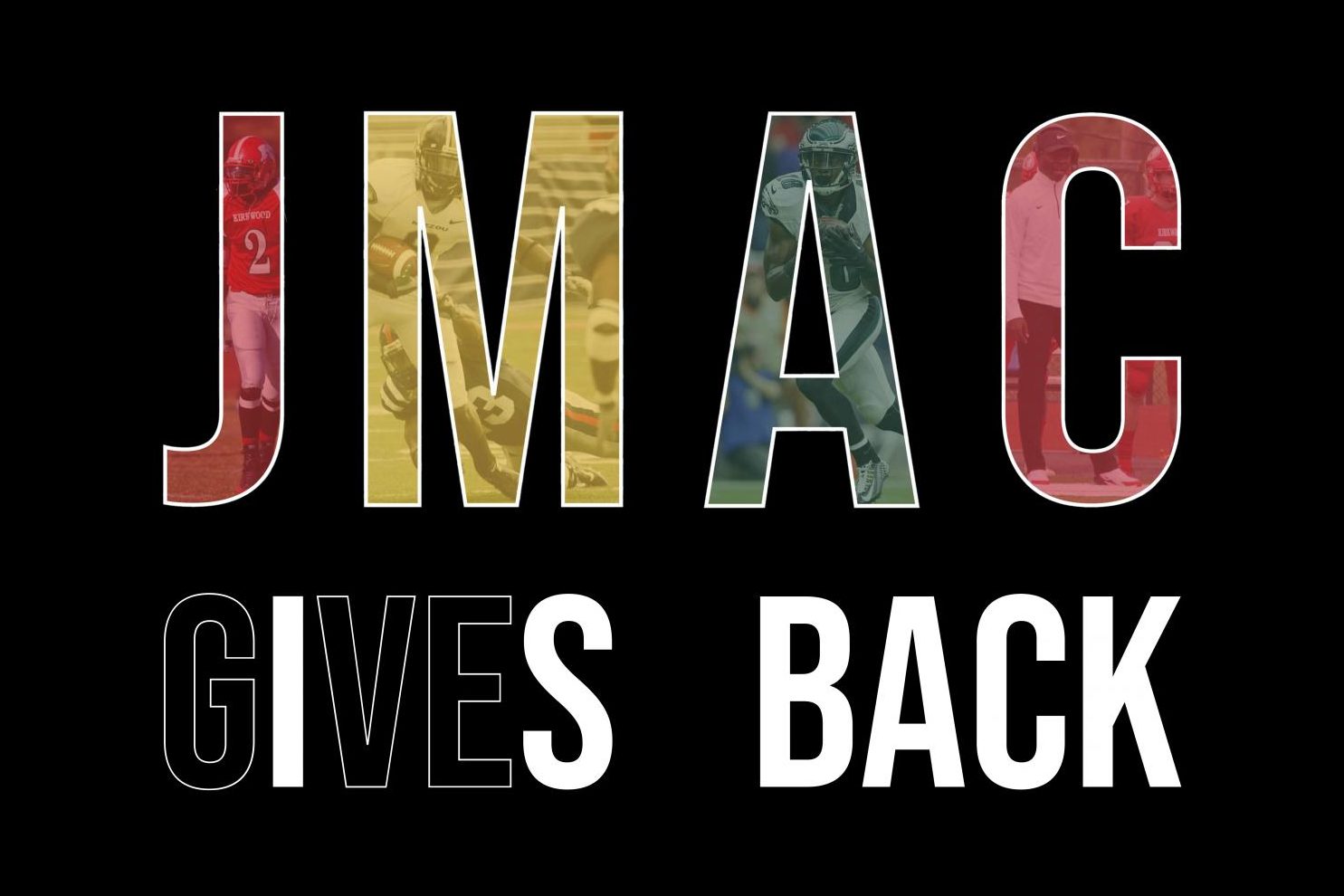 Before all the fame, Jeremy Maclin, 2006 KHS graduate, walked the same halls KHS students do today. (Visual by Hayden Davidson.)

Before all the fame, Jeremy Maclin, 2006 KHS graduate, walked the same halls KHS students do today.

JMac: Back to where it all started

For the past decade, people across the country, especially Kirkwood residents, have turned on the TV every Sunday in the fall to see the name “Maclin” on their screen. But before all the fame, Jeremy Maclin, 2006 KHS graduate, walked the same halls KHS students do today. Now, he is back as a football coach, serving the team that built the foundation of a nine-year-long NFL career. He has been helping the community the past several years with his organization JMac Gives Back, and now he is at KHS every day to coach student-athletes.

“He loves it,” Jay Maclin, Jeremy’s cousin and current senior, said. “He just feels good to be back home.” 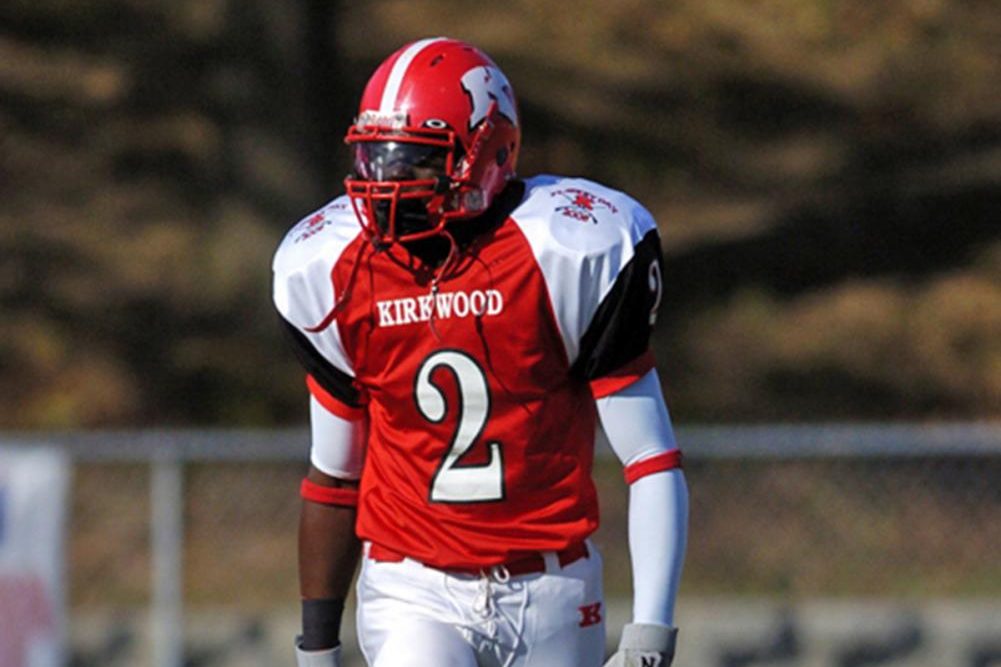 It’s August 2002. The majority of current KHS students were not even born. Jeremy walked into KHS for the first time and, like every other freshman, wondered what his future would hold. He had a better idea by the end of his sophomore year when he received his first college football letter from the University of Illinois.

I think I realized how good Jeremy was when I got to Missouri State, and I was like, ‘Where is Jeremy? Where’s my receiver at?’”

Flash-forward to November 2005. Jeremy had made his mark as an athlete in football and basketball. He had just recorded his second consecutive varsity football season with over 1,000 receiving yards. Despite the impressive numbers, Jeremy said he was disappointed.

“We did not win the state title, and I still think about that to this day,” Jeremy said. “That’s one of the things I try to tell the kids [at Kirkwood] now is that you want to make the best of all your opportunities. When you don’t achieve the things that you want to achieve and you know you’re capable of doing it, you always have that thought in your head, ‘What if?’”

Jeremy’s high school quarterback was current KHS walking counselor and football coach Matt Krapfl, 2005 KHS graduate. Krapfl led the St. Louis area in passing yards his senior season with 3,147 and went on to play at Missouri State University. Even after a high school season like Jeremy’s junior year (with 1,184 receiving yards and 21 touchdowns), Krapfl said it is still hard to predict where a player will go from there.

“When you’re young, you don’t really realize how good somebody might be,” Krapfl said. “I think I realized how good Jeremy was when I got to Missouri State, and I was like, ‘Where is Jeremy? Where’s my receiver at?’” 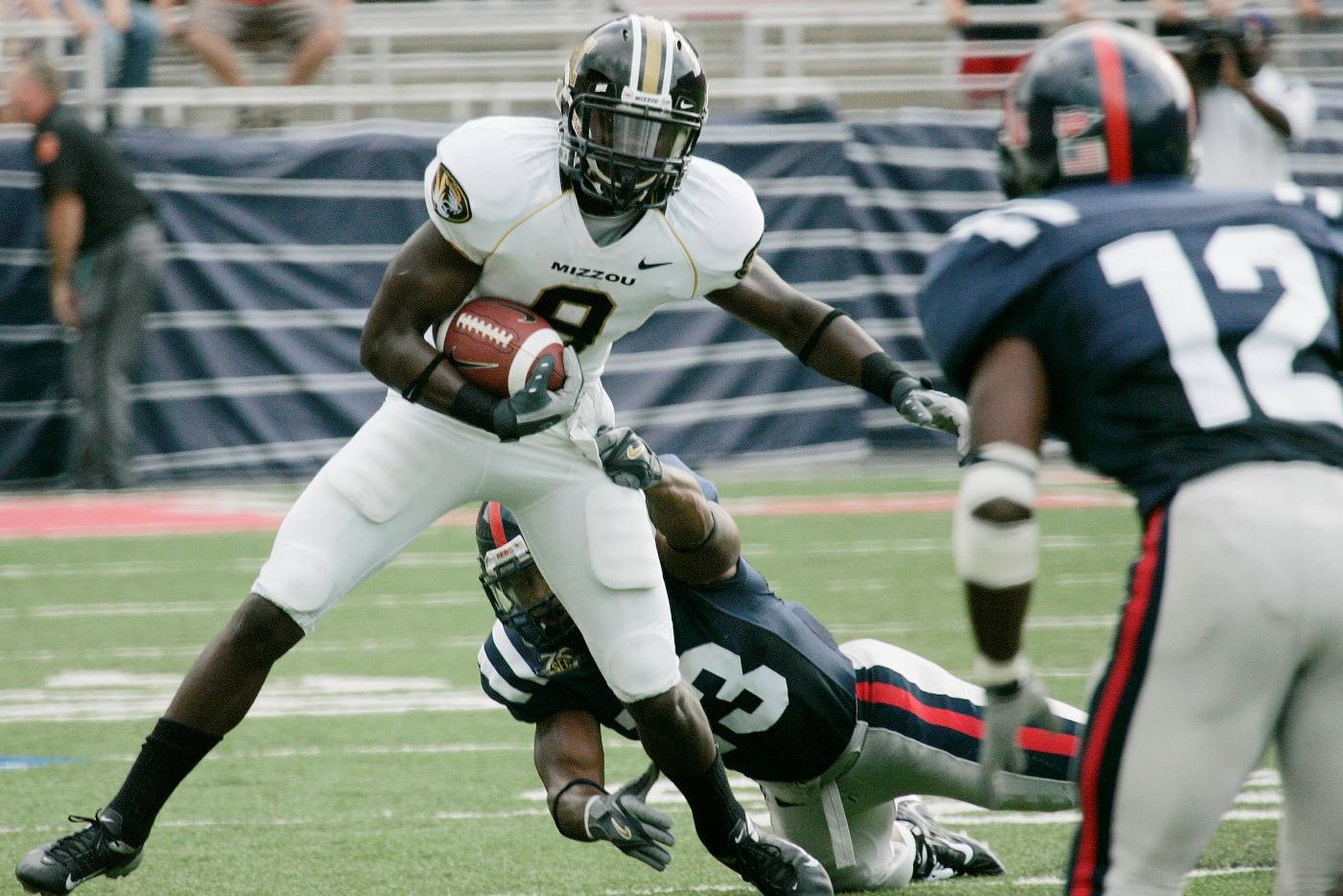 In the summer of 2006, Jeremy headed to Mizzou on a football scholarship with an interest to study accounting or marketing. During a summer practice before his freshman year, he suffered a setback that all athletes fear: a torn ACL.

“One moment, everything that you want [to do], you can do and participate in, and the next moment, you can’t do those things,” Jeremy said. “You can’t take anything for granted and you’ve got to live life to the fullest. That’s what I took away from tearing my ACL, and I think that helped me in life in general.”

His torn ACL only slowed him down temporarily. He recovered and came back to play his freshman season in 2007, in which he set the NCAA record for most all-purpose yards (receiving, rushing and kick and punt returning) by a freshman at 2,776. His draft value rose after an even better sophomore season, and he was selected by the Philadelphia Eagles with the 19th overall pick in the 2009 NFL Draft. 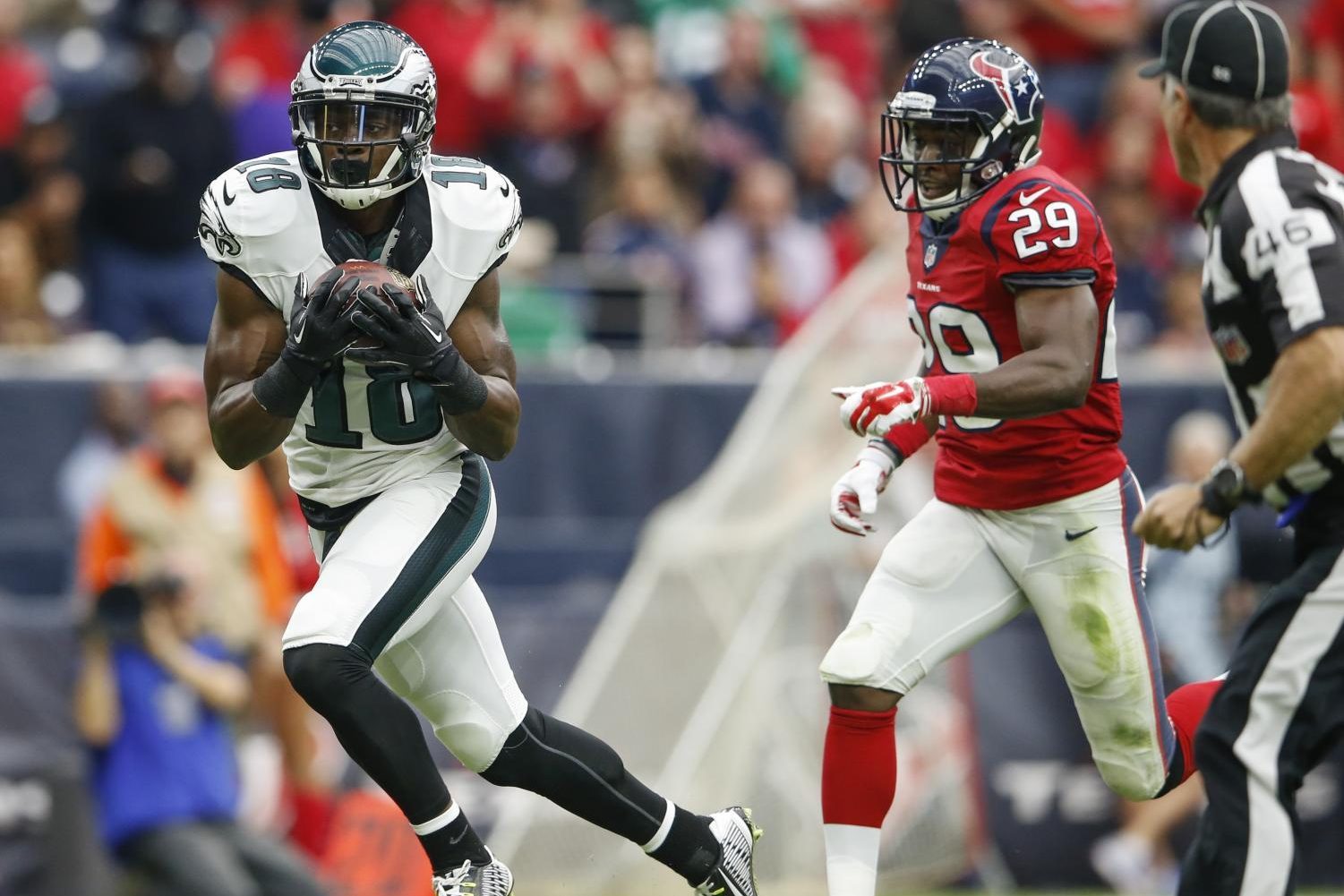 Jeremy quickly made his mark in the NFL, scoring 10 touchdowns in his second season. Despite his early success, Jeremy recognized the challenges of staying valuable in the NFL.

“Once you get to that level and it becomes a business, they’re always looking for somebody to replace you,” Jeremy said. “It’s all about who can I get to replace this guy—younger, less expensive [players]—so the mindset you’ve got to have is you’re going to work like nothing’s promised.”

Just when he was entering the prime of his career in 2013, Jeremy tore his right ACL, the same injury on the same knee as his first year at Mizzou. But Jeremy said he was built for a strong recovery because he had already gone through the same process. When he returned in 2014, he had the best statistical season of his career with 1,318 receiving yards and 10 receiving touchdowns.

He had another season with similar statistics with the Kansas City Chiefs in 2015 after signing with them in free agency. Jeremy played one more season with the Chiefs and one with the Baltimore Ravens before retiring due to injury March 24, 2019.

“[My career] was quick. Looking back on it, I can still remember playing games at [KHS],” Jeremy said. “If you count the years, it’s been a long time, but time goes by fast when you’re enjoying yourself and you’re having fun and you’re doing what you love to do. It never lasts long enough, you always want more.” 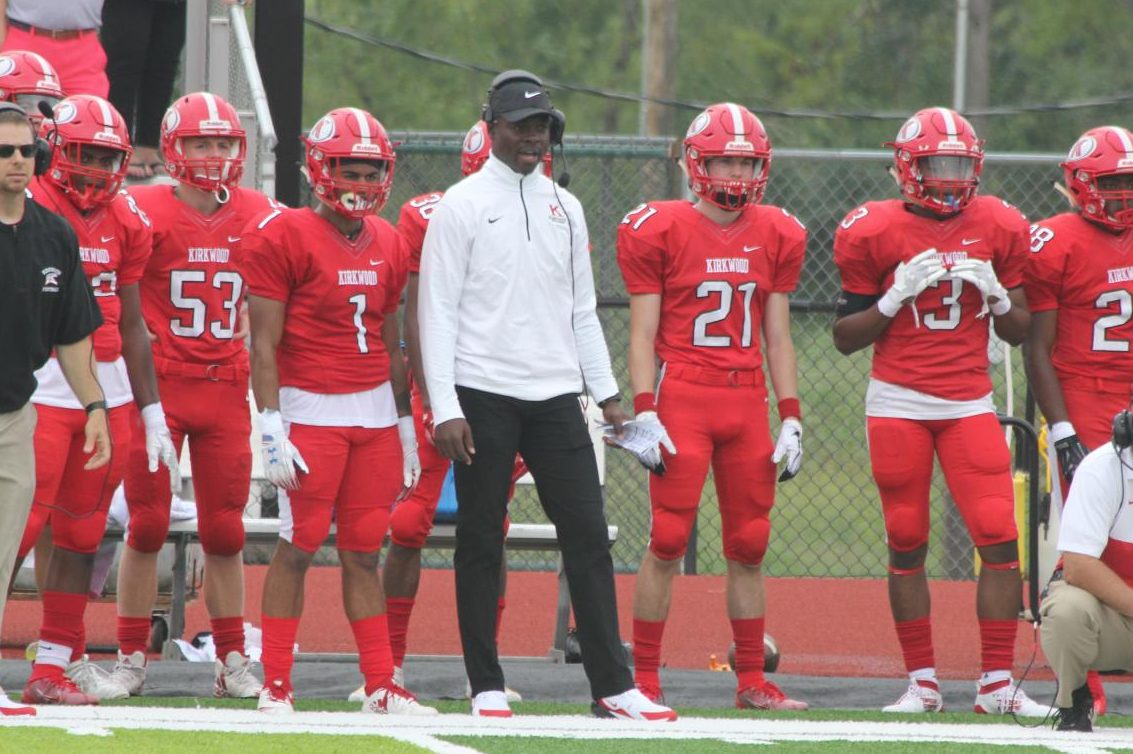 Randy Kriewall, Jeremy’s basketball coach at KHS, remembers one of his first conversations with Jeremy during his freshman basketball season.

“[I was] thinking this is a big moment for the kid, here’s the varsity coach. And I said, ‘We really want you to come up and play on varsity,’” Kriewall said. “His response was, ‘Well, I can’t until the freshman season is over because I made a commitment to these guys when we started the year, and I’m not going to break that commitment. So when we’re done [with the freshman season], I’d be happy to do that.’ And I [thought], ‘Who is this guy? What kid, as a freshman, thinks that way?’”

Kriewall said he was impressed right away with how Jeremy put other people first. In the same way, after walking away from playing professional football, Jeremy returned to KHS to help other people through coaching. As a coach, Jeremy primarily works with wide receivers for the KHS football team, and he coaches other aspects of the team as well. Jay Maclin, also a wide receiver, is currently playing his senior season at KHS this year before continuing the family tradition of going to Mizzou on a football scholarship. Jay said he has noticed how all of his KHS teammates respect Jeremy, knowing he made it to the highest level.

“He doesn’t need a job, but he just wants to help,” Jay said. “He wants our team, he wants Kirkwood to be great. He knows that people look up to him here, so him being here is appreciated by everyone.”

According to KHS Principal Dr. Michael Havener, what Jeremy brings to the table as a coach goes beyond football experience, but life experience as well. Havener said Jeremy has a bigger impact on helping people due to his hard work and everything he has overcome.

“Obviously, he’s knowledgeable about football, and that’s great, but I think he’s more of a mentor and [he] will take students [and] impact their personal lives. [They will] learn from him and grow into outstanding individuals who are successful,” Havener said. “Whether we score an additional touchdown because he’s a coach, that’s great, but the more important thing is that mentorship he provides to not only football players, but people in general.”

First, Jeremy was a Pioneer. Then he became a Tiger. After that, an Eagle, a Chief and a Raven.

And now, he is a Pioneer again.

“It’s surreal, going back to where it all started.” 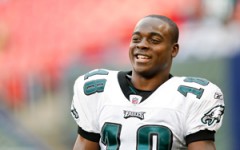 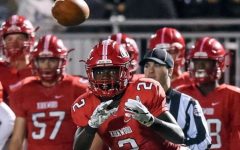 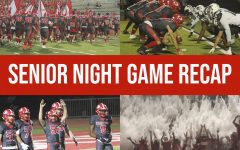